And Her Colorful Chef Jackets

Chef Leah Chase, the undisputed "Queen of Creole Cooking," proudly wears a red chef jacket as she holds court at Dooky Chase Restaurant, in the Treme neighborhood of New Orleans. “I set myself apart wearing a red jacket, instead of boring white or black,” she says. “I like being different than most of the male chefs. There isn’t any reason I shouldn’t enjoy my love of color just because I am cooking in the kitchen.”

A look in her closet will reveal more than one red chef’s jacket, alongside her pink, green, orange and other color tops. Make no mistake; there is nothing boring about her fashion style of forsaking the ordinary for color. “When you are 93 years old, you can pretty much do whatever you please,” she adds with a smile.

The queen of good eating might be the most newsworthy chef in a city that’s jam-packed with extraordinary chefs. And why shouldn’t she be? She has spent more time making a roux for gumbo than any other chef in town. “The kitchen is my home,” she says. “I may not be as spry as I once was, but there is nothing wrong with my mouth to know how good New Orleans food is suppose to taste.”

A native of Madisonville and eldest of 11 children, she considers it her good fortune to have met Edgar “Dooky” Chase Jr. He was a young trumpet player and bandleader whose parents owned a sandwich shop in a small building, which today is Dooky Chase Restaurant. “He was a dashing young musician who caught my eye,” chef Leah says. “We married in 1946, and I found my forever home in the kitchen of his parents’ restaurant.”

Now 70 years later, chef Leah is still leaning over her pots and pans – even though her talented grandson Edgar “Dooky” Chase IV, a graduate of Le Cordon Bleu in Paris, is now working at her side to ensure there will be a Dooky Chase Restaurant for many decades to come. His presence allows chef Leah more time to hold court in the dining room and pose for cell phone snapshots. “I have always enjoyed meeting people,” she says. 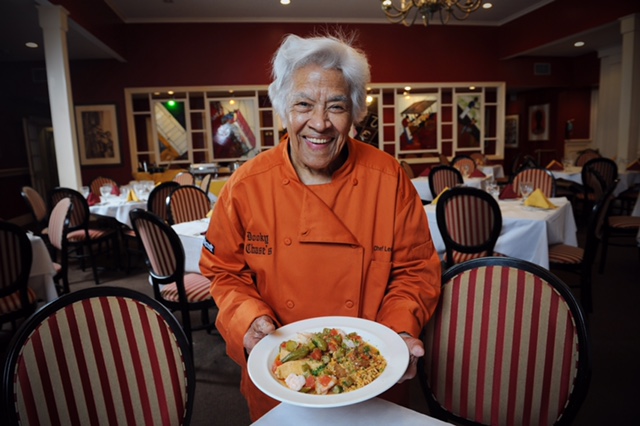 The guest list over the years has been impressive – including President George W. Bush, Barack Obama, an array of who’s who musicians and even Reverend Dr. Martin Luther King Jr.

So many awards have come chef Leah’s way that it would take a multitude of pages to list them all. It’s hard to rank the awards, yet the James Beard Foundation’s Lifetime Achievement Award would have to be near the top of the list. “I’m proud of my food related awards,” she says. “Yet receiving honorary degrees from Tulane University, Dillard University, Loyola University, Our Lady of Holy Cross College and Johnson and Wales University has meant a lot to me.” She loves that the Southern Food & Beverage Museum in New Orleans named a permanent gallery in her honor, and she received the Times-Picayune’s Loving Cup Award for her service to the community. She is also quick to mention that The American Civil Liberties Union of Louisiana presented her with the Ben Smith Award, its highest honor, for her work to promote racial equality.

No wonder the culinary Creole grande dame of New Orleans wears red when she greets guests who come to partake in the daily lunch buffet Monday through Friday, or Friday night dinner. “It’s a joyful, red letter occasion each time I step out into the dining room to greet my dining guests,” she says. “I like to show that I may be old but I am still playful. Red says it all.”