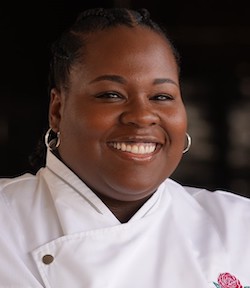 As a child, Jamie Warrick wasn’t one to sit in front of the television watching cartoons. Instead, she regularly watched Julia Childs and other chefs on PBS. She was eager to try the foods they demonstrated, and her childhood fascination ignited a lifelong passion.

“I always knew that I wanted to work with food,” said Warrick, the new chief of product development for L.H. Hayward & Company, which includes Camellia Brand, Dagostino Pasta and Gulf Coast Blenders.

Warrick’s culinary path also routed through her mother’s kitchen, where she chopped vegetables and helped cook for the family. Those early experiences prepared her well for the fourth-generation, family-run company that celebrates its 100th anniversary in 2023.

Her research and development work includes formulating products for all the company’s brands, including expanding the new line of Camellia Brand Seasoning and Dinner Mix products.

A New Orleans native, she credits home economics classes at the high school she attended in Houston after Hurricane Katrina with reigniting her culinary interests. After graduation—proudly with a diploma from Warren Easton High School—the first-generation college student attended Northwestern State University, where she earned a degree in business administration with a minor in culinary arts.  She later enrolled in the Louisiana Culinary Institute in Baton Rouge.

From there, Warrick followed a culinary career through the casinos—first as a prep cook at L’Auberge in Baton Rouge before moving to Baltimore as sous chef at Johnny Sanchez restaurant and then on to Guy Fieri’s Baltimore Kitchen, both part of Caesar’s Entertainment.

New Orleans eventually lured the chef back home, where she worked with then Harrah’s food services until 2020 when the casino closed due to the pandemic.  Shortly after returning to New Orleans, the chef also discovered she was pregnant and is now mother to five-year-old Jaxon, who she describes as “my life and my greatest recipe.”

Just prior to the pandemic, Warrick decided to return to school again, enrolling in the culinology program at the University of Holy Cross.

“This degree is based mostly on product development and involves the science of food,” she said. “My whole goal with food is making sure that I give back to the community, particularly making more women of color aware of the food sciences field.”

The culinology curriculum at Holy Cross focuses on culinary arts and food science, as well as food product development including business management, nutrition, processing technology and government regulations. All those elements blend well with her role at L.H. Hayward & Company, as does her devotion to family.

“I operate better when I feel like I’m part of a family. And everything is family here, professionally and personally,” said Warrick. “The work-life balance of being a product development chef is amazing as compared to that of a restaurant chef.”