And his cowboy boots

Chef Duke LoCicero carefully places his cowboy boots on top of the grand piano in his Café Giovanni Restaurant on Decatur Street in the French Quarter, and then turns around and smiles as he says: “Only the best cowboy boots go home with me.”

A showman, a character bigger than life and a great chef, Chef Duke has been showing off his talent for cooking, stylish dressing and making his presence known all of his life. “I went into the kitchen to wash dishes for Davis Lee at the House of Lee Restaurant at Veteran and Causeway Boulevards when I was 13 and never left working in restaurants,” he says.

Actually, he did leave when he was 18 years old and a new graduate of East Jefferson High School to go to the Culinary Institute of America in Hyde Park, New York.

“I am a proud local boy,” he says. “I grew up on Lake Villa Drive in Metairie in the same house where my mother lives today.” His now deceased father had the distinction of being the only man who lived to tell about being hit by 13,800 volts of power while working on a construction job in Plaquemines Parish. “He was in the hospital for a full year and when I was born, he named me Dabney Ewing in honor of the doctor who saved his life.” Then he quickly adds, “But he never called me anything but ‘Duke.’” 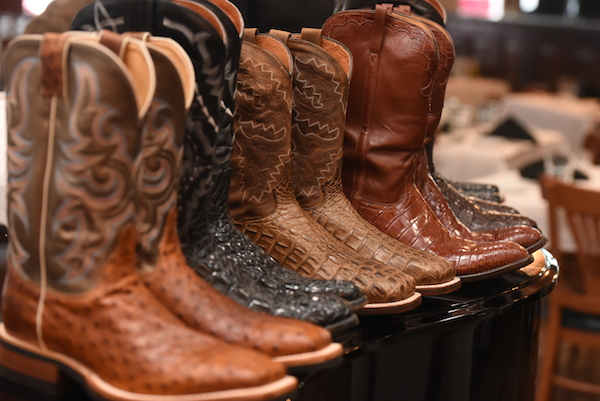 With $5,000 worth of cowboy boots on the piano, he considers himself somewhat of a fashion plate in New Orleans. “Call my style Italian casual,” he says, as he shows photos on his iPhone of a man ready for the pages of GQ or Esquire magazines. “Casual doesn’t always mean cheap. I love clothes and I’m proud to say that I have $300 shirts hanging in my closet.” Maybe it would come as a surprise to Italian fashion authorities that he always has a pair of cowboy boots on his feet and not Gucci loafers.

Why does he love cowboy boots? “I feel like I am 6-feet, 7-inches tall in cowboy boots,” he playfully explains. “In my mind, the boots just complete the perfect look. By the way, I should add that I am the man who never wants to ride in the bus; I want to drive it and always know where I am going.” Confident? No doubt about it. Then Chef Duke whips out his iPhone again to show off a photo of his new Stingray sports car and his 1970 Cadillac convertible. “Both are red and the Cadillac even has red alligator upholstery,” he adds. And parked outside is his new shiny red truck with Café Giovanni in big black letters on the side.

Chef Duke’s playful soul is ever evident with everything. “I don’t want you to think I am always flashy,” he says, as he pulls out a stack of credit cards and a hunk of money held together with a rubber band. “This is my fashionable Italian billfold and the only one I have ever used.”

Nothing is ordinary about Chef Duke or his restaurant. The reason there is a grand piano in the middle of the restaurant is that he features opera singers Wednesday, Thursday and Friday performing while diners enjoy his food. “I wanted something different when I opened the restaurant in 1991,” he says. And it is obvious that he was correct – the place is often packed to hear the opera singers. “Lots of restaurants have jazz music,” he says. “I’m the only one with opera.”

Always quick to try something different, it was 1983 when he got his first pair of cowboy boots. “It was love a first sight,” he says. “It was just a couple of years after the movie Urban Cowboy, starring John Travolta, came out. There were plenty of great places in New Orleans to go country dancing, from “Denim and Diamonds” to “Hired Hand” to “Mudbugs.” Then in 1991, I bought the first pair of cowboy boots for myself; they were red eel skin and beautiful.”

And what is he going to wear when he and Kelly, his wife, attend an upcoming wedding? “My best cowboy boots,” he proudly says, and then adds. “With an Italian-made sports coat, nice slacks, a great shirt, no tie, but a silk handkerchief in my pocket. I may be the best dressed man at the wedding.”