Electric Girls is working to create the next generation of women in STEM fields.

And it’s not just the engineering field that is lacking in female representation. Women continue to be underrepresented in the fields of science, technology, engineering and math, also known as “STEM.”

For the past few years, two local women — Flor Serna and Maya Ramos — have been fighting to get more girls in the New Orleans area focused on STEM areas with a program they created in the spring of 2015 called Electric Girls.

“Studies show that girls lose interest in math and science during middle school, and STEM interest for girls is low, compared to boys,” said Serna, co-founder and executive director of Electric Girls.

While working as a recording engineer all through college at Loyola University, Serna was very aware that she was the only woman in her department. In an effort to understand why, she did her undergraduate thesis on why women don’t pursue engineering. That research evolved into a pilot program, which is now Electric Girls. Serna and Ramos, the organization’s chief operating officer, founded Electric Girls to develop leadership skills in young girls by teaching them about electronics and computer programming skills. The pilot program, a summer camp in 2015, had only six girls. Those girls learned the skills to build their own inventions.

“In the beginning, we had a plan to have every one of them build a light-up friendship bracelet,” Serna said. “But the girls weren’t interested in that. They wanted something with more creativity. One girl talked about making an automatic bubble machine, and I thought about it and realized she could do it. So, we worked on basic electronics, the circuitry and how to apply voltage, and she made a bubble machine. We now teach the basic skills and the girls use those to create what they want.”

Early on, Electric Girls won funds from Propeller’s PitchNOLA, a competition that awards cash to emerging and developing entrepreneurs who tackle social and environmental disparities in the Greater New Orleans area. Serna and Mayos used their winnings to expand their financial aid offerings in order to ensure 50 percent of the campers in financial need were given scholarships.

“Entrepreneurs like Flor and Maya are key contributors to building a more equitable education system in New Orleans,” said Crystal McDonald, director of entrepreneurship at Propeller. “It’s critical for young New Orleanians to develop the skills required to pursue fulfilling careers with living wages, and Electric Girls’ work is a leading example of how we can make that possible.”

Since that first camp, Electric Girls has grown to include not just a summer camp, but one-day workshops, weekend programs, in-school programs and after-school partnerships. Serna estimates that 1,500 girls between the ages of 5 and 14 have attended an Electric Girls event. The organization now has two full-time staff and two full-time AmeriCorps workers.

At one recent workshop entitled “Light Up Mardi Gras,” girls learned how to light-up a Mardi Gras costume, bead-catcher, or article of clothing.

“They learned a little about electronics and circuitry, and built an LED circuit,” said Serna. “Then, they hot-glued the circuit and LEDs to whatever they brought to the workshop.”

“Lycée Français is thrilled to have been partnering with Electric Girls since 2015,” said Claire Dahm, director of the extended day at the school. “Electric Girls activities are always the first to fill up at our enrichment program registration. Our students and parents love the STEM-driven projects, as well as the knowledgeable, inspirational instructors who are role models in technology. Students are always excited and eager to work during class and parents often comment on the quality skills their children acquire, as well as the increase in their confidence in a science-related field.”

The summer camp that started it all is still very much a part of the organization. At the Electric Girls Summer Camp Powered by Shell, held at Loyola University, girls are separated by age into groups where they learn skills in electronics, computer programming, power-tools, design and leadership. They design, invent and build their own take-home electronic inventions after learning how to solder and program basic circuits.

This summer, Electric Girls will also launch a mentoring program called “Leaders In Training” composed of youth over the age of 14 who have participated in Electric Girls programming before as a participant, volunteer or intern.

The camp is not all work; the girls have plenty of time for games and visits from other successful female engineers. They make new friends and become a part of a growing community of young learners and leaders in technology. Electric Girls counselors are all female role models who foster a safe environment for girls to learn and explore.

Kerry W. Kirby, founder and CEO of 365 Connect, a company that provides marketing, leasing and resident technology platforms for the multifamily housing industry, has supported Electric Girls from its inception.

“Nothing is more important than fostering and inspiring our youth to engage in educational programs that will encourage them to build a variety of skills and create a foundation for a successful future,” he said. “Flor Serna is a true leader in our community, and she has put her heart and soul into creating programs for young girls to not only learn, but to also gain confidence in all of their abilities. We are proud to partner with Electric Girls to make these programs accessible to everyone.” 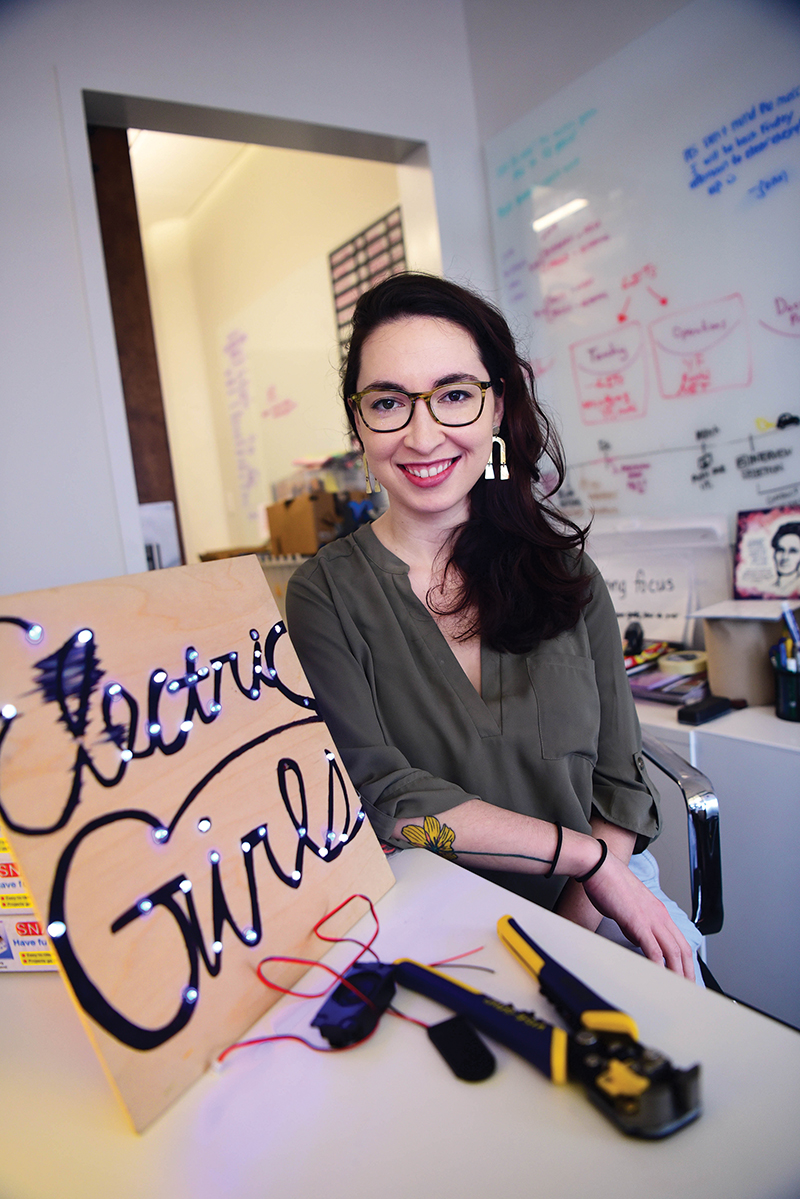 Co-founder Flor Serna started Electric Girls as a summer camp four years ago. The program is now in schools across New Orleans. 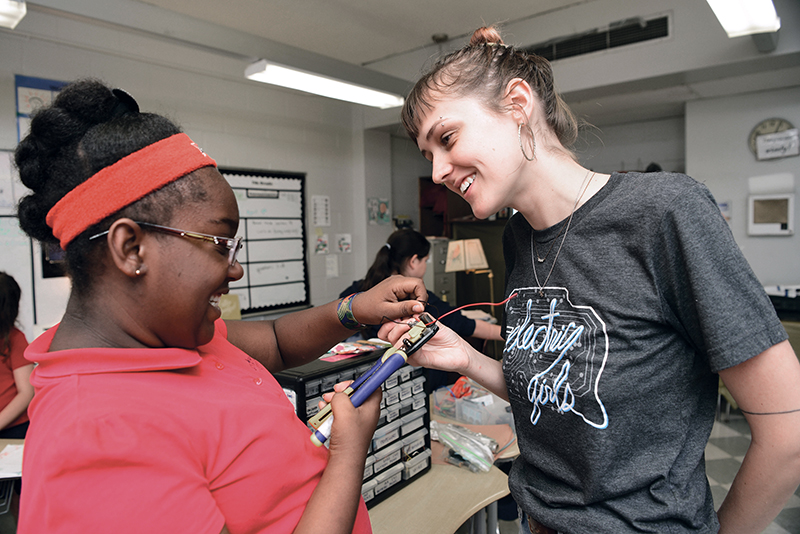 Help and Learn
Sip and Solder
Instead of a big signature fundraiser Electric Girls hosts small periodic events called, “Sip and Solder.” “We invite a small group of people to join us and we drink wine and they learn how to solder,” said Serna. “It connects them to what we do.”

A Good Match
FOR COMPANIES WHO…
Are involved in the STEM fields. Female STEM professionals are invited to volunteer with Electric Girls or just come and speak to the girls about their careers.

THE BASICS
SUCCESS OF SERVICES
After attending Electric Girl events:
3 out of 4 girls report liking science more
9 out of 10 feel confident enough to teach someone what they learned
100% feel better about their tech skills