It's time for business to unite our region around climate change.

In the business world, change is a must. Adaptation in business — just as it is in life — is crucial for survival. Business author Alan Deutschman popularized this concept through the familiar phrase, “Change or die.”

And yet, in the greater New Orleans region, our business community has yet to come together to address our changing climate, increased flooding and the global impact of our industries. We are able to discuss flooding and green infrastructure, and even coastal restoration, but for some, despite its direct and powerful influence on all of those issues, “climate change” is viewed as irrelevant and verging on the political.

We avoid the subject of the changing climate, and by doing so, we limit our own ability to change and adapt.

Climate change is founded in basic science (that 97 percent of global scientists confirm). Carbon emissions trap heat in our atmosphere, which makes our global climate warmer and contributes to increased storms. Think of a teakettle that is heating up; water boils.

In our oceans, for example, the increased heat generates powerful hurricanes. Natural disasters have doubled in the past few decades, and 90 percent of them are weather related. Change is here.

While the city of New Orleans recently unveiled a new Climate Action Strategy that includes goals to run on 100 percent low-carbon power by 2030, the federal government, through the Environmental Protection Agency (EPA), has recently announced a proposal to end the rulings of the Clean Power Plan which would require states like Louisiana to come up with an individual plan to shift toward clean, low-carbon power. As a state and region it appears that we are unwilling to talk openly about this issue, just as our federal government is denying the science.

But why, when we are so vulnerable to the impacts?

When several parishes are actively engaged in suing oil and gas companies for coastal damage exacerbated by climate change, how does this impact the industry’s ability to play a leading role in generating solutions?

It is primarily the large industries of our business community that have historically been known to prevent the spread of information to consumers and citizens in order to protect their own interests (and often at the expense of their direct customers).

We can learn from the tobacco industry’s fight to undermine evidence linking secondhand smoke to cardiovascular disease. After combing through nearly 50 million pages of previously secret, internal tobacco-industry documents, UC Davis and UC San Francisco researchers documented how the industry funded and used scientific studies to undermine evidence of health risks to the public.

In fact, Exxon mobile has already been found guilty of hiding knowledge about climate change over the past several decades. It doesn’t take much to realize that it’s in the best interest of the carbon-producing industries of Louisiana to undermine the existence of climate change.

Are short-term profits really more important than the long-term survival and legacy of an industry? This isn’t about defining our regional carbon-producing industries as “bad” or “unnecessary.” Quite the contrary, we need the jobs and income these industries provide for our livelihoods. But, while our economic prosperity depends upon these industries, they also threaten our survival. This is a truth that we as a region must face. And we must come together and adapt in order to get to a better place. We must change.

Business and industry can, should, and must be the leaders of the solutions needed in Louisiana, and I believe that the oil and gas industry could be the leaders of this transition. While we can point to corrupt, ill-intentioned motives of business leaders, we can also point to those business leaders who stepped up to do the right thing — who made an investment in an innovative solution that also earned a profit.

For example, Tesla is currently worth $160 billion through its innovative electric car and battery solutions (improving air quality and the environment, with business values exceeding Ford and GM).

In Kentucky, home to “coal country”, a new start-up is teaching coal miners to code. New energy efficiency contractors are training workers how to conduct energy assessments among a series of new workforce development programs.

Solutions exist, but we need the capital, the minds and the efficiency of our most important industries to be at the forefront of issues like climate change — even when it means that these industries themselves must make changes. Staples, General Mills, Nestlé, and roughly 30 other large corporations have stepped out in support of the EPA’s Clean Power Plan and are continuing to dedicate resources to adapt to and mitigate climate change.

Perhaps the issue isn’t self-interest of industry. Perhaps the greatest barrier to having an honest discussion around these vexing issues is the profound need for strong leadership. If Louisiana is going to remain the “Energy State” of our country, we need leaders with vision to see beyond the status quo to the extraordinary window of opportunity we have to secure our local economy’s long-term health. The time is now, and it is in our own self-interest to do so.

So where will you take us, business leaders of today? Will you seize this opportunity to bring us into a better future, one with cleaner air, cleaner water and fewer flooding events? Will we stand at the forefront of innovative change as a beacon of hope for our nation’s energy future? As a state and as a business community, let us be willing to step out as leaders on this challenging, yet promising, frontier. 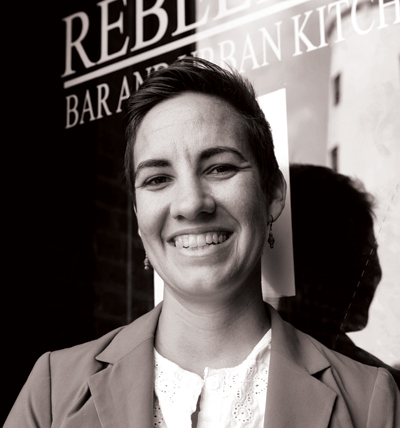 Liz Shephard is the CEO of LifeCity, LLC, a local consulting and software company that makes social and environmental impact profitable for business. If you and your organization are interested in maximizing profits through positive benefit to the community, contact her at Liz@mylifecity.com.

Categories: Environment, In Other News