CEO OF THE YEAR

Did You Know?
In 2020, NOLABA took home a record-setting eight awards from the International Economic Development Council, including Best in Show. 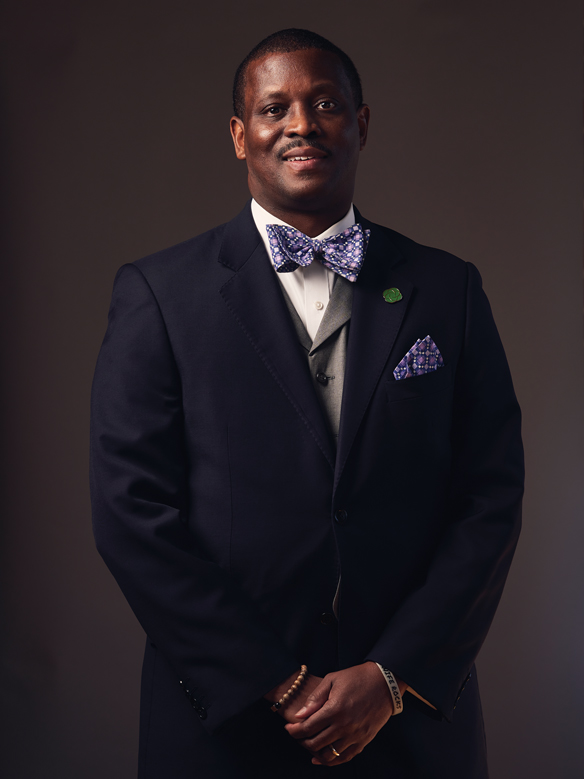 Since taking the helm of New Orleans Business Alliance (NOLABA) in June 2015, Quentin Messer has led the organization to not only support and bring new business to New Orleans, but ensure that any gains are shared and opportunities are available to all New Orleanians. A formidable challenge before this year, by COVID-19 has piled on its own challenges, but Messer and NOLABA took swift action rising to them from the very start.

NOLABA was the first local entity to set up a direct relief effort with the launch of its Gig Economy Relief Fund on March 16, which started with a $100,000 contribution from NOLABA. In the first 24 hours of accepting applications, almost 1,000 people applied for assistance. By the fall, the organization had raised $1.5 million for gig workers, small business owners, opportunity youth and hospitality workers.

In April, when it was clear small businesses would need help applying for federal funding, NOLABA was there to provide that too — while also offering up $150 to each business owner that received assistance and creating a bridge loan program to help small businesses as they awaited their money.

Recognizing the devastation happening in hospitality, NOLABA paired with Get Shift Done in mid-May to help out-of-work hospitality workers earn some money by filling shifts at community food banks and hunger relief organizations. The organization was also charged with administering the city’s Outdoor Dining Grand Program, and launched a website, Outdoordiningnola.com, to help answer questions and facilitate applications for assistance.

While operating with a staff reduced by 32% in 2020, the now 22-person-strong NOLABA has still continued with their regular work, which this year included securing $5 million from JP Morgan Chase to boost the growth of blue-green infrastructure in New Orleans, graduating the first InvestNOLA cohort – an executive education program NOLABA has created for high-growth entrepreneurs of color with revenues over $1 million —and reaching out into neighborhood business communities to create programs and initiatives that support local business.

For his work leading NOLABA to support the New Orleans economy in so many ways during an unprecedented year, we are proud to recognize Quentin Messer as Biz New Orleans Magazine’s 2020 CEO of the Year.

On What He’s Most Proud Of

I think, a lot of people would have been sidetracked, understandably, by all the uncertainty this year, but my colleagues have been able to say, “Okay. We get it. Yes, there is uncertainty, but we’re willing to keep moving forward.” I think that says a lot about them. I’m very proud to have the colleagues I have.

I believe in people taking risks, and rewarding people who take chances, even if, in hindsight, it may not have worked out. I think you have to reward and encourage initiative, or “playing with pace,” (I’m a big sports fan). You want to play with pace. It’s better to get to a decisive “no” than an indecisive “yes” because time is the only thing that you can’t give back to someone.

On his leadership pet peeve

I have no respect for people who pass the blame. If you’re a leader, take the blame. Even in an organization our size, it’s impossible for me to know everything, but if something goes awry, it’s on me. Because ultimately, it has to stop with me. I try to share all the credit but shoulder all the blame alone.

On his big pandemic leadership lesson

Back in March, April and May, when we were doing the Gig Economy Worker Relief Fund, that was a moment where we were threatened with severe staff burnout. We potentially could have lost some superstars because they had been running 80, 90 hours a week for two months. Fortunately, I have colleagues who said, “Hey, look. We’ve got to take everything off people’s plates for a couple of weeks, get through this and not bring on anything else, and then give people a break. I don’t care who calls, or what happens, Quentin, you’ll just have to figure it out. But the rest of the team just can’t do it.” I think you have to do that. The other thing that we did to prevent burnout on the team was provide one mental health day a quarter. It’s not something that can roll over. So, you have to take it.

On the importance of objectivity

My father taught me to be relentlessly objective. If you love something or someone, the best gift you can give them is a relentless objectivity. So, that’s what I try to give to myself, our team at the Business Alliance, the City of New Orleans, and hopefully the rest of the world.

On why he’s still unapologetically optimistic about New Orleans

There’s no other city that has endured as much as New Orleans has, arguably, in the U.S., and it’s still here… New Orleans has survived Katrina. It survived the flood of 1927. It survived the epidemic of 1918. It has survived battles in multiple wars, and it’s also survived its own missteps. But here it is. It’s still here. The other piece that gives me optimism is people want to be in New Orleans. It is so much in a position of strength to be some place where people want to be. You don’t have to pay people to come to New Orleans.

On what keeps him up at night

On New Orleans as an “underrated brain city”

The fact that our institutions of higher education are here, and the fact that they were open, and they’ve been able to maintain being open safely, that infused millions and millions of dollars in the local economy at a moment where there was no other industry up and going. Those institutions aren’t going anywhere. That gives me optimism, because that says that you always have a chance.

On the power of one simple thing

New Orleans is a place that people are fiercely loyal, but we’re very fiercely self-critical. Right? I get that. But I think you have to balance that with being grateful. When you’re grateful, that’s the key to unlocking more. Leaders who are grateful have colleagues — I would rather say colleagues than employees — who are willing to go the extra mile. I think when you try to be grateful in real time, then you unlock greater performance for yourself, for your colleagues, and for the clients and stakeholders that you serve.