Celebrating The Past and Building a Promising Future

With its rich history and traditions, St. John the Baptist Parish continues to be a cultural beacon and a multi-faceted economic engine powering South Louisiana.

It’s a bit of an understatement, but St. John the Baptist Parish has changed quite a bit over the years.

When originally settled by a group of Germans led by Karl D’Arensbourg in the 1720s, few roads existed. The majority of travel was conducted via boat, mainly on the still lakes and bayous of the area, though a few brave souls did dare to traverse the treacherous Mississippi River. Today, cars and trucks whiz through the Parish on the massive Interstate-10 runs, while Airline Highway serves as a key artery for the industrial and manufacturing empires dotting the Port of South Louisiana.

At the time of its founding, early residents relied on the fertile, above-sea-level land of the Parish for survival and also economic prosperity. While St. John the Baptist Parish still has some attachment to its farming legacy, the region today is a capitalistic cornucopia filled with multi-million-dollar factories, advanced medical centers and plentiful shopping and entertainment options, not to mention the largest tonnage port in North America.

Back in the day, settlers paddled their small boats into the big city, selling wares and surplus crops at the New Orleans French Market. Today, the action and excitement extends to the Parish, as the state-of-the-art soundstage at The St. John Center has attracted projects starring Hollywood royalty such as Oprah Winfrey, Mark Wahlberg and Denzel Washington.

But, for all that’s different nowadays, the foundation of St. John the Baptist Parish remains solid and unshakable three centuries later – namely, the spirit and pride of its people.
As the second permanent settlement in Louisiana, St. John was part of “La Cote des Allemands” (The German Coast), athough the area remained under French reign for its initial four decades of existence. Around the time (roughly the late 1760s) that the French transfered control of Louisiana to the Spanish, the Acadian exiles from Nova Scotia (forced to leave after the British victory in the Seven Years’ War) arrived in St. John Parish and established the first Cajun community in Wallace.

The top land grants awarded to settlers by their respective European governments (either French or Spanish) were located along either the east or west banks of the Mississippi River. Over time, those plots became the hub of a booming sugar cane industry, with its sprouting historic and architecturally stunning plantation houses – three of which still stand to this day. Whitney Plantation in Wallace cultivated into a museum chronicling the injustices of slavery in the United States in 2014. Two years earlier, it served as the backdrop for several scenes in the 2012 Quentin Tarantino movie, Django Unchained. Evergreen Plantation, constructed in 1790, operated until the 1930’s Stock Market Crash and Great Depression and was one of the most expansive operations throughout the South. Of the 37 buildings on the site, all but eight are antebellum. Evergreen is a National Historic Landmark. So too is San Francisco Plantation in Reserve – a “Steamboat Gothic” designed residence and one of the most architecturally unique homes in the country. All three plantations are arguably the biggest tourist attractions in the Parish, but that’s not all there is to see and do. 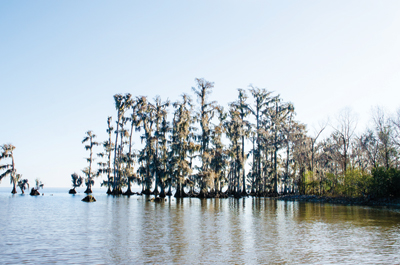 Every year on the third full weekend of October, Highway 51 Park in LaPlace floods with visitors and locals alike (most of them purposely hungry) for The Andouille Festival. For those whose taste buds are in the dark, Andouille is a spicy sausage originally made by German settlers in St. John during the winter months. The links are commonly found in gumbos and jambalaya dishes. The Festival – held in the “Andouille Capital of the World” – is jam-packed with food and craft vendors, a full schedule of bands, and events such as a pageant, fun run, car and motorcycle show, plus a second line parade.

Two months after the festival, the spectacle moves from the park to the banks of the Mississippi River to one of the most awe-inspiring sights found anywhere in this eclectic state. Lining both the east and west lips of the river, local builders construct massive, artistic wooden structures that take weeks to complete. On Dec. 24, all that hard work is eventually ignited in flames to light the way for Santa Claus on Christmas Eve. Those lucky enough to take in the scene from the sky witness bursts of orange and red, creating a makeshift runway for those traveling via sleigh that evening. St. John Parish continues to prove the magic it creates isn’t pigeonholed to just one evening.

Located in LaPlace, the St. John Center Soundstage is outfitted to cater to a wide variety of creative needs for filmmakers and TV producers shooting in “Hollywood South.” Equipped with catering, dressing rooms and green room facilities, along with 26,000 square feet of the soundstage, the St. John Center has evolved into the home base for major motion pictures and both network and cable television series.