NEW ORLEANS – On Monday, March 21, 2016, Capital One Bank announced it was donating $25,000 to the American Red Cross North Louisiana Chapter.

In response to severe weather that has caused severe flooding and tornadoes in Louisiana over the past few weeks, Capital One Bank has pledged a total of $50,000 to American Red Cross organizations in the state since March 1.

The funding will help those impacted by severe flooding that has occurred and may continue in North Louisiana. The Red Cross North Louisiana Chapter serves Shreveport, Monroe, Alexandria and other communities in the region.

Monday’s donation is in addition to a Capital One Bank $25,000 donation to aid victims of the flooding in Southeast Louisiana this month and the deadly tornadoes that struck St. James, St. John and Assumption parishes in February. Capital One branch associates in Assumption Parish filled trunks and trucks with canned food, bathroom, cleaning and kitchen supplies, water and more for those devastated by the tornado outbreak. Capital One also joined forces with Coca-Cola and donated 110 cases of water to the Assumption Parish Relief Center.

“During these difficult times, Capital One is committed to helping the American Red Cross deliver hope and help to those that have been impacted by the historic flooding and the tornadoes,” said Capital One Louisiana Market President Chris Haskew.

Capital One Financial Corporation is a financial holding company whose subsidiaries, which include Capital One, N.A., and Capital One Bank (USA), N.A., had $217.7 billion in deposits and $334.0 billion in total assets as of December 31, 2015. Headquartered in McLean, VA, Capital One offers a broad spectrum of financial products and services to consumers, small businesses and commercial clients through a variety of channels. Capital One, N.A. has branches located primarily in New York, New Jersey, Texas, Louisiana, Maryland, Virginia and the District of Columbia. A Fortune 500 company, Capital One trades on the New York Stock Exchange under the symbol “COF” and is included in the S&P 100 index. 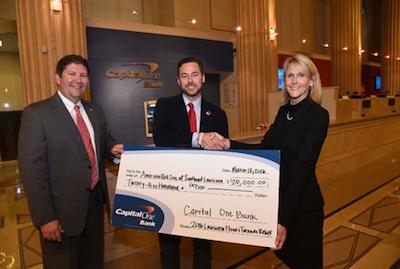 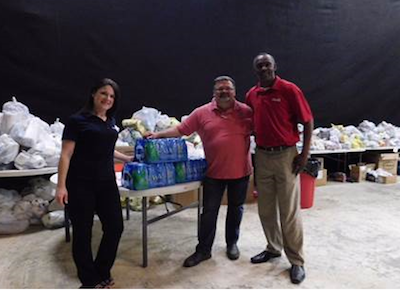