Valentine Day’s 1959 in Miss Doyle’s third grade class — I was excitedly opening my many Valentine Day’s cards when out of nowhere, Sal De Luca shyly placed a pastel pink conversation heart on my desk. It said, “Be Mine.” And I knew in that instant I would be his — forever. Alas, that did not come to pass.

However, Valentine’s Day still evokes memories of those schmaltzy conversation candy hearts to many of us boomers.

It all began in 1847, when pharmacist Oliver Chase invented a machine that rolled lozenge dough into perfect wafers. That invention soon morphed into America’s first candy making machine and Chase established the New England Confectionery Company (NECCO).  In 1866, his brother figured out a way to print words on the candy with vegetable dye and the iconic Valentine candy was born.

At one time, NECCO annually produced eight billion hearts and was the oldest continuously running candy company in America. However, in 2018, NECCO was bought by the Spangler Candy Co. in a bankruptcy court-ordered auction for $18.8 million. Rumors quickly spread that the new owners would no longer produce the wafer. A panic ensued as lovers of this nostalgic confection feared they’d never again enjoy the chalky, sweet treat.

Last year, this confectionary uproar got the entrepreneurial mind of local Cherie Melancon Franz churning. After brainstorming with her husband, she came up with the idea of creating a New-Orleans version of the romance-inducing candy with phrases such as  “Po-boy meets girl,” “Will you beignet mine,” “504 ever yours,” “I got roux, babe,” and “I will pinch your tail.” Her business, NOLA Talks Candy Hearts took flight.

In just a mere 20 days — she had an idea, started a company and became an instant success.

At the time, Franz had no experience in the candy business and very little experience in retail. But this year she’s much more prepared.

“I’ve learned how important it is to network,” she says. “So, I’ve teamed up with other businesses.”

“I’ve got my ducks in a row and all my stores are female-owned.”

Also, this time instead of gathering friends around her kitchen table, her candy will be packaged and sealed at a facility that meets all food safety standards and guidelines.

Franz, is also the founder and owner of Thinkerella, an after-school and special events business that teaches children about math and science.

This weekend she did a workshop with a few young scientists and along with a few experiments she also brought into the lesson plan her candy experience.

“We talked about innovation, 3-D printing technology and how printing words on candy is pretty cool,” she says.

NOLA Talks Candy Hearts will soon be launching a new product line, LSU conversation hearts with such phrases as, “I’ll never let you geaux,” “I love L. S. You’” and “U R MY GOAT”

“I want everyone, but my students in particular, to know that if you have an idea, you have to not only think fast, but act fast,” she says. “If you have an idea that you believe in you need to run with it and you can be really successful.” 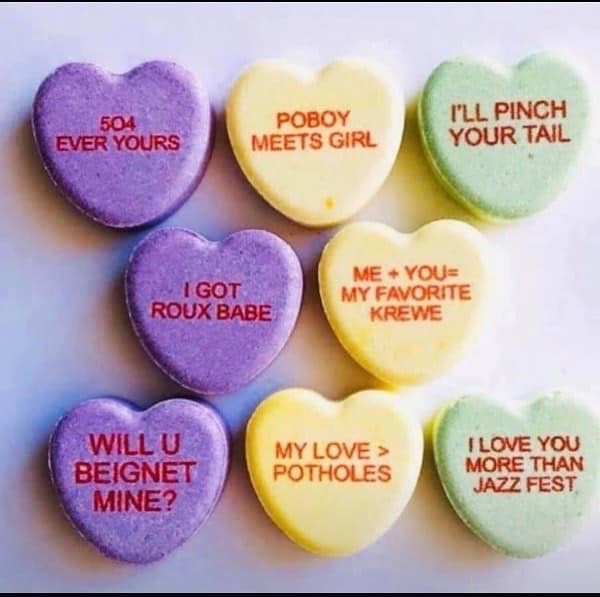