How the Greater New Orleans region helps those with creative interests transition into actionable and successful careers.

When you think of job opportunities in Greater New Orleans, you might think of booming sectors like tourism, hospitality and even technology—but when it comes to creative opportunities, the region is not typically seen as a hub where creative professionals can find success. Despite that common misconception, local creatives of all talents are fueling numerous regional industries and finding pathways to lucrative careers that lead far beyond Jackson Square.

For GNO, Inc. and other local economic development engines, the key is establishing opportunities that not only utilize creatives’ existing talents, but which also redefine the ways those skills can be used to advance any business within any industry.

“The history of New Orleans is rooted in creativity with our architecture, food, music and art,” says Grady Fitzpatrick, senior vice president of business development at GNO, Inc. “Creatives want to experience our culture, and we want to make sure it is not just for a visit. We want them to be able to put down roots, build a career and raise a family.”

Fitzpatrick says GNO, Inc. frequently receives inquiries about opportunities in the region from creatives who aren’t aware of the multiple professional avenues available to them. He says this has led to a more orchestrated effort to publicize the region’s success stories and to build an economic identity around creative opportunities. With this goal in mind, GNO, Inc. also works closely with the region’s higher education institutions and nonprofit training providers to align their creative curriculum to the needs of local companies. 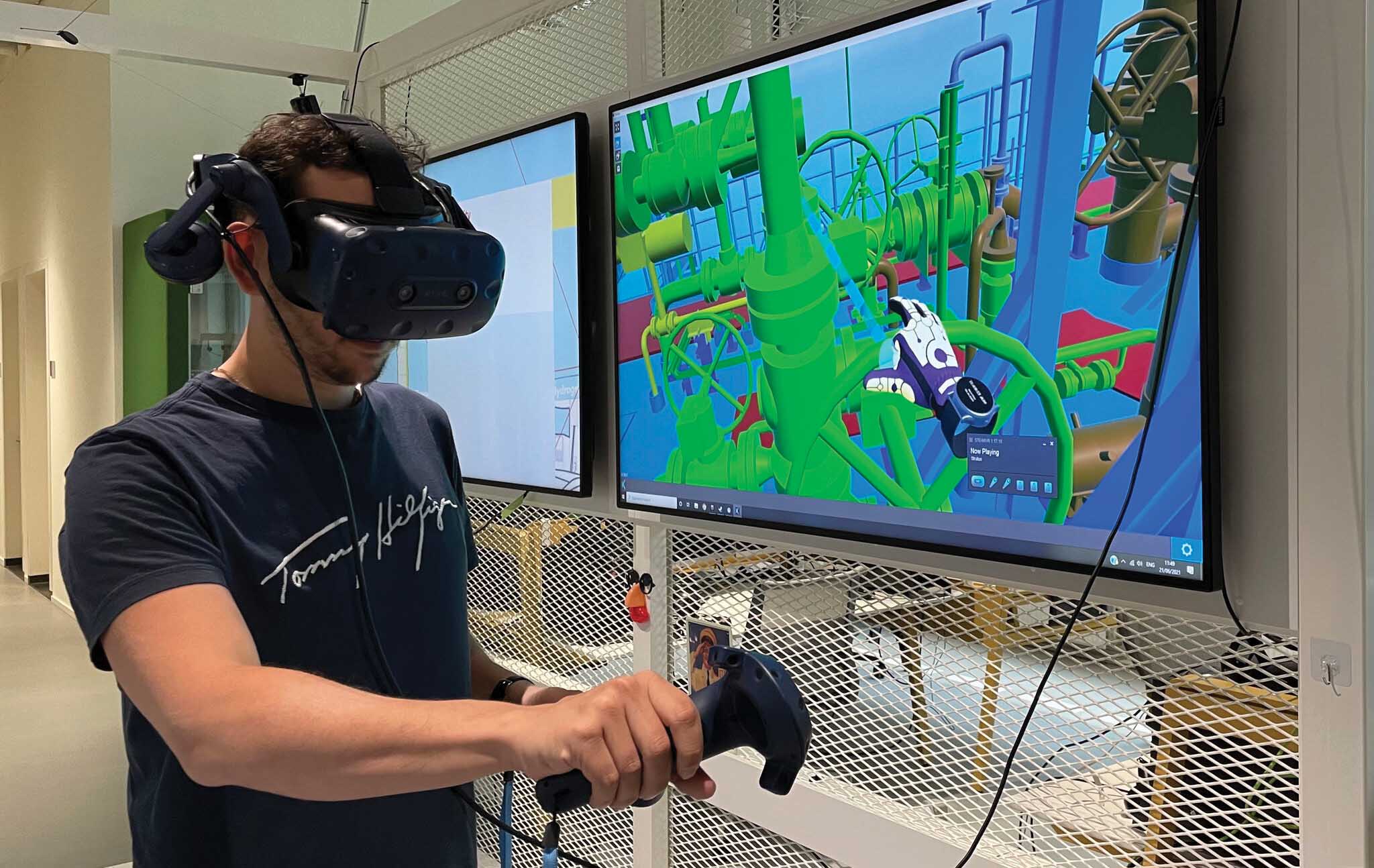 “These talent pipelines then feed our companies and allow us to market ourselves as a creative hub where we have a strong talent base and growing companies,” Fitzpatrick says. “Companies and talent want to cluster together and be around like-minded companies. Creativity is one of our strengths, so we use that as part of the marketing pitch to outside companies to expand into our market.”

“Diversification becomes essential in a thriving economy,” Fitzpatrick says. “We witnessed this first-hand during COVID-19, when our hospitality sector completely shut down and oil prices dropped. This was a double blow that made it a more difficult recovery. On the flip side, we saw the video game sector explode due to the increase in demand for home entertainment. Louisiana and Greater New Orleans is positioned as one of the most cost-effective locations for entertainment and creative industries. There are tax incentives that allow a business to lower operating costs and focus on growth.”

As the need for creative content grows—including entertainment software, film, television and printed media—so too does the demand for professionals who are equipped to produce that content. GNO, Inc. is especially focused on growing the video game industry, as it touches many parts of the creative process from art and design to storytelling and software development.

“Gaming is also one of the fastest growing industries in the world and should grow to be worth more than $250 billion by 2025,” Fitzpatrick says. “We have also focused on animation and visual effects. We have some great companies in this space, and we continue to look to attract more of them. The film shoots can be transient, but animation and visual effects are more permanent types of jobs that don’t need to be on location.”

One such creative company based in New Orleans is inXile Entertainment. Producer Jeff Pellegrin, who is originally from Houma, earned a master’s of business administration degree from the University of New Orleans, moved away for work and then returned in 2016 to work for inXile.

“I was working at Electronic Arts Quality Assurance in Baton Rouge, and I had been looking for a production job for a game studio that has a great reputation for finishing products,” Pellegrin says. “I heard a rumor inXile was coming to New Orleans, and I immediately sought out an opportunity. There weren’t many game development opportunities for producers, and I was fortunate that inXile had a window for one.”

The company, which produces Xbox games such as “Wasteland 3” (which currently has 2 million players), is known for creating top-notch player experiences. The company received assistance from several local offices to make its operations successful, including GNO, Inc., Louisiana Economic Development and the New Orleans Business Alliance.

“We have hired several folks who attended those programs, and we have some employees who assist and teach those programs,” Pellegrin says. “However, we get candidates who want to live in New Orleans for the quality of life that it provides. Having creative industries in New Orleans adds to the culture of the city and also brings new job opportunities and a diverse workforce that will greatly benefit the Greater New Orleans region.”

For Pellegrin, the move back to New Orleans to work in the creative sector has proven to be the right choice.

“Since I have been with inXile, I was able to marry, buy a house and have two children, and be part of the growing digital media community in the Greater New Orleans region,” he says. “I used to live on the West Coast pursuing my career, and I wouldn’t imagine doing those life milestones while there.”

Yet another creative company that has made its home in New Orleans is Kinemagic—a fully immersive virtual reality solution for the heavy industrial industry. The company’s software, dubbed Stratus, allows clients to remove design flaws before construction begins.

“Stratus allows customers to root out those ‘gotchas’ before big dollars are spent in construction,” says Kinemagic’s Founder and CEO, Brian Lozes. “It’s much cheaper to fix a drawing than it is to rip out steel and concrete to install version 2.0.”

Lozes, who is originally from River Ridge, started the company in 2017 after working for heavy industrial companies and seeing firsthand the extra money needed to correct design problems during the construction process. He says the reason for the problem mostly relates to a stakeholder’s inability to see a facility at life-sized proportions before it’s built—something a little creative legwork upfront can help to avoid.

“We’ve solved that problem with Stratus, which gives our customers the superpower of seeing, walking, collaborating on and testing their future and existing facilities at human proportions using immersive VR technology from anywhere, anytime without travel,” he says. “This capability helps heavy industrial operators eliminate those future cost overruns. And, it offers additional benefits like reduced travel-related carbon emissions and enhanced training capacity. The entire process, which used to take months to develop for one facility, is fully automated and available within minutes. With just a few clicks, our users can meet on their facility with stakeholders from across the globe to make those critical decisions.”

Lozes says that his team has incredible creative professionals who are building software that solves these problems, sometimes by drawing on principles gleaned from unexpected arenas.

“They work together to invent solutions, flexing their strength in communal knowledge and problem-solving,” he says. “It starts with having a culture that encourages discussion around fresh ideas. Our software is heavily influenced by gaming, so it’s pretty often that we see some technique or concept that is done well in gaming that would also translate into our software. The other side of the equation is leaving room to be nimble in the development roadmap.”

Lozes chose to start Kinemagic in New Orleans because of its robust local workforce and access to heavy industrial facilities along the river.

“We definitely have a ‘seeing firsthand is believing’ sort of technology, so proximity was key to our start,” he says. “Also, I’ve always thought the New Orleans workforce was particularly special. We take a lot of pride in our work. We take commitment to a vision and company seriously. Other cities have reputations for rapid job hopping for incremental gain. Our workforce leans in and deeply vets a company for long-term opportunity over short-term gain. You can build an amazing culture around that.”

Lozes also has hired a number of graduates from the University of New Orleans’ gaming program. In fact, his first-ever hire came straight out of the program.

“They develop incredible local talent,” he says. “We hope these programs continue to expand to meet the demand from the growing startup scene here.”

Another part of Kinemagic’s success, according to Lozes, has been its participation with locally based Idea Village—a nonprofit organization that supports regional startups.

“It connected us with people who have been successful in similar arenas to help us see our blind spots and prepare for scale,” he says. “When you’re looking to scale, funding also comes into question. Idea Village connected us to key funding opportunities as well. This combination multiplies our growth opportunity. I think it’s important for the Greater New Orleans area to secure its future by luring in creative industries, thinkers and funding groups to build a sustainable economy.”

In 2021, this Shreveport-based institute announced its expansion into the Greater New Orleans area. Students at University of New Orleans, Nunez Community College and Northwestern State University will have unprecedented access to DMII’s one-year Animation, Visual Effects And Interactive Content program via online learning, setting them up for careers in film, television, video games and more.

The Innovation Hub, or iHub, at Southeastern Louisiana University was opened in 2021 in partnership with Louisiana Economic Development. The hub is described as a space for multidisciplinary students to convene and collaborate, and it is outfitted with technology that University President Dr. John L. Crain says can be interchanged according to the needs of a specific student or group.

This local nonprofit introduces youth of all interests and skill sets to the mechanics of software development, effectively creating pathways to prosperity for low-opportunity individuals. Additional programs are focused on training the adult workforce in JavaScript and web development and teaching high school students the core concepts of computer programming.

The School of Professional Advancement, also known as SoPA, offers specifically tailored courses for working adults to build on their education. Among the school’s creative offerings are a Bachelor’s in Digital Design and Post-Baccalaureate Certificates in Graphic and Interactive Design.

Students of the Game Development concentration at UNO are trained in core concepts including graphics, physics, game design, artificial intelligence and audio. They also have the opportunity to participate in research with the university’s Narrative Intelligence Lab. In March 2022, UNO will host its second Xbox Game Studios Game Camp.