NEW ORLEANS — Greater New Orleans Inc., the regional economic development nonprofit organization, and more than 10 southeast Louisiana parish presidents are working together to lobby the federal government to make changes to the National Flood Insurance Program’s new Risk Rating 2.0 pricing methodology, which they say will cause rates to rise (in some cases, steeply) for nearly 90% of Louisiana homeowners.

Representatives of the group, which GNO Inc. President and CEO Michael Hecht has jokingly dubbed the “Cajun Avengers,” will fly to Washington, D.C. in early June to make their case.

Hecht said there are two major problems with the new system: it’s not transparent enough and it’s too expensive.

“This is similar to what we saw 10 years ago in that it’s legislation that’s meant to reform flood insurance but it is going to end up having unintended consequences for people who have paid their taxes, maintained their insurance and done nothing wrong,” he said. “And similar to 10 years ago, you have FEMA kind of going down a path in an obstinate way, seemingly uninterested or unable to change course.”

In 2012, Congress passed the Biggert-Waters Flood Insurance Reform Act, which made changes to flood insurance, flood hazard mapping, grants and the management of floodplains. GNO Inc. and its Coalition for Sustainable Flood Insurance were vocal advocates for southeast Louisiana and other coastal communities during the creation of the bill. A decade later, the federal government — FEMA, specifically — has introduced the biggest change to the way it calculates flood insurance premiums since the National Flood Insurance Program’s 1968 debut.

Defenders of the new Risk Rating 2.0 system, which was fully implemented on April 1, say it uses technology and a more holistic approach to create more accurate and equitable assessments of risk, and it has mechanisms in place that limit the amount a policy can increase year-to-year. But Hecht said FEMA refuses to share the algorithms or calculations it uses to determine new rates, “which means that we don’t know if it’s accurate” and homeowners aren’t able to see how their rate was determined so they can make changes that will lower it. 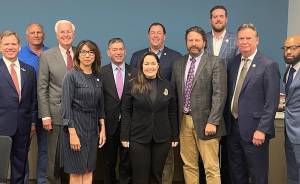 And then there’s the affordability issue. Hecht said he’s talked to people whose annual flood insurance rates were originally $500 or $600 and have gone up to $2,500 or $3,500 or more. Experts cited in other reports say the increases for some policyholders will be more extreme.

Hecht said that will lead to three outcomes.

“There are going to be some people who pay it because they just don’t think about it and they can afford it,” he said. “Then there are going to be people who say, ‘You know what, I’m in an X zone. I’ve never flooded. At $500, I’ll sign the check but not at $2,500. I’ll use the money for something I need.’ And then there are people who are on fixed income — the elderly or the working poor — for whom $2,000 more a year is not possible. They might not be able to afford their homes.”

The good news, said Hecht, is that there are ways to fix the problems — and that’s the message the “Cajun Avengers” will take to the halls of D.C. in a few weeks.

“There are solutions for both problems,” he said. “For transparency, it’s pretty obvious: open up the box. For affordability, there are a few things you can do. You can lower the annual increase limit from 18% to 9% so it goes slower. You can put some means testing on so that people who have lower incomes pay less. And you can cap the total cost of a policy relative to the coverage. In my mind, it should never exceed more than 1%. So if you have a $250,000 coverage package, which is the maximum, you shouldn’t pay more than $2,500. These kind of things would make this more digestible.”

Hecht said that the crisis lit a fire under southeast Louisiana leaders and allies around the country who share their concerns.

“We’ve reconstituted our Coalition for Sustainable Flooding, which includes 150 different organizations in more than 35 states,” he said. “We’re beginning to have regular phone calls, we’re developing a white paper analyzing affordability. And then we’re gonna be doing the ‘fly-in’ to D.C.”

“My message is that we should be concerned,” he said, “However, we won 10 years ago, and I think we’re gonna win again this time. And under no circumstances should people drop their insurance. Because when you drop your insurance, you lose the grandfather protection. And then if you have to pick it up again, it’ll be at the full rate, not at the gradually increasing rate.”