Entrescan and Scale Workspace are housed in the former Ives Printing Company building at 612 Andrew Higgins Dr. in what is now known as the Taylor Education Center.

New Orleans is home to several coworking spaces, but until recent months, there wasn’t one geared specifically toward the maker community.

That all changed in November of 2018, when a partnership between Phyllis M. Taylor, chairman and president of the Patrick F. Taylor Foundation, and 3-D design-services company Entrescan created that and more inside the former home of the Ives Printing Company at 612 Andrew Higgins Dr. The four-story brick building was transformed by Woodward Design + Build into what is now the Taylor Education Center — home to Taylor’s “The New Curiosity Shop” maker space, Entrescan’s headquarters and Scale Workspace, a coworking space for product developers, engineers, designers and artists.

“We’ve consistently been a bridge between education and industry,” says Trey Richoux, president of Entrescan. “Our market is a relatively new one, and as a result, we have worked more closely with our education partners than most businesses. They were our earliest clients and trusted partners. We’ve helped numerous schools equip and build out their maker space. It was in the same vein that Mrs. Taylor asked us to consult with them on building a maker space in the Taylor Education Center.”

Richoux says Scale Workspace and The New Curiosity Shop are the result of those conversations and meetings. In addition to either a seat, desk or office membership — along with the usual co-working space amenities, such as fast internet, coffee, shared lounges, conference rooms, and networking and collaboration opportunities — members of Scale Workspace enjoy access to workshops and fabrication equipment at The New Curiosity Shop. Equipment training and certification is also made available to members.

Richoux says Entrescan worked with KV Workspace on the interior design and furnishing of Scale Workspace. Modern-style chairs, sofas, wall units and other furnishings by Haworth are interspersed with worktables designed and fabricated at The New Curiosity Shop. A wealth of windows allows considerable natural light into all of the spaces and the interior is made even brighter by white walls.
Richoux describes the core audience for both Entrescan and Scale Workspace as being similar in that they are both businesses that build products.

“That audience is pretty wide and encompasses everything from mechanical engineering firms, to product development companies, to artists, jewelers and everything in-between,” Richoux says. “The distinction between an Entrescan client and a Scale Workspace tenant is really determined by the value of the office space and direct access to the fabrication equipment.”

Richoux cites tenant HapTech, which designs using haptic technology — technology that creates an experience of touch by applying forces, vibrations, or motions to the user — to create training weapons designed for the military.

“HapTech brought the M4 [carbine] rifle to market 40 percent quicker at Scale Workspace than they would have been able to prior to moving in,” says Richoux, who notes this as an example of howdirect access to equipment has improved both the company’s product development cycles and speed to market.

Entrescan’s offices and 3-D print shop are located on the ground floor with The New Curiosity Shop, which includes a room with industrial sewing machines, CAD workspaces and a large pattern table for textile designers, an assembly area with compressed air power drops and worktables, and a woodshop.

On the second floor, Scale Workspace, houses open workspaces and private offices, three conference rooms, a kitchen and breakroom, along with indoor and outdoor lounge areas.

“Scale Workspace is more or less a pilot to see if enough of an audience exists here — or a test to see if we can cultivate that audience — to support our development and offerings in a sustainable way,” Richoux says of the company’s greatest challenge. “We are working hard on awareness so that we can reach our audience. This kind of community exists in other cities and we are working to establish it here. We want to answer the question, ‘Why not in New Orleans?’”

In the coming year, Richoux says the company’s goal is “to support and encourage the physical production of innovative products, designs and art here in New Orleans,” and to become a hub for people and businesses in those realms.

“Scale Workspace shines a light on this type of fabrication work and pushes our community to take their ideas beyond just concepts and bring them into production right here in New Orleans,” Richoux says. “We’ve built Scale to take part in shaping the future of our city and brighten the economic outlook for the people who live here.” 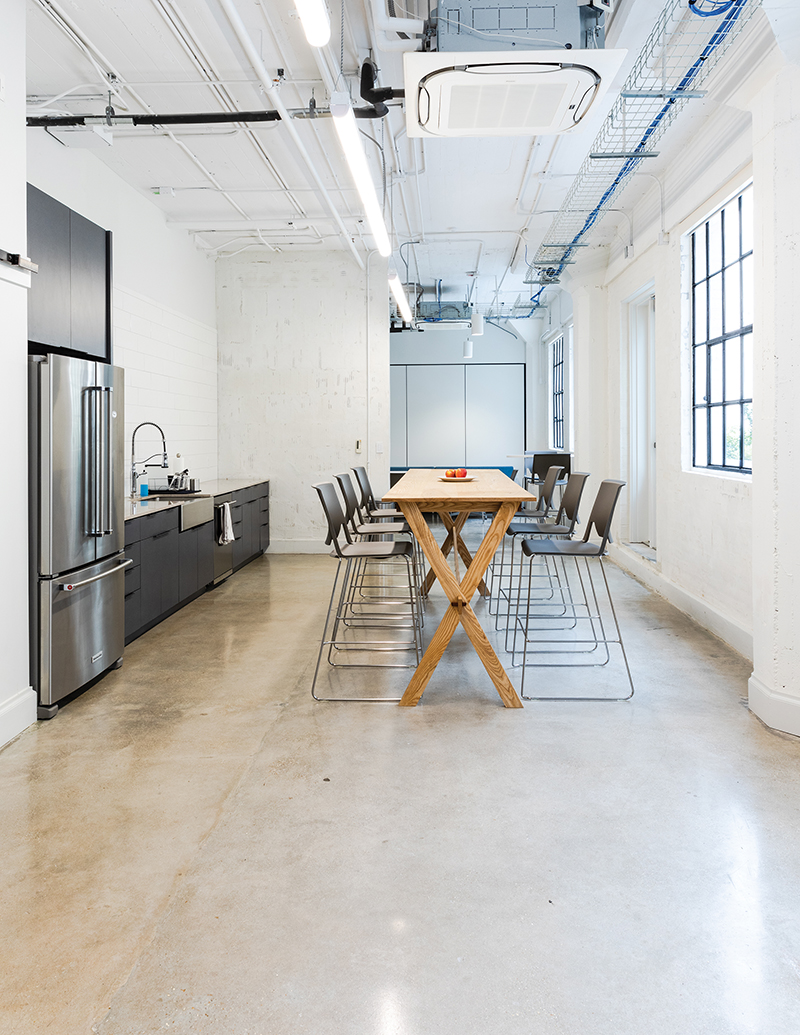 The kitchen at Scale Workspace leads to a sunny patio. Most furnishings in the space are by Haworth, but worktables and the kitchen table were designed and fabricated at The New Curiosity Shop. 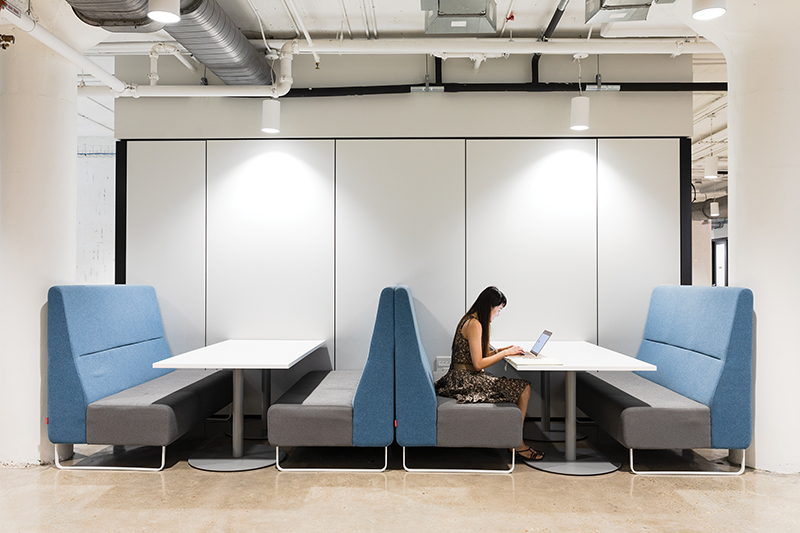