Business Interrupted, But Not Insured

What role should insurance play in the COVID-19 pandemic? Where do we go from here? Local insurance professionals weigh in. 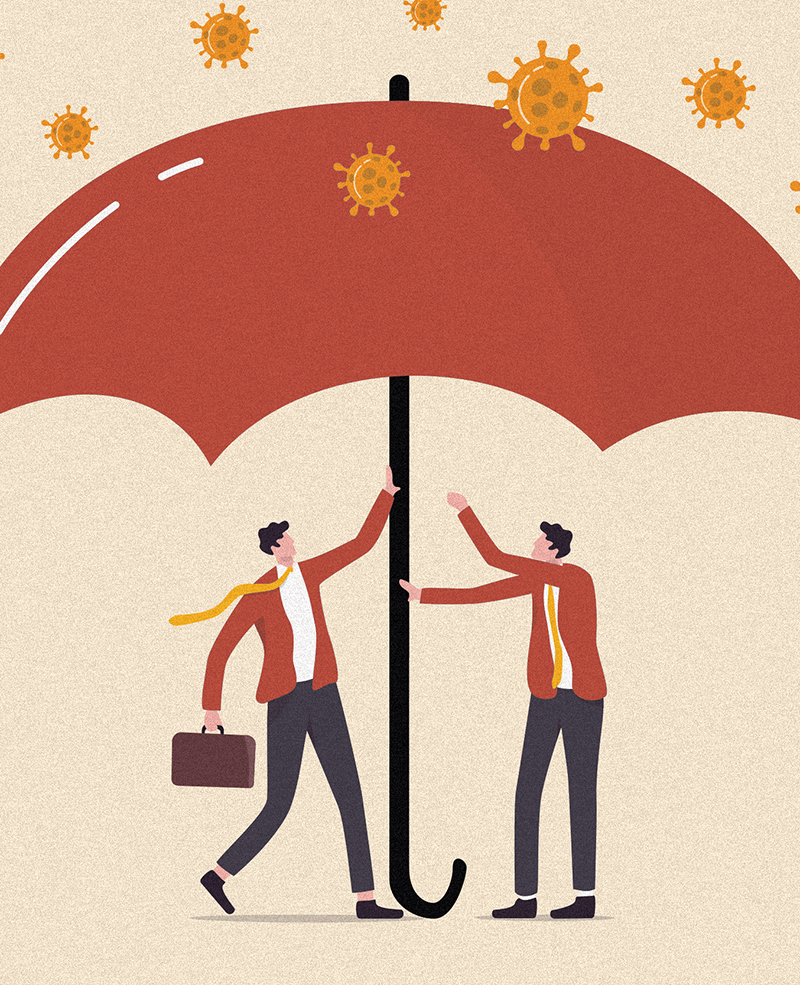 THERE’S NO DOUBT THAT MANY BUSINESSES have been interrupted due to COVID-19, but should businesses be entitled to collect on business interruption insurance? The insurance industry is saying no.

One of the biggest reasons cited by insurance companies is that standard business interruption insurance used in property
policies is typically limited to physical property damage from something like a natural disaster.

“Most business interruption insurance is triggered by property damage and has a 72-hour waiting period time deductible,”
said Blake J. Martinez, shareholder, commercial insurance and surety bonds at Ross and Yerger. “With COVID-19 not directly damaging property — and if it did, it theoretically could be sanitized or cleaned within the 72 hours — the majority of insurance companies have not been paying business interruption claims.”

If they were forced to pay out on claims, companies argue the results could be financially devastating for the property and casualty insurance industry.

“We were already in the midst of a hard market for the last year with premiums increasing since mid-2019,” said Martinez.

“If the government were to mandate these claims be paid, you would likely see some type of government/taxpayer support as this would test the solvency of many insurers,” he said, adding that the impact on future premiums “would be substantial.”

Is there insurance small businesses could have purchased specifically for something like a global pandemic? Martinez said the answer is probably not, at least not very easily.

“Insurance that will cover the perils of pandemics, virus, government action, etc., is typically acquired in a standalone enterprise actual net loss policy,” he said. “Unfortunately, this type of product is not readily available for small businesses as the standard insurance markets are typically subject to large minimum premiums and captive programs require large upfront capital costs.”

One exception, however, are those in the business of big events.

“For businesses that make a large portion of their income from a couple of events, a standalone event insurance is a very good risk management tool and it is key to make sure that pandemics are a covered cause of loss,” Martinez said. “Wimbledon, for example, has purchased pandemic insurance for the past 17 years at $2 million per year, and is set to receive a $141 million payout from this year’s cancellation.”

In an effort to assist companies who were in the process of going through renewals or were having difficulties making premium payments, the Louisiana Department of Insurance issued an emergency order suspending all policy cancellations from March 12 to May 12.

As of the beginning of May, there was speculation that the United States government might step in and establish an insurance program similar to the Terrorism Risk Insurance Act, which was created following the estimated $40 billion in insurance losses — and consequently, the massive market withdrawal from reinsurers — that followed the attacks of September 11, 2001.

Signed into law on Nov. 26, 2002 as a government reinsurance backstop, according to the U.S. Department of the Treasury, the Terrorism Risk Insurance Act (TRIA) “created a temporary federal program that provides for a transparent system of shared public and private compensation for certain insured losses resulting from a certified act of terrorism. The Secretary of the Treasury administers the program with the assistance of the Federal Insurance Office.”

The act has since been amended and reauthorized multiple times, with the latest being on December 20, 2019, when the Terrorism Risk Insurance Program was extended through December 31, 2027.

“It’s the usual response when something isn’t available from private insurers, but it’s hard to say what it would look like,” said Ryan Daul, producer at Daul Insurance Agency. “Most policyholders have business income forms as part of their property policy — that is the most common way business income is written. If it is available in the future, business
owners may want to look for a different type of business interruption insurance that is not specifically tied to a property loss.”

Another policy that is predicted to become a popular topic in the next few months is communicable disease liability.

“Any business that is open to the public has a risk of being the source of an outbreak,” said Martinez, “and if it can be proved that they were not following state, federal or CDC guidelines, those businesses are subject to liability.”

As we all struggle through this pandemic, it’s important for business owners to take a good look at the areas in which they may have risk and try and mitigate against those risks.

“Alternative risk financing through captives and other risks not directly tied to insurance are very important, and agents are on the front lines finding and developing best practice risk management procedures to help clients limit liability,” Martinez said.

The current pandemic has proven that not all risks can be accounted for; however, it’s important for businesses to stay in contact with a broker, who will be apprised of changes in the insurance industry as they are made.

“The best advice I can give is stay ready for change, that means even adjusting your insurance policies for the ways that your business will change,” said Kristin Swanson, vice president of operations at Swanson Insurance Agency. “No one could have anticipated this happening, not even the insurance companies, whose job it is to account for risk. We have had to adjust our business model and for how insurance will be sold post-COVID-19 and on.”