It was on an Ash Wednesday several years ago that award-winning author, photographer and publisher Deborah Burst took photos at St. Roch Cemetery in New Orleans.

“There’s a room in the chapel that I call ‘The Chamber of Miracles,’” she said of the sanctuary that’s filled with prosthetics and crutches of those who asked St. Roch for help with their diseases or deformities. “And when you walk into it, that’s what you feel: sorrow, happiness and miracles. It’s full of people, and you can see their disabilities and feel their adversities, and see what they’ve conquered. It’s a feeling of triumph.”

Burst was also captivated by the clouds.

“New Orleans weather changes so quickly,” she said. “It was a cloudy day with sunlight peeking through. When the sunlight hit the tombs it was like the spirits had a spotlight on them. The drama of the clouds and the drama of the movement of the light were giving life to the cemetery.”

The spectral effect was so compelling, a photo taken that day of the cemetery landed on the cover of her 2nd book that she released from her own publishing company, appropriately called Cloud Burst Publishing.

Burst will be selling and signing her book, “Louisiana’s Sacred Places: Churches, Cemeteries and Voodoo,” on Thursday, October 29, 2015, at St. Alphonsus Church, 2025 Constance St., during “An Evening with the Angels & Saints of St. Alphonsus Church,” featuring a Q&A with famed Gothic fiction author Anne Rice.

On Halloween, Saturday, October 31, Burst will speak about “Louisiana’s Sacred Places” at the Louisiana Book Festival in Baton Rouge and hold a book signing afterwards.

Burst started her freelance writing and photography business after an IBM downsizing layoff in the 1990s. The New Orleans native, who now lives in Mandeville, returned to Tulane University and graduated in 2003, at the age of 49, with a BFA in Media Arts. After publishing more than a 1,000 articles and twice as many photographs, she signed a publishing contract with History Press at the age of 59. It was then she published her first book, “Hallowed Halls of Greater New Orleans,” which includes a foreword by Anne Rice and features 10 years of historic church research and photographs from New Orleans to the Northshore.

When she launched Cloud Burst Publishing a year later, Burst released “Louisiana's Sacred Places,” which presents a captivating journey of history and mystery combining her love for art and architecture into a poetic trail of churches, cemeteries and Voodoo ceremonies with more than 50 color photos. “Louisiana's Sacred Places,” is 152-pages long and is an eccentric collage of cultures and customs that also illuminates the country chapels and graveyards along the back roads of St. Tammany, Pointe Coupee and the Feliciana Parishes.

Her third book, also published through Cloud Burst, will be released mid-November and is called “Southern Fried and Sanctified: Tales from the Back Deck.” In it, Burst showcases some of her most prolific work and talents of southern storytelling and photography. In the book’s 5 chapters she shares stories about some of her fondest travels through New Orleans and the Gulf Coast states, a rolling picture show of Georgia and South Carolina and the mountainsides of Arkansas, Tennessee, Kentucky and Virginia. 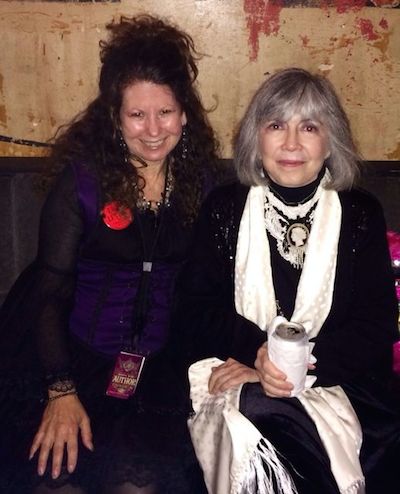 “New Orleans is full of spirits,” Burst said. “You can walk into an empty church or a cemetery and you can feel them, and if you’re there long enough, they’ll tell you a story. When I’m taking photos, that’s what I feel and what I hear.”

As an independent publisher, Burst said she doesn’t have an official staff, but has the essential components to any self-publishing endeavor – a graphic designer, a sales printer rep and an editor.

Burst only publishes her own non-fiction work, and said the more you print, the more economical the price point. Burst said you can expect to pay anywhere from $3 to $6 for a published product, with full color photographs under 200 pages long. Burst said she prints 1,000 books at a time.

When Burst met author Rice in 2008, she interviewed her about Rice’s memoir, “Called Out of Darkness: A Spiritual Confession,” for Southern Breeze magazine. When Burst told Rice she wanted to write a book about New Orleans churches, Rice told her, “If you do, let me know.” Burst wrote the book, let Rice know, and Rice granted another interview and contributed the Forward to “Hallowed Halls of Greater New Orleans.”

About Burst’s “Louisiana’s Sacred Places,” Rice wrote “Delightfully vivid bringing to life all the favorite haunts of the lively spirits both living and dead.”

“Anne Rice is a matriarch to authors around the world,” Burst said. “She has more than a million Facebook followers, and she’s always offering writing tips and support to authors.”

One of the biggest tips Burst likes to share with fellow authors is that you don’t need traditional publishers anymore to get your book out there.

“Royalties on traditional publishing are nominal at best,” Burst said. “A $20 print book would yield between $1 to $3 at most, and of course eBooks even less because of their price point. Although most publishers promise a healthy round of marketing, they often fall short. Most require writers to fill out a lengthy marketing questionnaire including detailed contact lists, names of local bookstores, gift shops, museums or any place that sells books. The traditional publisher focuses on the initial release, that surge of sales for the first month, and they then move on to their next book release.”

“Self publishers have much higher royalties as they have incurred the majority of the work minus the expense of editors, graphic designers and print costs,” she said. “You also have the option of what’s called print on demand which means the book is only printed when it is ordered, therefore it costs you nothing to print. A popular print on demand service is Amazon’s CreateSpace.com, which offers a royalty calculator. That is the amount of money you make on each book sold. You also have the option to buy some of your own books and sell at book signings or marketing events. There’s a calculator for that as well.”

“The self publisher is basically the writer, the publisher, the publicist, the marketer, the social media guru and office clerk,” Burst said. “More established self-published authors hire virtual assistants who can take care of sending email blasts putting together newsletters and general online formatting with various marketing sites.”

And if you want to sell your book? The best way is to speak about it, Burst said.

“I attend speaking events to sell,” she said. “I enjoy public speaking, and my enthusiasm and passion for my book come through in the presentation. If you can speak about your book, then you can sell your own book. It’s been my experience that when I speak in front of a group, 40-50% of the audience buys it.”

Even resident Voodoo Priestess Sallie Anne Glassman is a believer. She wrote, “I personally believe we bury our dead aboveground because it’s easier for them to get out at night and walk around the city. In her book [“Louisiana’s Sacred Places”], Deborah has captured the true essence of the Voodoo religion, and the souls of New Orleans both living and dead.”

After the November 2015 release of her third book “Southern Fried and Sanctified,” Burst will publish the second in the series of “Louisiana’s Sacred Places” that will feature more historic churches and cemeteries in New Orleans, portions of St. Tammany, and southern regions of the state including Houma, Terrebonne, Raceland and Morgan City, just in time for Halloween, in October 2016.