Bryan Francher is a man who loves hats. Watch him as he exits his historic house on Coliseum Square that overlooks the fountain in the park wearing his favorite boater hat and you may think you are back in time.

“Men wore handsome double-breasted suits along with their boater hats back then,’ he says “I am sure I would have been right in style."

President and co-partner of the Francher-Perrin Group, a boutique real estate firm that works with Gardner Realtors, Francher has thoughtfully been collecting his beloved boater and bowler hats since the 1990s.

"In the winter my brown, wool bowler is my favorite," he continues. "I like it so much that it has a place of honor on the coffee table all year round." Then he smiles and adds, "Each of my hats comes with a story of when and where it was purchased and, as you may imagine, some of my favorites were purchased when I have been on vacation with Dan, such as the black, wool bowler I purchased on our trip to Prague in December 2013. The weather was so cold that I put it right on and wore it out of the shop.”

Dan Brockhoeft, long time sales manager of the Omni Royal Orleans Hotel in the French Quarter, is well aware of Bryan's love of hats. "He doesn't feel that he is well dressed without a hat," Brockhoeft says. Partners for 23 years, the couple makes an impressive entrance since both are over 6-feet tall and always well dressed. 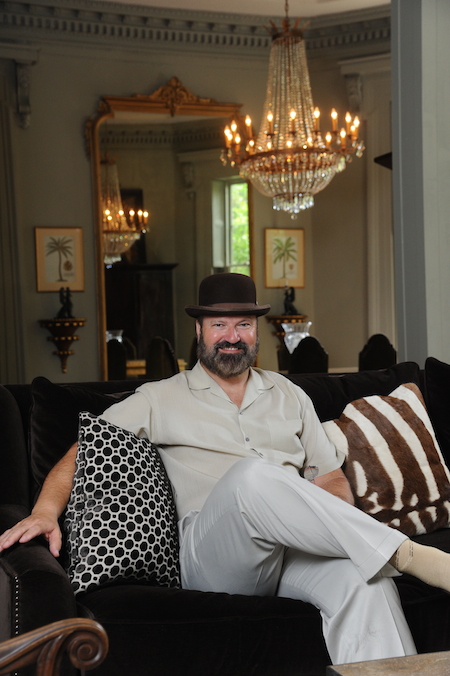 Francher is a big fan of the late, iconic actor Cary Grant.

"I love his old movies where he is elegant in a double-breasted suit," he says. "And don't forget his exquisite soft leather, spectator shoes." Yes, it is easy to imagine Grant showing up for an elegant Francher-Brockhoeft party at their mansion that rivals the setting of the house in "The Philadelphia Story," the grand house used to film the Grant-Katherine Hepburn movie, and it doesn't take a leap of faith to think of Grant wearing a boater or bowler hat.

Francher's hats pop up in almost every room in the stately mansion, even to decorate a display shelf.

"I find it a joyful experience to collect wonderful boater and bowler hats," he says. "Imagine what fun it is for me to now own a home from the period of time when it was fashionable to wear these handsome hats. I smile each time I exit our front door wearing one of my hats."