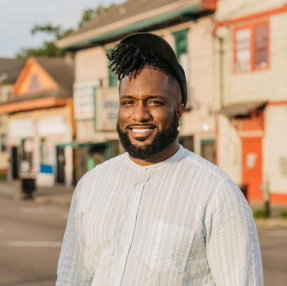 “Broad Community Connections has been integral to the health and economic wellness of the Broad Street corridor since its founding in 2008 and we are so excited to have Dasjon Jordan (“DJ”) continue his work with BCC that began in 2016, in his new role as Executive Director! The Board of Directors looks forward to Dasjon continuing the incredible programs we have and to lead us to do even more innovative and catalytic work on Broad Street,” said Kelsy Yeargain, BCC President of the Board of Directors.

BCC has engaged in a thorough and intentional leadership transition process. “Because of the organization’s reputation in the community, it received applications from an impressive cadre of professionals. Dasjon stood out as the best possible choice,” said Lauren C. Anderson, Coaching and Consulting Services, LLC, who supported the organization throughout the process, with funding from the Greater New Orleans Foundation and the W.K. Kellogg Foundation. “Dasjon has an uncanny ability to work with diverse stakeholders, hear their vision and translate that vision into action.”

Jeffrey Schwartz, now the Director of Economic Development for the City of New Orleans says, “I am so excited at the prospect of Dasjon becoming the new director of BCC. No one knows the work of BCC and the Broad Street communities better than he does. As the organization moves into its second decade of work and endeavors to expand on its legacy and impact, I am certain he will take BCC, Broad Street and Bayou Road businesses, and the community to the next level. I cannot wait to support Dasjon to accomplish BCC’s vision for a more just, vibrant, and equitable Broad Street.”

Jordan has worked as an economic development and cultural preservation consultant with organizations including the City of Veracruz Department of Urban Development and Public Works (Mexico), the MIT Community Innovators Lab, the Birmingham Civil Rights Institute (Alabama) and the eThekwini Municipality (Durban, South Africa). He holds a Master’s of City Planning from the Massachusetts Institute of Technology (MIT) and Bachelor’s of Architecture from Louisiana State University.

Prior to returning to BCC, Jordan served as the Strategy & Real Estate Development Manager for the Ujamaa Economic Development Corporation (Ujamaa EDC), the official steward of the Claiborne Cultural Innovation District (CID): the resident-driven, 19-block transformation of the elevated I-10 expressway along N. Claiborne Avenue. “Dasjon has contributed a great amount of vision, strategy, and dedication to equitable development in the Treme-Lafitte,” said Nyree Ramsey, the Executive Director of Ujamaa EDC. “We are sad to see him leave, but are excited to have him as a partner in the work of cultural preservation, economic justice, and environmental sustainability in our shared neighborhoods.”

Dasjon’s commitment to Bayou Road and Broad Street business community is evident. “He has been a part of this community for years,” said Vera Warren-Williams, founder and owner of the Community Book Center and member of the Bayou Road Business Association. “I am excited to see what continued partnerships, vision and refreshed strategy for tackling economic development in this more racially aware and COVID-impacted world looks like for BCC with him in the driver’s seat.”

“After a few years away supporting community development efforts in many different places, I’m excited to return home to New Orleans to serve the city that raised me and to BCC, the organization that has been foundational to my commitment to grassroots development,” Jordan said. “I’m humbled to be chosen as BCC’s steward and ready to model what it means to build a more socially just and sustainable world starting with Broad Street.”

Together with the BCC Board of Directors, the Refresh Collaborative and community stakeholders, Dasjon and BCC are charting the next phase of BCC’s work to continue their mission for Broad Street and the surrounding community. As has always been true, they will be guided by the voices of the community to serve the community.