Bringing Back the Ninth

Lowernine.org invites businesses to join them in rebuilding the Lower Ninth Ward.

In a lush backyard in the heart of the Lower Ninth Ward, people are gathered for a monthly celebration. The breeze is cool, the music is lively and the food is delicious. The partygoers are laughing and shouting with glee each time another one arrives; there are hugs and kisses all around. Frisbees are being tossed, and children and a few young adults are running about participating in an impromptu game of tag.

This party was held in honor of volunteers, neighbors and homeowners. It was thrown by the staff of lowernine.org in a neighborhood that hasn’t had a lot to celebrate.

A 2016 Data Center report found that the Lower Ninth Ward, which incurred the most damage from Hurricane Katrina’s wrath, currently is home to less than half the population it had prior to the storm. The population return is only 36.7 percent.

“Many of these residents are new and moving into the historic Holy Cross section where property values have risen,” said Laura Paul, executive director of lowernine.org. “Those prices are keeping pre-Katrina residents out of their own community. There are still many people who want to return home. We have 36 families on our waiting list and we have calls every week from families interested in moving home.”

Volunteers who saw the need to transition from the immediate disaster recovery volunteer work they had been doing into fixing homes founded lowernine.org in 2007. They used unskilled volunteers along with skilled supervision to rebuild and restore storm-damaged homes. The nonprofit’s mission was, and sadly after all these years still is, to help rebuild and revitalize this historic neighborhood.

Because of its proximity to the Industrial Canal levee breaches of August 29, 2005, 100 percent of the homes in the Lower Ninth Ward were declared uninhabitable.

“Prior to Katrina, many residents owned their homes outright,” said Donna Lednicky, lowernine’s volunteer grant writer, who also lives in the neighborhood. “People lost jobs, the insurance companies did not pay or underpaid, and people simply had no money to rebuild.” 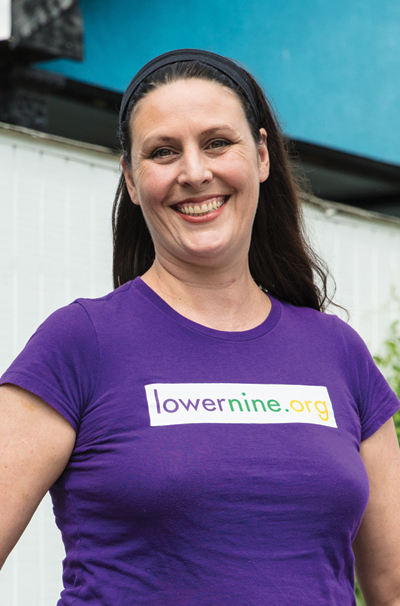 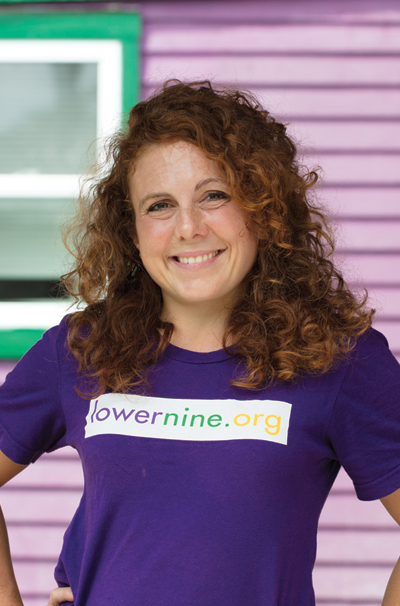 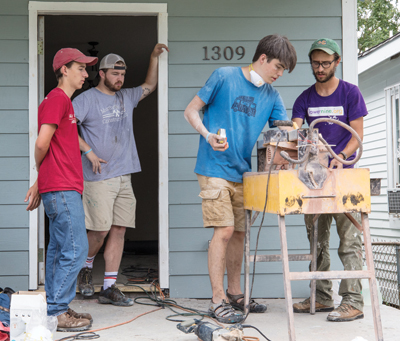 “Rebuilding in the Lower Nine has been behind other neighborhoods because of poverty and local, state, and federal government inaction,” said Paul.

Additionally, the neighborhood was the first to deal with toxic mold, toxic Chinese drywall and crooked contractors in the wake of the storm.

“Much of the work we’re doing now is to correct what already had supposedly been fixed,” said Emily Stieber, lowernine’s volunteer director.

Lowernine’s labor is offered for free, but homeowners must pay for materials.

“But we often can get some materials donated or at a reduced price,” Lednicky said. “We’re fortunate to get help from some businesses such as James Hardie who helps with cement board and Atlas Roofing with roofing materials.”

Through the use of volunteer labor and private donations, returning home becomes a much more affordable option for neighborhood residents.

"Rebuilding in the Lower Nine has been behind other neighborhoods because of poverty and local, state and federal government inaction."

“Without our help, homeowners must hire contractors on the open market, which many just cannot afford,” Lednicky said. “As it is, our families save up some money and we get some work done. Then they have to save up more money before the next work can be started.”

As of January 2016, the organization has completed 83 full rebuilds and more than 200 smaller home rehab and renovation projects. Volunteers continue to be the backbone of this organization and they come from all over the world.

Jonathan Criswell, a United States Marine who finished his service in November, is from California. He decided he needed to take a road trip before beginning college so he started from Portland and headed to New Orleans.

“I wanted to make my trip productive,” he said, “and I wanted to pick up some marketable skills. So far I’ve learned all about drywall, painting and tiling. I love interacting and meeting locals and seeing them light up with the work we’ve finished for them. Meeting and helping the families has been awesome.”

One volunteer so enjoyed her first visit she raised funds with a GoFundMe account so she could return. 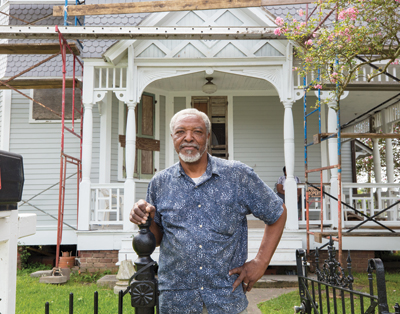 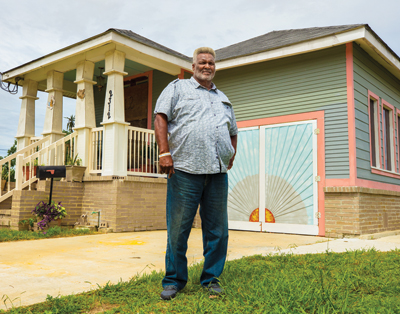 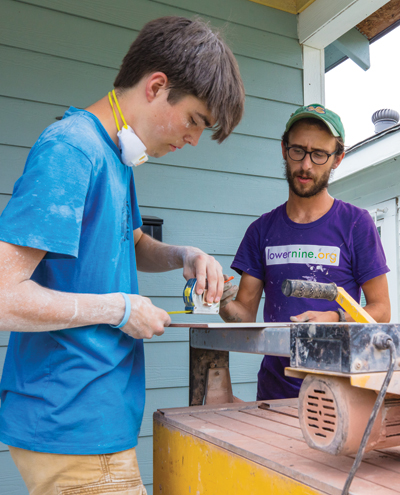 “In March I was blessed with the opportunity to go for a week through lowernine.org and volunteer in the Lower Ninth,” said Kirstie Juenger of New Paltz, New York. “I was assigned to a house and helped make it habitable after damage due to Hurricane Katrina. It was the most amazing and meaningful week of my life.”

Lowernine.org uses approximately 850 volunteers a year. With at least seven projects going at one time, there’s always something to keep people busy.

“If you don’t have construction skills, no worries,” said Stieber, “we’ve taught thousands of volunteers the skills they need to assist in the rebuild process, and we are sure you’ll learn them too.”

Paul said another important way business professionals can help is to educate themselves about the problems in the Lower Ninth Ward, learn the issues, and be an advocate for the neighborhood.

“Such things as the fact that the Army Corps of Engineers wants to widen the Industrial Canal,” said Paul. “That’s going to be especially hard on low wealth black families. It’s also important to learn about the ongoing inaction from all phases of government in order to truly help this neighborhood. And if our mission speaks to you, we guarantee you we will find a way for you and your business to contribute. There still is so much that needs to happen, so much opportunity and so many families to finally bring home.”

The nonprofit has brought back more residents to this area of the city than any single service organization.

Volunteers have come from all over the U.S., as well as from 37 different countries.

WAYS A COMPANY CAN PARTNER WITH LOWERNINE.ORG

Encourage employees to choose lowernine.org as their charity of choice every time they make Amazon purchases by using smile.amazon.com.

Get a group together to help with a rebuild.

Companies can come volunteer and have a fun-filled and meaningful experience. No construction skills or experience required.

Help provide food, drinks or supplies for the monthly thank you barbecue for volunteers, staff and neighbors.

Hold a tool drive — encourage people to donate tools they don’t use.

Have a calling to help bring families back to the area of New Orleans hardest hit by Hurricane Katrina.

Calvin Alexander is a historic district landmarks commissioner. He’s also the board president of the Lower 9th Ward Center of Sustainable Engagement and Development, a Holy Cross Neighborhood Association board member and a Lowernine.org board member. This lifelong Lower Nine resident also lost his home to Katrina.

“I’ve lived here for 40 years and this organization helped me get into our home,” he said. “It took insurance five years to act on our claim.” The damage to his two-story house on Caffin Avenue was extensive. “The bottom flooded and the roof blew off,” he said. “We couldn’t have managed without the help of Lowernine.”

Errol Joseph inherited his house on Forstall Street in 1981. He came home to take care of his parents.

“There was no debt on the house,” he said. “My wife and I were on track to retire.” Then the storm and levee breaches destroyed everything. “We had insurance but it didn’t even pay a nickel on a dollar.”  With the help of Lowernine.org the Josephs got back in their house in 2008 but are still adding finishing touches. “Without Lowernine we would not be anywhere,” Joseph said. “It’s been 11 years, two months and 19 days.”

Mission Lowernine.org, located in the Lower Ninth Ward neighborhood of New Orleans, Louisiana, is a 501(c)3 organization dedicated to rebuilding homes damaged by Hurricane Katrina and the levee breaches of 2005. Eleven years later there’s still work to do!

Major Fundraising Event Lowernine.org does not have a major fundraiser at this time, but the organization does generate a  lot of donations via their year-end campaign each year and occasionally participates in crowdfunding.