Summertime is best spent with a cool glass of iced tea in your hand. For New Orleans-based Reily Foods Company, the producers of Luzianne Iced Tea, every day can be a summer day.

Reily Foods employs approximately 700 employees, with about 200 of those working in New Orleans. The business started as a coffee company and has built its product base to include French Market Coffee, CDM Coffee, New England Coffee, Blue Plate Mayonnaise, Swans Down Cake Flour, La Martinique salad dressings, and other food and beverage items in addition to the multiple Luzianne Iced Tea varieties.

Luzianne is the No. 2 bagged iced tea brand in the United States after Lipton. According to the Tea Association of the U.S.A., Americans drank more than 80 billion servings of tea in 2015, and the U.S. is now the third-largest importer of tea after Russia and Afghanistan. Reily Foods Company has chosen the Port of New Orleans as its point of import for tea and other products since its founding in 1902.

“I buy tea, soluble coffee, chicory and soybean oil,” said Shalders. “Importing through the Port of New Orleans is perfect for both (production facility) locations. We’ve always had a very good experience with the Port, and import north of 3,000 TEUs (twenty-foot equivalent units) of tea, coffee, wheat, etc. annually.”

The Kearney Companies acts as one of Reily Food’s customs brokers and Reily temporarily stores its ingredients at Dupuy Storage and Forwarding for quality control and inspection. After that step, the separate products are shipped by truck to either the Reily Foods facility in New Orleans or in Knoxville, Tennessee, for production.

The New Orleans facility is a special point of satisfaction for David Darragh, President and CEO of Reily Foods Company.

“One of the things I’m most proud of is that our New Orleans facility was built in the mid-1960s, and through significant investment we have really continued to upgrade and expand its capabilities,” Darragh shared. “For seven years in a row it has achieved the highest global food safety rating you can get. We call it ‘food safety first’ and it’s a testament to the employees. That’s also the case with our Knoxville facility, which also has the highest rating.”

The Luzianne Iced Tea varieties are processed at both facilities, although the recipe blends are overseen by Shalders in New Orleans where he holds daily cuppings in the tasting room.

“Luzianne Tea is specifically designed for iced tea, so there is a lot of formulation work that goes into the final blend so that it delivers an iced tea that has a pleasing astringency and is clear and not cloudy,” Darragh explained. “That requires us to source teas from five different continents and blend them. Every year the crops are different and there is tweaking of the formula to ensure taste profile and quality. It is known for being the standard bearer for being the authentic southern iced tea.”

And what is his favorite variety of Luzianne tea? Darragh laughed at the question, “My favorite tea is the original black tea for iced tea with nothing in it. Straight up.”

Darragh sees a bright future for the centenarian company. He outlined four areas of focus: “Geographic expansion because we still have gaps where we can bring our products to new markets; channel expansion because food consumption and purchases are occurring in more and more places; innovation and acquisition. Acquisitions have played a big role in our growth and in our history, and they will continue in a strategic way.”

He added, “We are always looking for new ways to add value to the brands that are valuable to the company, and looking for ways where we can continue to differentiate ourselves and excite the consumer through innovation. Even though we are 114 years old we still have a lot of headroom for growth.” 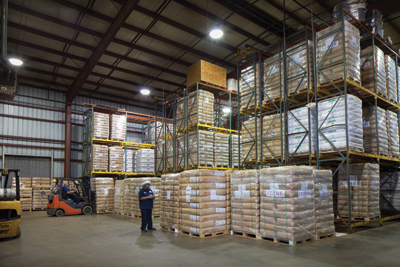 Tea leaves are imported from five continents to this New Orleans facility. 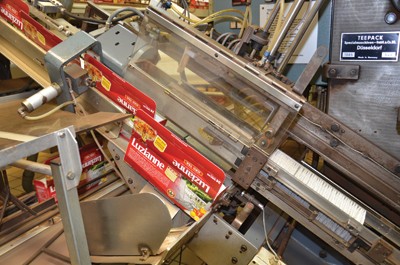