While the Crescent City is known for cocktails, coffee has been its favorite drink for more than 215 years.

Of all the scents and flavors associated with New Orleans, none permeates quite like coffee. It’s not just in the city’s world-famous restaurants or neighborhood coffee shops, it’s in the air — from major coffee bean roasters on the Industrial Canal to boutique roasters in the French Quarter, Garden District, Black Pearl and St. Claude neighborhoods. Home to America’s largest brand, as well as several emerging labels, the Crescent City’s coffee industry is percolating strong as ever.

While coffee has undoubtedly been part of life in New Orleans since it was founded in 1718, the first record of coffee being imported into New Orleans dates to 1802, when 1,438 bags arrived in the Crescent City.

Soon, green coffee shipments from Cuba and other Caribbean islands were matched by batches from Central and South America. By the 1840s, the bean helped the Port of New Orleans grow to the second largest port in the United States after New York and the fourth-largest in the world. The industry included importers, roasters, packagers, shippers and thousands of laborers to unload and load ships along the waterfront.

In the 19th century, stevedores carried single 132-pound bags on their heads from the ships’ cargo hold to the warehouse where the coffee was stored before being roasted and shipped elsewhere. By 1857, more than 530,000 bags of coffee arrived, helping the city earn the nickname of the “Logical Port” for Latin American imports.

By the turn of the 20th century, the riverfront between Canal and Julia streets were dominated by coffee. Dozens of importers operated in New Orleans, supplying hundreds of roasters around the country. Though industrialization, mechanical innovations and corporate consolidations through the 1900s led to reductions in the needed workforce, the industry and New Orleans’ place in the coffee industry remained strong. The American Coffee Co. was founded in 1890 at 423 South Peters Street, and introduced labels such as French Market, Dixieland and Honeymoon. American still roasts, including French Market Coffee, at 800 Magazine Street.

Local and visitors alike have enjoyed coffee around the clock, be it with beignets in the morning, on a coffee break (a fabled New Orleans innovation) or after dinner with a Café Brûlot Diabolique (“devilishly burned coffee”), a flaming concoction of coffee, brandy, and spices invented at Antoine’s Restaurant.

Coffee helped the city come back to life after Hurricane Katrina ravaged New Orleans in late August 2005. Folgers restarted its plant on Chef Menteur Highway about a week after the storm, housing workers and their families on plant grounds. The majority of cargo on the first commercial ship to arrive in New Orleans, two weeks after the storm, was coffee beans bound for Folgers’ roasting plants.

Today, New Orleans is the nation’s premier coffee-handling port. More than 1.29 million tons of coffee were imported through the Port of New Orleans between 2011-15, in the most recent five-year statistical period available. There are 14 coffee warehouses with more than 5.5 million square feet of storage space, and six roasting facilities within a 20-mile radius, according to figures provided by the Port of New Orleans.

Coffee is shipped to the city in large containers from 31 coffee-producing countries, and sent to large, bulk-processing operations, including Dupuy Storage and Forwarding Corp. (the largest in the United States) and Smucker Coffee Silo Operations (formerly Silocaf), the largest facility of its kind in the world. There are also a growing number of micro-roasters who are bringing stripped-down specialty coffees without additions into popular tastes. 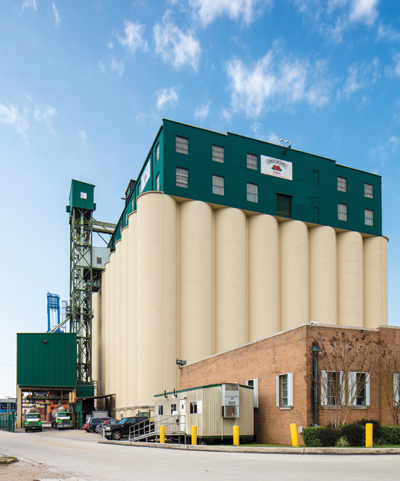 Headquartered in Baton Rouge, Community Coffee Co. has a ubiquitous presence in the New Orleans market via sales in local grocery stores, restaurants and coffee shops. Community is privately held and does not provide specific data related to its volume, sales or imports. It is, however, one of the largest coffee businesses in the region.

“In 1919, our current owner’s great-grandfather, ‘Cap’ Saurage, discovered the secret of making our special coffee,” said Jodi Conachen, Community Coffee Co.’s general manager of communications. “Now in its 97th year, Community Coffee Co. houses the largest family-owned and -operated retail coffee brand in America, and four generations of the Saurage family have operated the company since its inception.”

The New Orleans-centric coffee-and-chicory blend is one of many Community offers. Conachen said it’s a growing product outside of Louisiana as well as within state lines.

“Our version of this Southern favorite strikes a balance between 100-percent Arabica coffee beans and high-quality chicory for a more intense body and flavor than coffee alone,” she says. “In Louisiana, many take it black, but the café-au-lait version with steamed milk gives a true taste of New Orleans.”

French Truck Coffee was one of the pioneers of specialty coffee in New Orleans. Founder Geoffrey Meeker started the company in May 2012 in his laundry room on Fern Street in the Carrollton neighborhood.

“My wife made me move [the company] out when the weight of the beans started to bend the floor boards,” Meeker said.

The business focused mostly on wholesale before opening its Magazine Street location with a retail shop. Next came a spot on Dryades with a coffee-centric café. A partnership with an existing roaster in Tennessee created French Truck Memphis, home to a roasting space and small retail shop.

While Meeker did not disclose how much coffee French Truck sold last year, it is evident that the business is booming. 2017 may be the company’s best year yet. In May, French Truck will open a 1,100-square-foot French Quarter coffee and pastry shop in the May & Ellis Building at 221 Chartres Street. In June, it will open a 3,500-square-foot roasting facility and café in the redevelopment of the old Sears Roebuck Fulfillment Center in Memphis. In July, the company will open on Government Street in Baton Rouge.

“We have been prepping for this for a while,” Meeker said. “We currently have 36 employees and will likely double that by next year.”

In 1850, James Folger of San Francisco got into the coffee business when he was just 14. By 1880, he established “cup-testing” coffee beans for their flavor rather than appearance. After 110 years in business in California, the Folgers company moved to New Orleans in 1960 to take advantage of cheaper shipping routes from Central America to the Gulf Coast.

Procter & Gamble bought Folgers in 1963 and began distributing it nationally. Soon it was the top-selling brand in the at-home coffee category in the country, a position it still holds today.

“Folgers, Smucker’s, Jif and Milk Bone are all beloved by our consumers, and we are proud that at least one of our products can be found in 93 percent of U.S. households today,” Burns said. 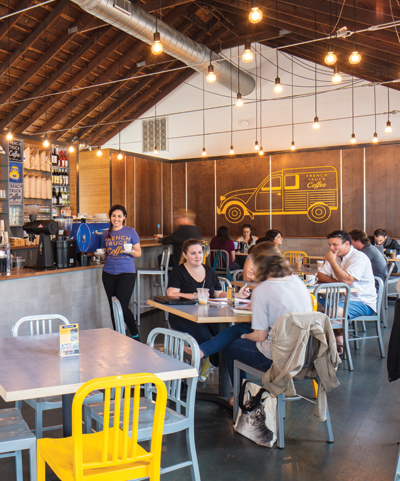 Mojo Coffee Roasters began a little more than two years ago in a 1,600-square-foot facility near the Riverbend area Uptown as an evolution of Mojo Coffee House’s success. He started the roasting business with partners Demian Estevez and Angela Jackson, owners of Mojo Coffee House.
“We had a very clear idea of what kind of coffee program we wanted, and we weren’t able to find it,” Cronin said. “So, we decided to do it ourselves. It was the next step in getting into the industry for us.”

In addition to supplying Mojo’s shops and locations across New Orleans, they supply stores across the country.

“We started out with a volume of a couple hundred pounds a week, and now we’re close to 1,000 pounds a week,” he said. “But still doing it in a real craft style.”

Mojo sources its beans from Africa and the Americas. Its seasonal bean selection and roasting focus on drawing out the innate sweetness and unique flavor characteristics of each of coffee the brand offers.

“I swap coffees in and out according to seasonal availability so that we get the freshest quality we can,” Cronin said. “It keeps it interesting. (Our offerings are) constantly in a state of flux, so we always have new stuff for people to try.”

Despite the popularity of national chain coffee shops, where a study of Italian is needed to order a drink, Cronin said the coffee scene has really blossomed in New Orleans.

“We want to keep the traditions we have and expand it into new things,” he said. “We’re taking on new clients. We’re buying more and more interesting coffees. We’re lucky to be part of it.”

The root of a unique New Orleans flavor

Coffee and chicory is a New Orleans tradition that dates back to the French colonial era. The root of the wild, blue-flowered Cichorium intybu reportedly was first dried, roasted, ground and used as a filler in imperial France, when the country was short on coffee during the Continental Blockade. Napoleon’s armies brought chicory back to France from northern Europe in order to extend their coffee supplies, and Parisians began to prefer the enhanced flavor of coffee and chicory and continued to drink it after the blockade was lifted.

As capital of a French colony, New Orleans was under French cultural influence and wanted to enjoy the same tastes and trends as Paris, the mother country’s capital. The root became especially important to the city’s culinary identity during the Civil War, when the Union blockade prevented coffee imports, and locals used chicory, beets, acorns, parsnips and burnt sugar as additives to extend the supply.

The taste for chicory coffee has survived. While most national brands only use coffee beans in their grinds, local companies offer blends with and without chicory so those who like it may enjoy its strong flavor.

Historically, the ancient Egyptians are thought to have first cultivated chicory as a medicinal plant. It is also thought that the ancient Greeks and Romans used it for curative purposes as well for health concerns including liver enlargement, jaundice, inflammation, and to stimulate appetite, said Jodi Conachen, Community Coffee Co.’s general manager of communications.

It may also give your morning cup an extra nutrient boost.

“Researchers know that chicory root is rich in beta-carotene and may help decrease swelling,” Conachen said. “More recently, chicory root is being used to produce inulin, a prebiotic that helps promote digestive health, as a fiber source for the food industry in a variety of products including breakfast bars, yogurt, bread and even ice cream.” 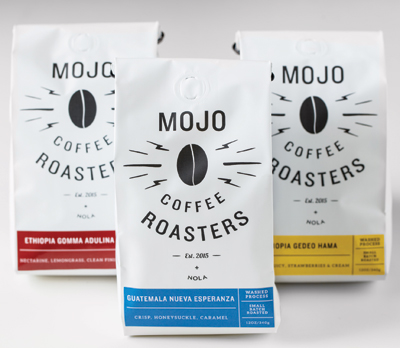 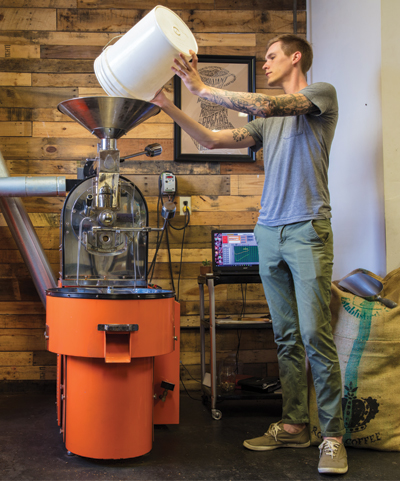