The Yuhuang Chemical Facility is significant not only for its positive impact on the area’s economy, but also because it marks the first big industrial project in Louisiana by a top 25 Chinese chemical company: Shandong Yuhuang Chemical Co. Ltd.

While a ground-breaking ceremony was held in September 2015, actual construction activity did not begin until early 2017. The expected completion date is mid-2020.

Phase one of the project, which involves three total phases, is currently underway with several objectives already met. Charlie Yao, CEO of Yuhuang Chemical, tells Port Log, “Our marine off-loading facility has been completed and over 5,000 piles have been driven with piping and foundation work now proceeding.”

“YCI has begun taking delivery of major equipment and components for integration into the facility. Engineering and procurement of major equipment is virtually complete with construction being the only major project development component remaining,” he added.

At this point in the process, about 300 constructions workers are employed, plus 50 Yuhuang Chemical employees.

“We anticipate that in September of this year, there will be a considerable increase in construction job opportunities as we move into a very aggressive stage of construction,” said Yao.

Long-term, the venture is expected to create up to 2,500 construction jobs at its peak over the life of the three phases including 250 permanent jobs with an average salary of $85,000. Another 2,365 indirect jobs will be financially beneficial to the area as well. The company estimates approximately 1,000 construction jobs and 100 permanent jobs by the end of Phase I.

The start date for phase two is currently being evaluated by Yuhuang Chemical and has to be determined; however, it involves the construction of another methanol unit to increase methanol production to about three million four hundred metric tons per year.

Plans for phase three include a methanol derivatives plant to produce intermediate chemicals.

Upon completion of the second phase, the colossal Yuhuang Chemical Facility will be one of the largest facilities of its kind in the United States, with a production level of 9,900 metric tons of IMPCA quality methanol per day.

Helping seal the deal for Yuhuang Chemical to build in Louisiana, the Louisiana Economic Development (LED) provided the company with a performance-based grant, a $5 million incentive to be paid over five years starting in 2017, which offsets infrastructure costs.

Other benefits for Yuhuang Chemical come from the LED’s FastStart workforce training program and from the State of Louisiana’s Quality Jobs and Industrial Tax Exemption programs.

As of this August, Koch Methanol acquired an indirect minority equity interest in YCI Methanol One, LLC (YCI Methanol).

As part of its investment, affiliates of Koch Methanol will receive the exclusive methanol offtake rights from the new facility, as well as construct, own, and operate the methanol terminal assets for the outbound flow of methanol via marine, rail, and truck logistics.

‘YCI has developed a strong execution plan for this project and we’ve been impressed with the knowledge and dedication of the team driving it forward,” said Jim Sorlie, senior vice president with Koch Methanol.

The Port of South Louisiana

In 2017, the Port of South Louisiana set an unprecedented cargo-volume record, as its total tonnage was more than 307.8 million short tons – an amount that once again makes it the largest tonnage port in the Western Hemisphere.

The 2017 tonnage total marks a 4.4 percent increase from the 2016 total of 294.9 million short tons. While there are many factors contributing to the eye-popping 2017 totals, large percentage increases in the handling of coal, lignite, soda, chemicals, fertilizers and steel products greatly contributed to the rise of 12.9 million short tons from last year to two years ago.

The Port of South Louisiana continues to draw billions of dollars in capital investments from foreign companies such as YCI, and according to experts, this is only the beginning. 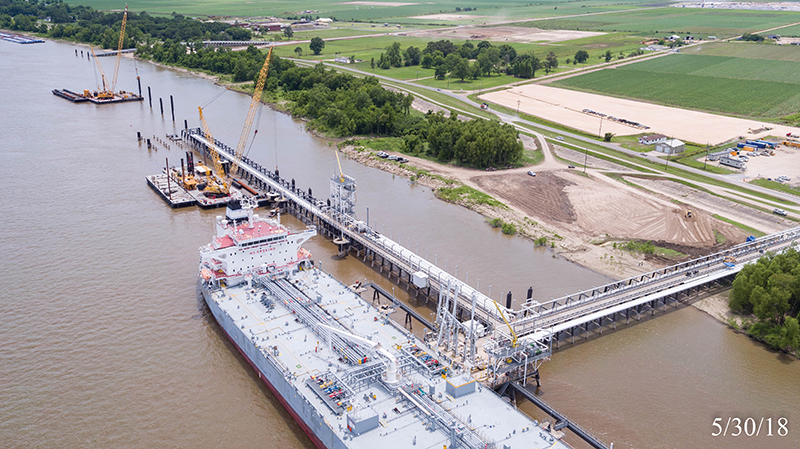 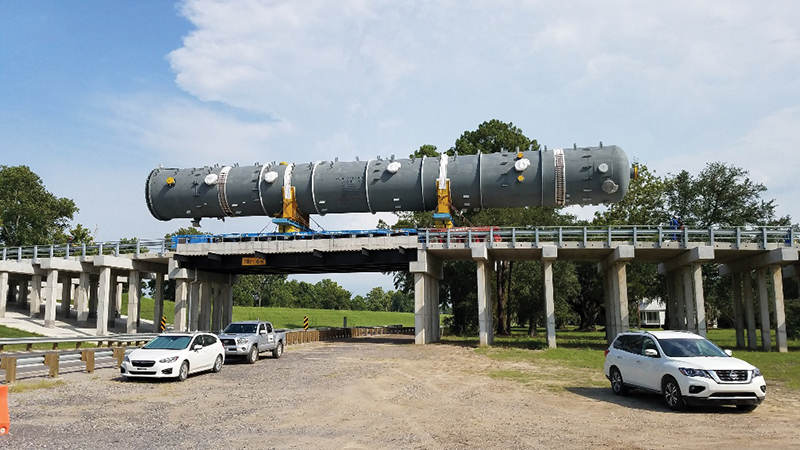 Picture of Distillation Column over the heavy haul bridge.