The NFL blew the call.

Boycott Bowl organizers hope the NFL won’t blow this one.

“As a tribute to what happened, we challenge the NFL to match the more than $50,000 the Who Dat Nation raised at Boycott Bowl so we can donate more than $100,000 to the New Orleans Recreation Development Foundation,” said Travis Laurendine, one of the organizers behind last weekend’s Boycott Bowl, who’s set to turn over event proceeds to NORD reps at a press conference tomorrow.

“New Orleans suffered a huge economic loss due to one bad pass interference call,” he said. “Some say it was upwards of $100 million. We’re asking the NFL, specifically NFL Commissioner Roger Goodell, to match the Who Dat Nation’s donation. And if he won’t do it, our business community should step up and play ball.”

Shortly after the New Orleans Saints’ NFL Conference loss on Sunday, Jan. 20, when the referees’ pass interference no-call led the Los Angeles Rams to their 26-23 overtime victory, assuring them a trip to the Super Bowl, Brandon Rizzuto, a former New Orleans VooDoo arena football team general manager, posted an open letter online. He cried foul, and suggested the city kick off an alternative tableau so that locals could boycott the Super Bowl on Sunday, Feb. 3, in protest.

The three Boycott Bowl quarterbacks felt New Orleans should take a collective knee in defiance and create a blitz that would benefit New Orleans musicians, chefs, bartenders and the entire service industry instead of the NFL.

And they scored a touchdown with a wildly successful event attended by thousands. But, Laurendine said the Boycott Bowl was actually years in the making.

“When I was a music promoter repping acts like DJ Jubilee, Partners-N-Crime and Juvenile, I was the first promoter in the city to use Facebook Events and that gave me an edge,” said serial entrepreneur Laurendine. “With Facebook Events, combined with my new product ShowSparker.com, you can find out how many people are interested in coming to an event and test the temperature on the internet before deciding how big a show to produce.”

Seven years later, Chen founded Kickstarter to crowdfund any creative project. Laurendine said it has raised more than $8 billion, but still hasn’t solved the “event-oriented” part of his original idea. Laurendine said demand data “gleams” on ShowSparker.com, acting like an offensive line that enables organizers to evaluate the number of people who actually plan on attending an event. For Boycott Bowl, he said more than 70,000 people indicated interest on its Facebook Event page, reversing the risk of producing it.

Laurendine said putting the event together was like running a two-week marathon, but there were “years of grind” behind it. While formulating his risk mitigation strategy over time, he finally created ShowSparker in California with one of his best friends, Chase Farmer. He said Farmer left Apple to work on the project after it “sparked” his interest as a performing musician in San Francisco. Laurendine said his platform allows fans to pool together funds to create a live show, in any location, risk-free for the performers and promoters, and encourages users to “spark” the shows they want to see in their communities.

“ShowSparker is financed through an investment fund I started with a friend who is the most successful internet entrepreneur in Louisiana history,” said Laurendine, who wants to reveal his partner’s identity at an upcoming launch announcement. “I used ShowSparker to sell tickets for Boycott Bowl, and it became this incredible proof of concept for the entire premise of the investment fund. You can conceive a platform that can change the world from New Orleans, finance it from New Orleanians, test it in New Orleans with talent from the world’s top tech companies and then sell it to the world from a New Orleans headquarters.”

“This type of event would normally take about six to eight months to plan, and you would probably have to secure a venue a year in advance,” said Laurendine. “ShowSparker produced the show in just days from a finance and ticketing perspective, but hats off to Brandon and Kango. These dudes, they have families and jobs and they got in trouble with everyone for taking the time to work their tails off to produce this event.”

Laurendine said New Orleans City Councilmember At-Large Helena Moreno was also instrumental in the field of play, throwing the support of City Hall behind it, blocking any gridiron gridlock.

“She gave us the confidence that this event was really going to happen with the city’s consent,” he said. “She was responsible for booking Big Freedia for us, and she even brought us support from New Orleans Mayor LaToya Cantrell, who stole the show dancing on stage at Boycott Bowl with Choppa and the mayor’s favorite duo Partners-N-Crime.”

“We were simply looking for an opportunity to turn a negative into a positive,” said Moreno. “The whole event had amazing energy.”

“Helping raise funds for the kids of New Orleans through NORD is so important, and it’s gratifying to see the energy and passion of our Who Dat Nation come together for a positive outcome,” she said. “On the Council, we’ve focused on the ways trauma is impacting young people in this city. NORD is an essential part of the support system we need to help identify and repair that trauma. We’ll continue to work with NORD to build trauma-informed coaching and instructional programs to help make gains where we can.”

Laurendine said Boycott Bowl would never have reached the end zone without the help of Aprés Lounge that assured them the yardage on Fulton Street for their block party and a mega VIP party lounge, and the new owners at Ernst Café that gave them access to an additional VIP balcony that generated $8,000 more for NORD in 12 hours the night before the event.

Boycott Bowl sold 4,300 tickets and organizers estimate 5,000 partied within the event’s boundaries, while seven to eight thousand hovered off-sides listening to the music. When they announced the event was sold out, Laurendine said it led a majority of their Facebook spillover crowd of 68,000, that didn’t buy into the Boycott Bowl ShowSparker, to join the thousands who were already participating in multiple Saints second lines and inspired events in the downtown area that were also organized in protest of Super Bowl Sunday.

“We nearly recreated the economic activity of a Saints game,” said Laurendine. “And the money went to the service industry of New Orleans, not the NFL. That was the goal. Raising more than $50,000 for the city’s most important organization, NORD, is lagniappe.”

“We deserve a united New Orleans,” said Laurendine. “That’s how we’re going to win and how the future generations of New Orleanians are going to win. Boycott Bowl was multicultural. All walks of life attended, and it was a fundraiser. Tickets were only $10. Both white and black citizens were supporting something together – an act of defiance, civil disobedience – with entertainment that crossed genres. The event was a hybrid of diversity. We had diverse performers, and those who came represented a hybrid of the city’s citizenry. This type of event would only make sense in New Orleans.”

Laurendine estimates Boycott Bowl got tens of millions of media impressions because the story went global. Otherwise, he said, you would have had to pay a PR firm seven figures to generate that type of media interest.

A local promoter wanted to charge Laurendine’s team more than $350,000 to put the festival together, but Laurendine said they passed.

“No one took a risk on the Who Dat Nation,” he said, noting that despite three levels of sponsorship opportunities at Boycott Bowl, no corporate sponsors donated to the event, only community ones.”

“ShowSparker was able to produce the event without any corporate help because it eliminated the risk of getting it together,” he said. “It showed us the supply and demand for a show and generated guaranteed funds for the entity we were supporting. It always makes me sick to see fundraisers lose money or break even, so I decided to use our platform to deliver a guaranteed win which ended up being the largest fundraiser in NORD history.”

“The Who Dat Nation will be giving NORD well over $50,000 tomorrow directly from the ShowSparker backend to NORDF’s bank account,” he said. “We’d like to turn that into $100,000 or more. It’s not too late for the business community, banks, law firms and other sponsors to throw NORD a Hail Mary and match what we did. They can stand with the Who Dat Nation and help us send a strong message to the NFL.” 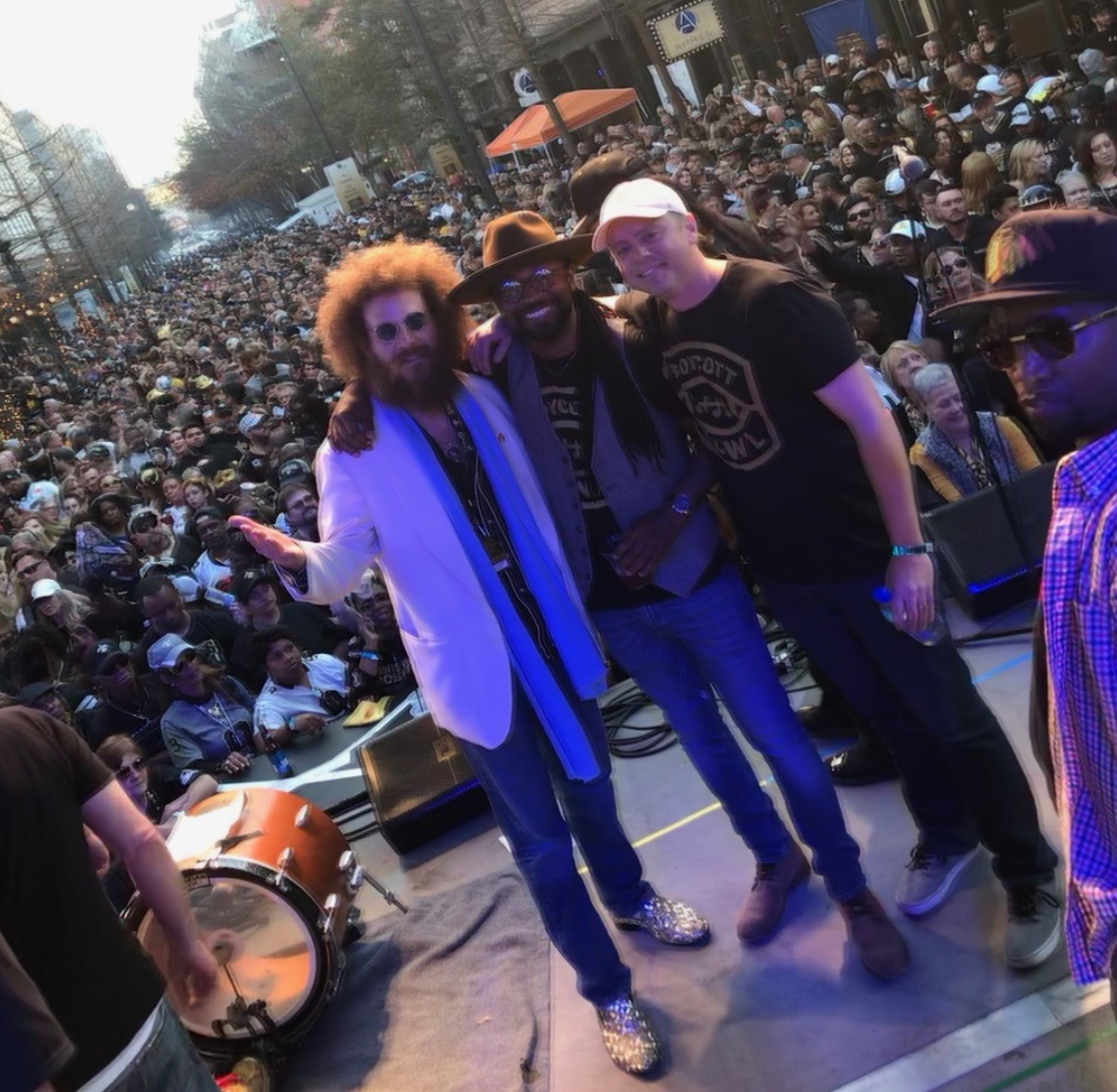 Cantrell Joins 11 Mayors in Pledge for 'Green and Just' Recovery