Many artists who have lived in and around New Orleans are known for their signature subjects.

Rodrigue, who passed away 2 years ago this week, is being celebrated 135 miles west of his New Orleans gallery on 730 Royal St.

The George Rodrigue Park committee released plans for a new park to be dedicated in the artist’s honor at 211 E. Main St. in the New Iberia historic district in New Iberia, LA, his hometown.

The pocket park will celebrate Rodrigue's long career as an arts advocate and philanthropist.

“Dad was not only a painter, but also a true community leader in his native Louisiana,” Jacques Rodrigue, son of the artist, said. “He always said that if he wasn't from New Iberia that he probably would not have ever painted in the first place. My family and I are grateful to everyone involved in this memorial park project.”

Rodrigue began painting in the third grade while bedridden with polio. He studied at the University of Louisiana at Lafayette and the Art Center College of Design in Pasadena, CA. In the 1960s he started to paint Louisiana landscapes, and his focus evolved to outdoor family gatherings and southwest Louisiana 19th century and early 20th century genre scenes. Those works were often awash with the moss-clad oak trees of Acadiana.

It was in the early 1990s when Rodrigue's Blue Dog paintings catapulted him to worldwide acclaim.

Based on the Loup-Garou Cajun werewolf legend, and modeled after his own spaniel/ terrier Tiffany, Rodrigue's Blue Dog was splashed onto the arts scene by Absolut Vodka in 1992 when Rodrigue was honored as an Absolut Vodka artist, joining famous artists such as Andy Warhol and glass artist Hans Godo Frabel. 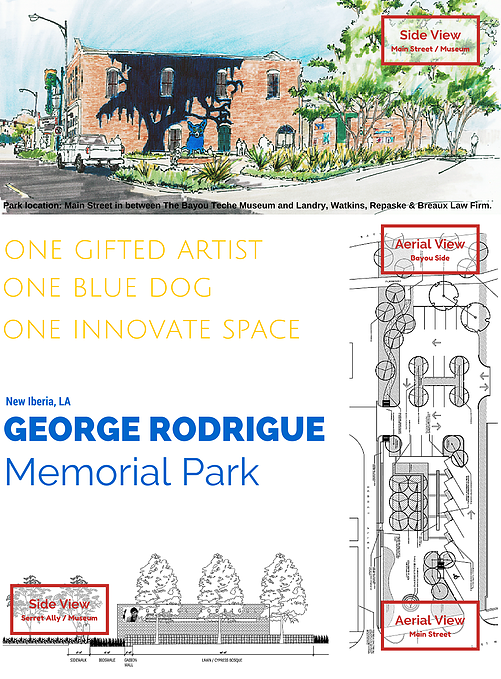 The Xerox Corporation also featured the Blue Dog in its national ad campaigns.

The iconic Blue Dog’s white nose and yellow eyes made its mark in the pop art world and gave Rodrigue an international following that he capitalized on in 2009 by creating the George Rodrigue Foundation of the Arts. The nonprofit 501(c)(3) organization has raised millions for post-Katrina relief efforts, art scholarships and art supplies for school kids, encourages the use of art within all curriculums and supports a variety of art educational programs.

There are Rodrigue galleries in Carmel, CA, Lafayette, LA and in the French Quarter where prints cost anywhere from $1,500 to $20,000.

Since his death, the Rodrigue Studio on Royal Street is no longer appraising or authenticating Rodrigue’s works of art currently in private collections or on the secondary market.

If you have an original one-of-a-kind work on canvas, the Rodrigue family announced they are interested in documenting that painting in preparation of a catalogue raisonné of Rodrigue’s entire life’s work. They are asking collectors to contact them through their website.

Rodrigue celebrated 40-year career retrospectives at the Dixon Gallery and Gardens Museum in Memphis, TN (2007) and the New Orleans Museum of Art (2008), both of which broke museum records at those locations for living artists or contemporary shows.

Rodrigue lost a long battle with cancer at the age of 69, and a public funeral mass was held for him on December 19, 2013, at St. Louis Cathedral in Jackson Square. Rodrigue is buried in Holy Family Cemetery in New Iberia, just a 6 minutes drive from the new park to be dedicated in his honor.

Dan Spiller of Viator & Associates designed the park, which will feature an original Blue Dog sculpture made by Rodrigue as well as a mural of his iconic Live Oak tree. A timeline of Rodrigue's life and art career will also be included, along with landscaping, signage, benches and additional parking for downtown attractions and events.

The park will be located at the site of the Masonic Lodge between the Bayou Teche Museum and the Shadows-on-the-Teche plantation home. The lodge burned in 2011 and property owner, the Landry, Watkins, Repaske & Breaux law firm, donated the use of the land for the park.

“We have tremendous support, partnerships and excitement from many entities – The George Rodrigue Foundation of the Arts in New Orleans, Viator & Associates, Inc. Landscape Architects, the City of New Iberia, Landry, Watkins, Repaske & Breaux, Iberia Parish Convention & Visitors Bureau and On-Tap and the On-Tap Foundation,” park creator Paul Schexnayder said. “In fact, On-Tap will be donating some of the proceeds from their annual Dragon Boat Race on April 16, 2016, to the park fund.”

Rodrigue is survived by his sons Jacques of New Orleans and Andre of Lafayette, and his widow Wendy Rodrigue, who has a thriving blog site that’s actively keeping the memory of the famed Blue Dog artist alive.