Blue Bikes Will Be Ready to Ride by Sept. 1 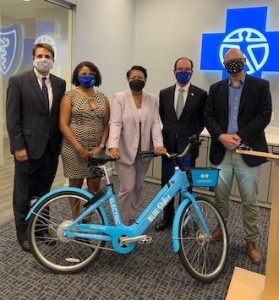 Mayor LaToya Cantrell (center) is joined by other Blue Bike supporters at a July 28 press conference.

NEW ORLEANS — Mayor LaToya Cantrell has announced that the Blue Bikes bike share program will return to the city’s streets later this summer. A fleet of 500 pedal-assist e-bikes will be ready to ride by Sept. 1.

“The upcoming launch of Blue Bikes is a major accomplishment in our commitment to improve equity, connectivity, safety and efficiency in our transportation networks,” said Cantrell in a press release. “Bike share is a critical component of our transportation system; people rely on it to get to work, and we are excited that 500 bikes will be back on the streets soon. We appreciate the partnership in the Greater New Orleans Foundation, which helped develop the new program, and are thankful for the return of Blue Cross Blue Shield of Louisiana as lead sponsor.”

The city announced the relaunch of Blue Bikes in partnership with Blue Krewe, a nonprofit group that operates the program, and reps from Blue Cross and Blue Shield.

Blue Bikes first launched in 2017 and was in operation through spring 2020.

That first local foray into bike sharing was popular with residents but met an untimely demise thanks to the pandemic and changing corporate priorities: Blue Bikes was originally operated by Social Bicycles, a startup based in Brooklyn, N.Y. In 2018, the company changed its name to Jump. Then, a few months later, it was acquired by tech behemoth Uber. In May of 2020, however, Uber sold Jump to Lime, the scooter and bike-sharing startup based in San Francisco, and shortly thereafter Lime decided to discontinue the New Orleans bikeshare program altogether.

Blue Krewe, led by Geoff Coats, led the charge to get bikes back on the street. Coats is the former general manager of the original Blue Bikes program.

When Blue Bikes relaunches, it will be in the Lower Garden District, Central City, the Central Business District, the French Quarter, the Marigny, the Bywater, the Seventh Ward, Treme and Mid-City.

Blue Bikes 2.0 will have a particular focus on serving areas identified in the City of New Orleans’ Bicycle Equity Index, which are primarily lower-income and communities of color with low car ownership rates.

People can sign up to ride Blue Bikes by downloading the Blue Bikes Nola app. People can also ride through the $0.15 per minute pay-as-you-go option or with a $25 monthly membership. Additionally, through the Blue Bikes for All program, New Orleans residents who qualify for Medicaid or Louisiana Purchase (SNAP) will be able to access a reduced-price plan of $4 per month. To learn more about the Blue Bikes pricing and system area, visit BlueBikesNola.com.