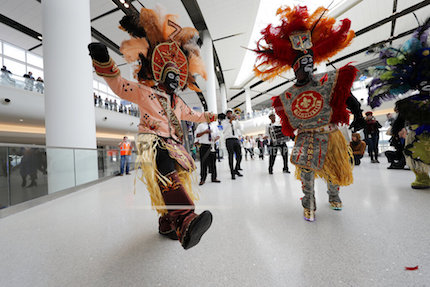 NEW ORLEANS – It was a busy week for business news in south Louisiana.

The biggest story was the opening of the city’s new $1.3 billion airport terminal on Wednesday. Initial reviews are positive as travelers marvel as the bright, white and fully modern structure that’s stocked with improved restaurant options and the latest travel conveniences (such as charging stations at more than half of the airport seats). Unfortunately, there’s been some logistical turbulence as well: on Thursday, social media was overflowing with posts from people whose luggage didn’t arrive at their destinations as planned. There also have been reports of traffic snarls on roads leading to and from the new terminal. Construction has begun on the new exits from I-10 to provide quicker access to the airport but it will be several years before the project is completed, so in the meantime the increased traffic delays will likely be the new normal. A BizNewOrleans.com correspondent will be traveling through the new terminal this evening and will post about his experiences.

The other big story of the week was Monday’s news that First Horizon Bank out of Memphis, Tennessee, is entering into a “merger of equals” with Lafayette-based IberiaBank that will create a new financial powerhouse with $75 billion in assets with locations across the south. It’s great news for IberiaBank’s stockholders and a widely anticipated move for a bank that has been growing rapidly over the last two decades. On the down side, the corporate headquarters will move to Memphis and the IberiaBank name will disappear. … It turns out this blockbuster deal is not the only big banking story of the week: Today, BizNewOrleans.com learned that the Hammond-based First Guaranty Bank completed the acquisition of The Union Bank in Marksville. First Guaranty has 1.8 billion in assets; Union has 257 million so this purchase will put First Guaranty over the 2 billion mark.

Also this week, there were two exciting stories about new technology jobs in the area: On Wednesday, Gov. Edwards and Mayor Cantrell announced expansions by three biotech firms – AxoSim, Cadex Genomics and Obatala Sciences – that will create 135 new jobs at the University of New Orleans and the New Orleans BioInnovation Center, a biotech incubator where all three firms launched local startup operations. Two days later, the news broke that London-based company Testronic will launch a new 150-job testing facility for digital games in New Orleans. The company provides outsourced testing services to a global clientele in the digital gaming industry. The new facility will be housed in the New Orleans Exchange Centre, 935 Gravier St.

In other news: the Small Business Administration announced that businesses adversely affected by the partial collapse of the Hard Rock Hotel on Oct. 12 are eligible for low-interest federal disaster loans. … and Fidelity Bank said it would purchase the historic building at 353 Carondelet Street to be the future site of Fidelity’s corporate headquarters.

And finally, there are of course there are two sides to every story, but usually both sides of the story don’t come from the same source: On Wednesday, while President Trump was bashing the state’s economy at a rally for gubernatorial candidate Eddie Rispone, the White House sent several tweets praising Louisiana’s “booming” economy with its lowest unemployment rate since 2008 and a strong energy industry. Chaotic damage control ensued …