Upon entering the downtown offices of Greater New Orleans, Inc., the words most likely to come out of a visitor’s mouth are, “Wow, look at that view!” The more than 9,000-square-foot digs are on the 34th floor inside the Energy Centre at 1100 Poydras and overlook the Mercedes-Benz Superdome. On a clear day, it’s easy to see Lake Pontchartrain.

“The big factor here was the location,” says Jeff Teague, GNO, Inc. senior vice president of finance and administration, citing easy access to the interstate and the Westbank. “We are out and about all day, going to meetings and events, so for us to be able to travel is important. We also have a lot of events and meetings here in our offices.”

When the regional economic development alliance’s 10-year lease at Canal Place ended in May 2015, Teague was elected point person for the daunting project of finding a new space. After deciding on the Poydras Street location, Teague employed NANO LLC architectural and interior design firm to help redesign the space, which used to be home to an accounting firm.

The new space was a combination of three separate office suites into a single space, requiring NANO’s licensed architecture services. Glass walls allow light to filter through the private offices and bring the expansive views to everyone in the company. 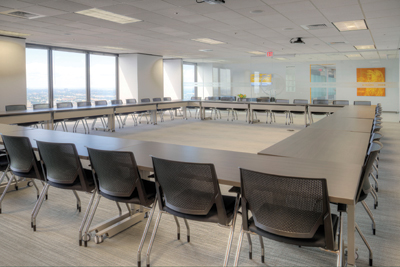 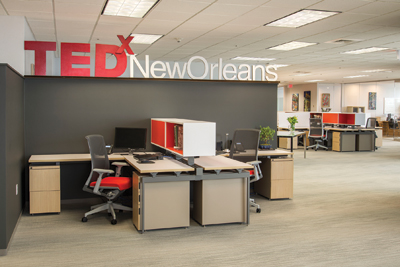 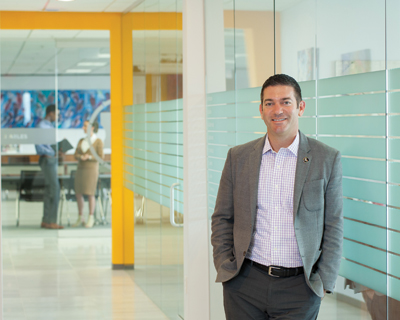 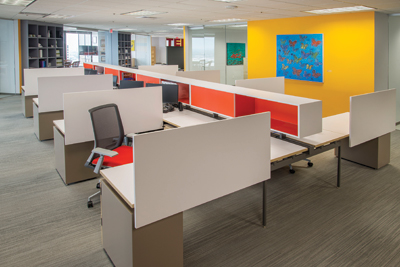 TOP LEFT- The 1,500-square-foot boardroom has mobile tables that break down for storage and can be easily organized in any configuration. GNO, Inc., often lends the space out to its partner organizations for retreats and meetings. TOP RIGHT- Prior to the redesign, the office had more walls and bookcases, was darker and had a closed floor plan. The NANO team opened it up and brought in the light.  BOTTOM LEFT- Michael Hecht, GNO, Inc. president BOTTOM RIGHT- The design team at NANO LLC combined three separate office spaces to create the single space GNO Inc. now occupies.

“It also allows more interaction with people in the office,” says Teague. “I can see visitors as they walk by. The move also allowed us to design it how we wanted it and was an opportunity for a cohesive furniture plan.”

NANO architecture worked with two local contract furniture dealers, KV Workspace and AOS, to select all of the sleek, new, modern office furnishings.  AOS provided Knoll workstations and conference room furniture and KV Workspace provided new Haworth furniture for all of the private offices and the seating throughout the space.

Bart’s Office Furniture handled the move and assembled all of the furniture.

Teague says the former space at Canal Place was more traditional and had a mixture of dark wood antiques and mishmash of typical office furniture.

“We now have more highly functional furniture that’s pleasing to look at and conveys the message of who we are to our visitors and staff,” says Teague. “We truly are the front door and the first thing they see for some businesses when they come to New Orleans.”

GNO, Inc. worked with AOS and KV Workspace for the collection of contemporary Knoll and Haworth furnishings, which are mixed with custom pieces, such as the feature wall and reception desk designed and built by NANO. Several of the credenzas and cabinets throughout the space were designed by NANO and built by Woodward Design + Build.

The 1,500-square-foot boardroom has mobile tables that break down for storage and can be easily organized in any configuration, depending on the type of meeting. The company often lends the space to its partner organizations for retreats and meetings. 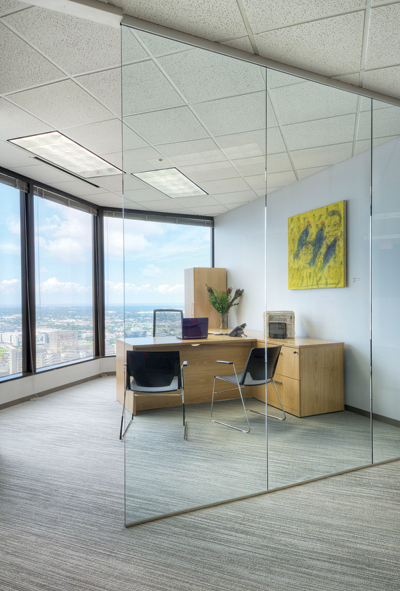 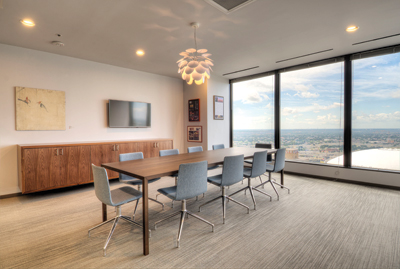 LEFT- Glass walls allow light to filter through the private offices and bring the expansive views to everyone in the company. RIGHT- On a clear day, it’s easy to see Lake Pontchartrain out any of the outer office and meeting room windows.

“It has been a nice thing to be able to do,” says Teague. “To some extent, it’s a community service we provide to the region. We are very proud of our space and happy to share it with others. That gets us a lot of goodwill, too, and it’s the right thing to do.”

The walls are decorated with art from the Ogden Museum of Southern Art, including several pieces by Hunt Slonem, as well as paintings by a host of other local artists such as Becky Fos and James Michalopoulos, with murals from Crystal Clear Imaging.

A casual lounge area outside the large boardroom serves as a breakout space during meetings and retreats. The “Brainstorming Room” down the hall is another casual meeting area with colorful walls, a sofa and sitting ball. In the “Presentation Room,” the atmosphere is slightly more formal. It features neutral colors, white boards and maps of the state and the region by CCI.

In the main open office space, colorful yellow accent walls and orange and red cubbies break up the neutral, light gray walls and carpet with nearly 360-degree views of the city a head turn away.

Teague appreciates open office space and views, but his favorite part remains the location. “It’s nice to be in the middle of the city,” he says, “and feel the energy.”

Main goal: Multiple meeting spaces for staff and community events and meetings, as well as a cohesive design that communicates the mission and message of the company.

Standout Feature: Incredible views of the city, tons of natural light from the glass walls and the open office plan.