Responding to substantial growth in 2014, the Louisiana shipping industry is stepping up its game.

“Ships on the Mississippi River just keep getting bigger and bigger in an effort to save money by transporting more, and larger, loads of cargo at a time.”

During his 2014 State of the Port Address, Port of New Orleans President and CEO Gary LaGrange announced that, for the first eight months of 2014, total general cargo was up 25 percent compared to 2013, totaling 5.89 tons.

This double-digit growth is being widely celebrated, and has also come along with a variety of emerging technologies that are enhancing efficiency and encouraging environmentally friendly operations throughout all aspects of the shipping industry.

“Ships on the Mississippi River just keep getting bigger and bigger in an effort to save money by transporting more, and larger, loads of cargo at a time,” says Jimmy Baldwin, owner/manager of Southern Sails, a company that specializes in custom designing marine transportation and logistics solutions. “The ships are bigger and better and feature advanced automation, which lets them load and unload vessels quicker and more efficiently. They are also being built to be environmentally friendly.”

A sign of the times, Hornbeck Offshore Services, a leading provider of marine transportation services (that reported third-quarter 2014 earnings of $26.6 million) has made significant capital investments in its fleet that will grow from 55 OSVs (offshore service vessel) and 4 MPSVs (multipurpose support vessel) to 68 OSVs and 9 MPSVs by 2016.

These investments are expected to reshape the fleet to further meet customer demand.

“When we launched our most recent new build program back in the fall of 2011, we saw a growing need for larger, more advanced and more capable vessels from our clients,” says Leslie Hellmers, sales analyst for Hornbeck Offshore. “Since our establishment, we have been focused on providing innovative, technologically advanced marine solutions to meet the ever-changing needs of the industry.”

“Several factors, including project location and specifications, led us to build larger vessels on the high-end of the equipment spectrum and upgrade or divest of the low end of our equipment spectrum,” Hellmers says. “In response to the customer community, we have built some of the largest OSVs ever built in the Gulf of Mexico – with deadweight tonnage capacities up to 6,000 tons and liquid mud capacities approaching 20,000 barrels.”

Apart from the new build OSVs, the company recently completed upgrades of six 200 class OSVs to 240 class DP-2 vessels by inserting a 40-foot plug, adding an additional thruster and enhancing the DP capabilities.

Although cargo ships occupy the largest category in regard to the sheer number of vessels that are in operation, the growing trend among new ships is leaning more toward specialization and meeting individual customer needs. Companies are reinvesting in customized ship types, which is mostly visible in the heavy lifting industry and transportation of chemicals. Container ships, once credited for transforming the face of shipping, are now the standard form of conveyance for most forms of manufactured items across the globe.

“The shipping industry has really evolved over the past 10 years, both onshore and offshore. The changes have been remarkable,” says Tony Collins, vice president of Associated Terminals. “Probably the greatest technological advancements are with the cranes that are used to get cargo to and from ships. What is really noteworthy is that the old-school hydraulic cranes with all of the multiple levers and foot pedals have now been replaced with Gottwald crane barges that are controlled with the equivalent of a gaming joystick.”

“It’s like the operator is playing a giant video game, with the joystick controlling the crane’s every movement,” he adds. “Every motion the crane makes can be monitored on computer screens in office. We can see anything, and everything we need to know at the strike of a key on the keyboard. This technology has allowed us to minimize damage and create a better working environment.”

The high-capacity Gottwald crane is the latest in equipment technology. The 360-degree revolving crane is mounted on a pedestal, with boom lengths ranging from 164 to 168 feet set on barges that range in size from 250 to 270 feet long by 72 feet wide and 12 feet deep.  These high-tech cranes can be used for mobile operating in the water and are used to move cargo quickly, safely and efficiently.

“It’s interesting to point out that the new technology gives us the capability to unload ships, depending on the cargo, from both sides of the vessel at the same time.  It is so much more efficient and cost effective,” Collins says. “The industry is using a lot of mobile equipment and automated cranes because damage is minimized and it provides for a better working environment. The automation provides real-time information that allows controllers to quickly pin-point safety issues, fostering a proactive environment.”

“The technology puts a system in place that lets you see the crane activity and cycle time on a computer. You can see everything you need to know on the computer, the entire process is real life,” he adds. “Customers also benefit from the real-time technology because they get the most up-to-the-minute information about their cargo. The computerized improvements are immense and have definitely led to safer operations and improvements in the industry overall.”

Like every aspect of modern life, the shipping industry is focusing more and more on environmental sustainability and as such is investing in new technology. Improvements in the construction of engines and equipment, as well as better propeller performance and high-tech coatings, are being embraced by the industry.

“The trend is moving toward clean shipping solutions and energy sources,” Baldwin says. “Ships are being designed to reduce emissions and increase fuel usage.” 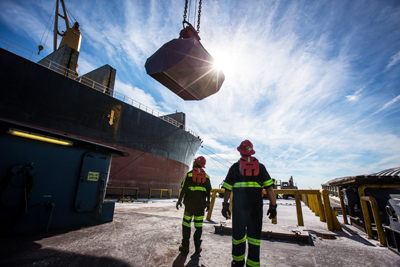 The Port of New Orleans saw a 25 percent increase in total general cargo in the first eight months of 2014, further spurring efforts to increase capacity and efficiency among those in the shipping industry.

“It’s like the operator is playing a giant video game, with the joystick controlling the crane’s every movement…We can see anything and everything we need to know at the strike of a key on the keyboard.” 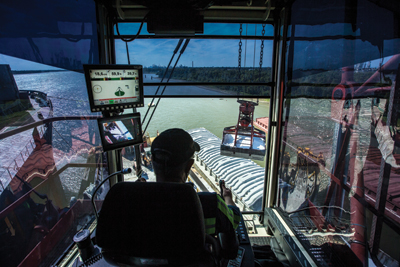 Associated Terminals’ Gottwald crane is a 360-degree revolving crane that replaces the multiple levers and foot pedals present on hydraulic cranes with a simple joystick in order to move cargo quicker, safer and more efficiently.