Get your team out into nature with a hands-on day at this Northshore animal sanctuary.

A rooster’s rousing crow begins each morning at Big Sky Ranch and Retreat in Folsom, Louisiana. The bunnies start nibbling, the horses begin grazing and the cats set off for a day full of adventures — all happy to be alive.

Big Sky is home to health and wellness enthusiasts, entrepreneurs and devoted animal lovers Dr. Catherine Wilbert and Sharon Schluter. The couple shares their bucolic 10-acre sanctuary with more than 250 animals, many of whom have been given another chance at life by these two women.

Joe Sanford, owner of Pelican Pictures, recently produced an award-winning promotional video for the organization. He says he was impressed with the women’s dedication and awe-inspiring kindness.

“They have compassion for every single animal on the ranch and it is clear that each animal is cared for and loved,” he said. “Both women are amazing. Catherine is so brilliant and has a great way of motivating those around her, and Sharon is cut from the same cloth.”

Keeping the Numbers Down

“Every three months a cat can have a litter of five,” says Wilbert. “In eight years, one unspayed cat, her mate and all her offspring could result in 2,072,514 cats.”

Along with the ranch, the couple also manages a 501(c)3 organization called Care, Advocacy and Treatment of Neglected & Indigent Pets — cleverly abbreviated to CATNIP. Its ambitious vision is to see a world with no more need for animal shelters.

“Shelters and sanctuary sites are a necessity today, but they are a reactive solution to a problem of overpopulation, and CATNIP was founded to become a leader in our community and beyond in finding proactive solutions,” Wilbert said. “We can end the need for both euthanasia and shelters by primarily controlling cat populations. We want to stop the problem before it occurs.”

…are looking to spend a day volunteering in the great outdoors.

The farm is home to more than 250 animals, from cats and dogs to donkeys and doves, so there’s always something to do or something to clean up.

The ranch is also a small organic farm, providing volunteers the opportunity to work the land and learn more about organic farming.

…are looking for a unique setting for a retreat, event or activity.

Big Sky Ranch is a great place for corporate events, such as retreats and “Lunch and Learns.” Its peaceful setting is the perfect location to become a better and more productive team.

All proceeds from these events go to support Big Sky Ranch and its CATNIP Foundation.

The nonprofit is currently focused on relief efforts in the wake of hurricanes Harvey and Irma. To support these efforts, the nonprofit encourages the following actions:

Adopt from Big Sky Ranch. Now is the ideal time for these cats to find their forever families. This will also help create space for the pets that will be arriving from the devastated areas.

Big Sky will be caring for many animals for the foreseeable future. They need food, litter, bleach, brooms, mops and volunteers.

Wilbert and Schluter will continue to visit Texas and Florida and they will need to purchase such things as gas and tarps. Please donate to Big Sky’s PayPal page to help.

Currently the Big Ranch’s office is a flurry of activity as staff and volunteers organize their efforts to rescue stranded cats who are in critical stages of distress from the flooding and damage caused by hurricanes Harvey and Irma. The organization is taking part in a national pet-rescue effort with a team of trusted first responders such as Brother Wolf, a no-kill shelter in Asheville, North Carolina.

“I always regretted not being able to help the animals after Katrina,” said Schluter. “Now I can’t sit idle while animals are alone, scared, helpless and in their greatest need. I just can’t.”

Both Wilbert and Schluter have made multiple trips to Texas and Florida to rescue animals. They are also coordinating efforts to transport these rescues to other no-kill shelters throughout the country.

"We can end the need for both euthanasia and shelters by primarily controlling cat populations. We want to stop the problem before it occurs."

The CATNIP Foundation has many innovative outreach programs, such as its Barn Cat Program, which identifies adoptable “working” cats for farms and the Seniors For Seniors program, which pairs senior cats with senior citizens living in assisted living or memory care centers.

“The ultimate impact of this program will not only save the lives of senior animals, but will make a dramatic difference in the lives, health and overall happiness of seniors,” Wilbert says. “Many of these cats that are up for adoption were previously owned by older citizens, so they’re ideal lap cats.”

Wilbert served on numerous non-profit boards and has managed her own successful businesses; she knows that a well-run business needs to be sustainable. A nonprofit cannot survive on grants and donations alone, which is why Big Sky offers seminars, retreats and farm camps for kids and adults.

The nonprofit also caters parties, sells organic fruits and vegetables, and markets handmade gifts. It’s even a sought-after venue for weddings and other social events. Proceeds from all of Big Sky Ranch’s efforts help fund the organization’s mission. 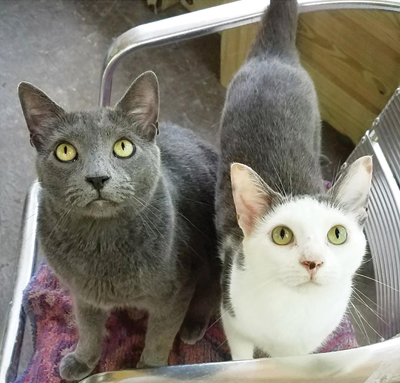 Thanks to Big Sky Ranch, 400 animals were rescued and fixed after the Baton Rouge floods of 2016 and 150 tons of animal food were distributed to 20 rescue organizations and individuals in the affected areas.

Since August 2016, 400 animals have been adopted from the ranch and 500 animals are spayed or neutered through Big Sky Ranch’s low and no-cost spay neuter services as well as its TNR program every year.

Sixty cats, on average, are fixed each month at Big Sky Ranch. Sometimes that figure reaches more than 100 cats in a month. Thanks to Big Sky’s continued efforts and outreach to other animal welfare facilities and government organizations, St. Tammany Parish is already reporting a reduction in intakes and euthanizations.

So far, more than 100 displaced animals have been rescued, cared for and adopted from the ranch’s efforts in the wake of hurricanes Harvey and Irma. In the beginning of October, Wilbert and Schluter reported that Big Sky Ranch was working on assisting animals affected by the Puerto Rico hurricane but that the situation there was “complicated by politics.”

Roxanne was a kitten who swam for days looking for safety during the 2016 Baton Rouge floods. She was a special case because the floodwaters had infected her eye and it needed to be surgically removed. When they put her up for adoption, they thought she would have a hard time finding a home, but a young couple, who had a cat who was blind in one eye, quickly adopted her to be his new best friend.

Ansen was born in a large litter of kittens that was rescued by Big Sky Ranch. As his siblings continued to grow normally; Ansen did not. His legs bowed and he was unable to walk. Big Sky Ranch worked tirelessly to help him. They created tiny splints for his legs and fed him bottles throughout the night. Eventually he recovered and was adopted. Now he’s living in Uptown New Orleans with two other cherished cats.

It took Big Sky Ranch a long time to domesticate Max, a cat found feral in Folsom. One day, a 9-year-old boy came to the ranch looking for a new cat because his beloved cat had recently died. The boy spent time with every cat at the ranch. Then he found Max. For more than an hour he talked and cuddled with the once wild-cat. The two clicked and Max went home with him that very day.

"I always regretted not being able to help the animals after Katrina. Now I can’t sit idle while animals are alone, scared, helpless and in their greatest need. I just can’t." 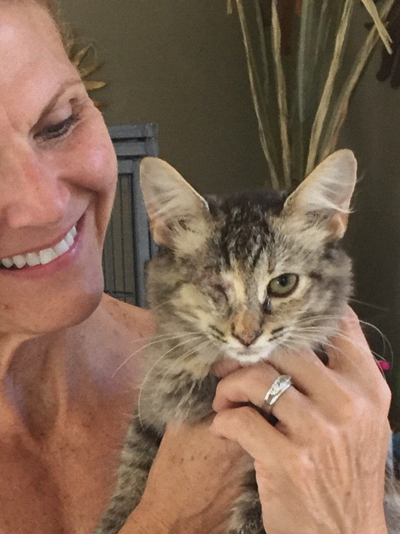 Thanks to Big Sky Ranch, 400 animals were rescued and fixed after the Baton Rouge floods of 2016, including Roxanne.

A big part of Big Ranch is finding homes for all the lovable cats they rescue. Since last year, Big Sky Ranch has adopted more than 400 animals. One thing is certain: it is difficult to walk onto the ranch and leave without taking a sweet cat home with you. Wilbert, Schluter and the cats themselves are pretty persuasive.

Sarah Hugg Centorino, communications strategist with Gambel Communications, discovered that fact soon after her first meeting with her new clients.

“I was in love with everything about the ranch — from the animals to the mission behind the organization,” she said. “One kitten in particular, Ansen, really captured my heart. He had been through a lot but was so full of life and so playful. It took my husband and I about five seconds to decide that he belonged in our family.”

Big Sky is an oasis imbued with tranquility and hope for its many four- legged, feathered and human friends. It consistently sounds a clarion call to the community about the importance of caring for all creatures great and small.

“We must learn to be kinder to our planet,” says Wilbert. “That’s what we are trying to do in our small way.”

Big Sky Ranch CATNIP Foundation is a local nonprofit in St. Tammany Parish with a mission to raise community consciousness about the well-being of people, animals and the planet. Its primary focus is animal rescue and adoption, with a goal of creating a no-kill, no-shelter community.