NEW ORLEANS – With the live music industry essentially out of commission for the foreseeable future, New Orleans bounce rap icon Big Freedia has decided to share another one of her talents with the world. Every Thursday evening, Freedia is hosting a cooking demonstration for a small, socially distant live audience in City Park’s Botanical Gardens. The event – dubbed a “garden cookout” – is streamed to fans worldwide on Freedia’s website and via social media.

“Freedia has always dabbled in the cooking world but we didn’t have a chance to do anything about it until now when she couldn’t play live,” said Reid Martin, Big Freedia’s manager and a co-founder of Midcitizen Entertainment, a New Orleans-based artist management firm that also represents Tank and the Bangas, Sweet Crude and many other local and national acts. “With a lot of our artists, we started live streaming performances on Facebook and Instagram but the thing that caught on with Freedia was when she was in the kitchen and cooking. Fans were loving it.”

Martin said it was a natural next step to create a pandemic-appropriate cooking event to try to make up for all the lost income caused by cancelled gigs. Producers sell no more than 48 $80 tickets for each event. The ticket price includes the show, a meet and greet, a free cocktail and a three-course meal prepared by the Queen of Bounce herself. There’s a merchandise booth for fans who want a keepsake. Rouse’s and Red Bull are already sponsors and Tabasco is coming on board this week. 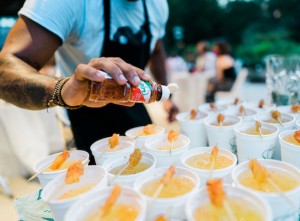 “I’ve got a call with a Abita next week and I had a call with Community Coffee last week,” said Martin. “We’re just trying to add people to it. We are trying to build something here: It’s like a cooking show meets a restaurant meets I don’t know what …”

Freedia prepares the meals ahead of time at a commercial kitchen in Mid-City then arrives at the park at 7 p.m. to get ready for the show. She sits down for hair and makeup then goes out and greets all the guests – with a mask on, of course. Then there’s a cocktail hour and at 8 p.m. the broadcast begins. It’s a five-camera shoot that’s broadcast live on Freedia’s YouTube and Facebook channels to an average of 150,000 viewers. Notably, members of Sweet Crude – the New Orleans-based indie band signed to Verve Records – help run the video production.

“We are sold out until the end of August and we are about to announce the September dates,” said Martin. “This is a real pivot. I have to stress, however, that this is not nearly the kind of money we make when we’re on the road and that we are used to to sustain this entire operation. But this is something we hope that we can keep doing when we’re not on tour even after the pandemic.”