Between a Rock and a Hard Place

A month ago, while working on my column for the November issue of Biz New Orleans, I wrote, “We just can’t seem to stop building hotels.” A week ago, as news of the Hard Rock Hotel collapse began to spread, that thought came back to me as I joined a community mourning the loss of lives and livelihoods.

I watched with fellow citizens as the evacuation zones around Canal Street and Rampart Street widened, and now, have gotten smaller. But they are still there. The cranes that could have collapsed onto nearby historic buildings began to be demolished on Sunday with a dramatic implosion, and they still have to be dismantled. Additionally, the mayor’s office has the primary focus of recovering the bodies of two of the construction workers who died in the collapse. The third worker’s body was recovered a day after the collapse on Oct. 13.

The site was fenced off on Tuesday and NOLA Ready shared the new evacuation zone boundaries and road closures. The intersection of Canal Street and Rampart Street will remain closed for the foreseeable future. The current evacuation zone is bounded by Canal Street, Basin Street, Burgundy Street and both sides of Iberville Street.

The three lives lost and injuries sustained by workers are tragic. I hope investigators keep those people top of mind as they look into the collapse and hold the responsible parties accountable. Then there is the collateral damage — the area businesses in the evacuation zone that remain closed and those on the boundaries that have had closures and reduced business since reopening.

The most visible of those is the Saenger Theatre, located across Rampart Street from the Hard Rock Hotel site at 1111 Canal St. It sustained damage to three windows when the cranes were imploded. I recently wrote about the Saenger and its 2019-2020 season of shows. One of its most anticipated, “Wicked,” was only able to hold a handful of performances before the hotel collapse and the remaining shows were cancelled. If “Wicked” is able to return at a later date, go see it. The production is beautiful.

The Saenger’s website currently starts with a pop-up message: “The Saenger Theatre is under a mandatory evacuation. We are unable to answer our phones and any email responses will be delayed.” Upcoming events are slowly shifting locations. Tonight’s “Peppa Pig Live!” and next week’s “We Will Rock You: The Musical by Queen,” have been moved from the Saenger to the Mahalia Jackson Theater.

In a statement, Saenger Theatre General Manager Sam Voisin said, “We are grateful for the work of the city, first responders and everyone involved in progressing the situation at the Hard Rock Hotel as safely as possible. We are working closely with the city to determine next steps. We look forward to welcoming the community back to the historic Saenger Theatre soon.”

No further details were able to be shared at this time.

Another nearby business was just getting on its feet when the Hard Rock Hotel collapse occurred. Palm&Pine is a new restaurant at 308 N. Rampart St. that offers a menu of inspired dishes that combine Louisiana cuisine with that of Mexico, the Caribbean and Central America.

Palm&Pine had to close for a time due to its proximity to the Hard Rock Hotel. It was able to reopen this past Monday with normal business hours. It didn’t sustain any physical damage, but the negative impact on its business is ongoing. According to a spokesperson, the restaurant lost six of its busiest services in eight days, and two of the four services they did have were on their slowest days of the week.

“The impact to revenue doesn’t end there,” said the spokesperson. “The indefinite closure of the intersection of Canal and Rampart — cutting us off from the CBD and Uptown — and the consequent issues with traffic and parking will create a long-term negative impact to our business. The Saenger closure is another huge blow, as our hours were designed for pre- and post-theatre dining for Saenger events.”

Other businesses outside of the evacuation zone are also feeling the impact. Arrow Café, located at 628 N. Rampart St., had to close on Sunday during the crane implosion. The restaurant has been sharing updates on its social media and suggested a “Rampart Rally” to support open businesses in the vicinity.

The city and the Downtown Development District have created a map of businesses and parking lots bordering the evacuation zone that are currently open. Restaurants, bars, hotels, shops and services are listed in an effort to connect customers with the businesses.

When a tragedy like this occurs, especially in a town that depends on tourism and the service industry, the only thing we can do right now is spend our money with the local businesses able to remain open and support those currently closed as soon as we can.

If you are a business owner or resident impacted by the Hard Rock Hotel collapse, the city is asking you to participate in an online survey. If your business is located within the current evacuation zone, the city asks you call 311 to schedule a required safety check with the New Orleans Fire Department, Louisiana State Fire Marshall’s Office and the Department of Safety and Permits. 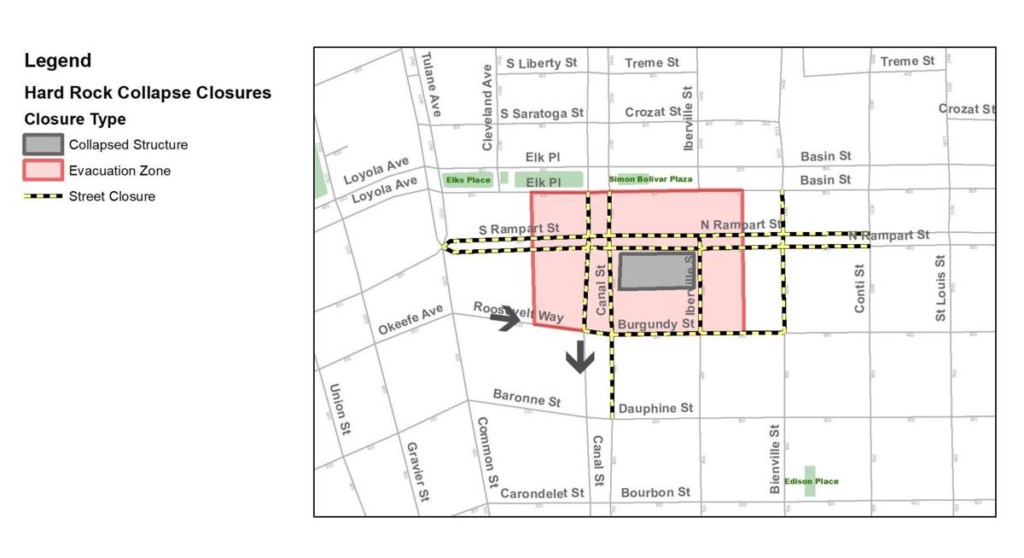