After helping shape New Orleans’ post-Katrina recovery, Bond PR is doing its own rebranding and aims to go national.

One year into a business he built out of a coffee shop, Skipper Bond saw his fledgling public-relations agency turn into a vagabond, displaced by Hurricane Katrina and traversing the country to promote a music festival. One year past the 10-year Katrina anniversary, though, and Bond has never felt more at home — so much so, it feels ready to embrace bigger challenges.

In a marriage between a rising local firm and a national company that’s a proven survivor, Bond Public Relations & Brand Strategy has become Bond Moroch. Moroch, a Dallas-based firm with a nationwide presence, brings 35 years of marketing and communications experience and an impressive client roster to the relationship.

The result, both sides hope, will be a New Orleans agency that can become a national player while holding true to its Crescent City roots at a time when the city itself is entering a post-post-Katrina phase.

Skipper Bond, who founded the company in 2004 after a brief stint in the New York PR world, sees the merger as a win-win for a company that’s become a reunion of family and friends. A year after Katrina, he brought in his sister, Jennifer Bond, to manage the operational side of the business after she’d spent years in Atlanta working for Turner Broadcasting properties. Less than a year later, a friend from New York, Jordan Friedman, with whom he’d worked previously on marketing projects, merged his New York City firm with Bond Public Relations and became a partner. Friedman oversees strategy development and works in the firms highly-regulated spaces.

As Bond has thrived in the post-Katrina boom years, a merger with Moroch seems like the next logical growth step.
Or “inflection point,” as Skipper Bond calls it.

“The term is probably overused, but it’s the next level,” he says, seated with his other partners in the conference room of their second-floor Magazine Street office. “We’ve worked really hard to get to where we are now, and I feel like we’re not starting over, but it’s a new time and new challenges, new opportunities. We’re going to be working harder than ever now.

“This is what our region needs — local firms with national and even global reach. This is how we will build great jobs in Greater New Orleans.” -Michael Hecht, CEO of GNO, Inc.

“I can tell you, we have grown very slowly,” he says. “We’ve had this company for almost 12 years now, and we have grown strategically and, I think, intelligently. We have not grown too fast. I think the 12 years that predated the merger and how we have approached that has set us up for where we are today.”

“We believe that local presence is the key to fully understanding the essence of each client’s wants and needs,” founder Tom Moroch said in an email interview. “Moroch does business in the Gulf Coast marketplace and would like to do more. Having a partner such as Bond situated in the marketplace who knows the DNA of the consumer base, has a track record of successful business experiences and embraces the same values as Moroch, constitutes the chemistry of success.”

One of the keys to that chemistry is to somehow maintain the family atmosphere Bond swears by while creating ties with the new partner. The New Orleans group couldn’t ask for better timing with Moroch celebrating its 35th anniversary this year.

“We brought our entire team to Dallas and had a really fun day integrating with the Moroch team,” says Jennifer Bond. “That was just letting them know that we are growing. There’s going to be change, but there’s more opportunity with that change.” 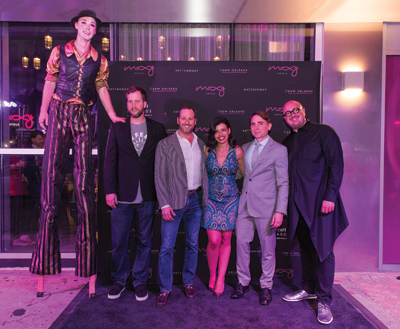 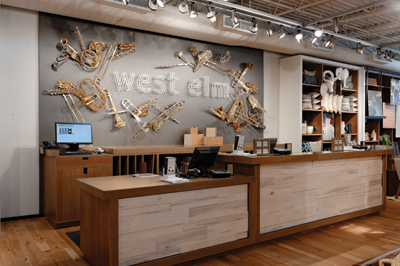 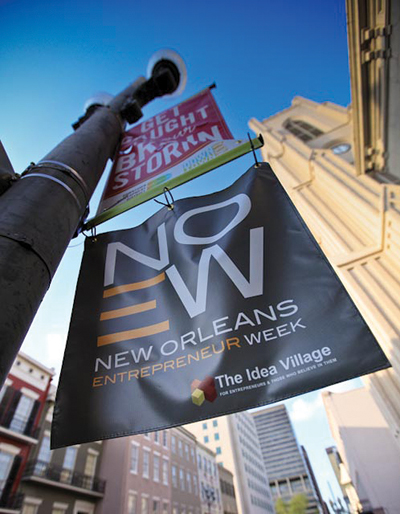 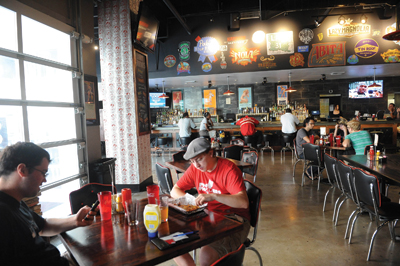 The Bond siblings grew up in New Orleans but got plenty of experience outside the city, Skipper Bond with the prestigious FleishmanHillard in New York City (where he met Friedman) and Jennifer with Turner — where she picked up lots of applicable ideas, from team-building exercises and staff retreats to more comprehensive hiring practices. Skipper attests to a stronger work ethic after long, grueling hours in New York before returning to New Orleans to set up his own shop.

That stamina served him well in those early days after Katrina, in which his company subsisted on a collaboration with another agency with Southern Comfort (including its circuit of music festivals) as well as providing communications support on FEMA-related housing work thanks to a New York connection.

Along the way, they continued to gain exposure and attention. Skipper Bond joined the advisory board for the New Orleans Jazz & Heritage Foundation. In 2009, they secured a feature story on New Orleans on the cover of Entrepreneur magazine. They picked up local clients such as the venerable local brands Camellia Brand and PJ’s Coffee, as well as the upstart NOLA Brewery, while working closely with the burgeoning Louisiana filmmaking industry. They helped Brooklyn-based home furnishing company West Elm open stores across the country (including New Orleans), and worked with Williams-Sonoma to launch an Atlanta store.

Six years later, they were ready for a new chapter. And they knew an opportunity when they saw one.

“While it was a smaller market than, let’s say, New York, there just was definitely capacity for additional marketing players down here,” says Friedman. “It was a good time to jump in.”

One of the keys to the company’s success also could help provide a smooth path for its future in its work with Greater New Orleans Inc., which promotes business development across 10 southeast Louisiana parishes. This kind of partnership not only has helped connect Bond with local businesses (and, basically, like-minded entrepreneurs), but also can help the newly merged company stay plugged into the local scene. 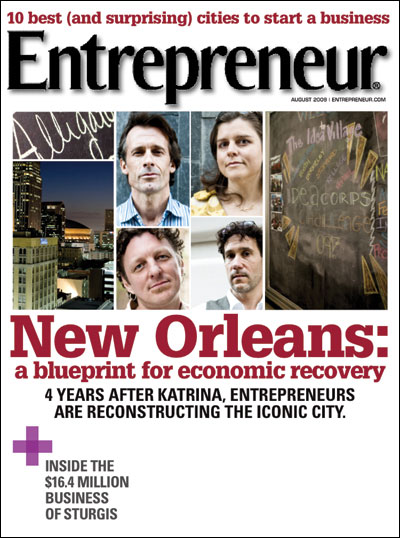 Even with Bond going national, GNO Inc., President and CEO, Michael Hecht, couldn’t be happier. He praises a five-year partnership that has helped elevate the perception of his organization and testifies to Bond’s appreciation of both GNO, Inc. and the southeast Louisiana economy. Hecht was particularly impressed with Bond’s work during the Katrina 10th-anniversary campaign.

“What could have been a very challenging commemoration for Greater New Orleans was managed into a deeply successful messaging platform,” Hecht said in an email interview. “Through a number of modalities — earned media, social media, TEDx events — we were able to tell the world a story that was honest but optimistic, about a region that had not just come back from the devastation of Hurricane Katrina, but was in many ways better than ever. … We controlled our own message by providing the global media with diverse, honest, compelling content – and the result was that our story was told.

“I think that Bond Moroch now has the scale, ability and energy to be not only a premier firm in the New Orleans market, but across the Gulf South and even nationally,” Hecht continued. “And this is what our region needs — local firms with national and even global reach. This is how we will build great jobs in Greater New Orleans.”

In Skipper Bond’s mind, the merger with Moroch — aided by a long friendship with Moroch executive Hunter — represents an opportunity to grow into a full-service agency that can handle clients across the country, and on a larger scale.

“This is what our region needs — local firms with national and even global reach. This is how we will build great jobs in Greater New Orleans.” -Michael Hecht, CEO of GNO, Inc.

In an increasingly competitive atmosphere, the study suggests, clients are getting fidgety and less loyal as they seek out potentially more agencies — meaning either a smaller piece of the pie or no piece at all.

Skipper Bond emphasizes modest growth, which he believes will keep the company focused on its strengths, something that appears to have paid off in a recent campaign for the launch of Marriott’s hip Moxy Hotel in the Central Business District. The campaign included a strong social-media strategy, inviting key influencers and bloggers, and staging a “freak show”-themed opening party complete with circus arts performers. The result was a packed house and significant social-media traffic.

“We were targeting millennial-minded consumers,” Jennifer Bond says. “They’re online, so social was huge a part of our strategy, especially Instagram. Even on the media front, we were really tapping into bloggers and social influencers, online influencers as part of our campaign. (The hotel was) sold out in May through July, (and) summer is typically a slow time for tourism in New Orleans. Social-media traffic was up by 600 percent on Instagram, so it was a really great case study for us, and just a fun brand to work with.”
In Bond’s partners’ minds, the core mission won’t change.

One of the keys to this transition is Hunter, who came over from Moroch before the merger, in November 2015. Hunter’s main client was also Moroch’s original client: McDonald’s. (He’s brand loyal; while we discussed coffee options as we sat down to chat, he insisted McDonald’s coffee is one of his favorites.) 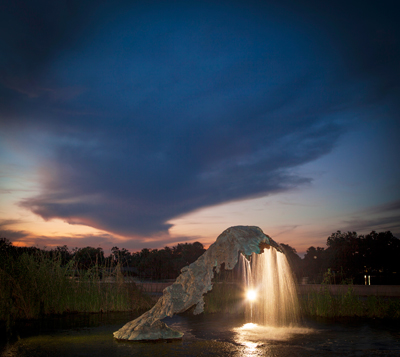 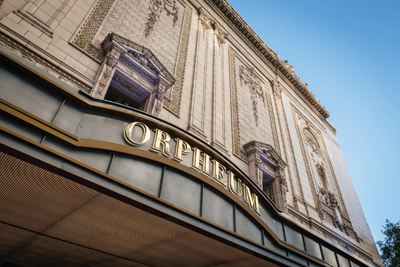 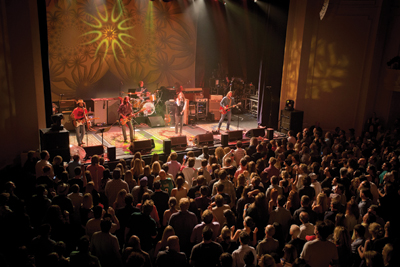 “We’re helping establish NOLA as a true center for the arts,” says Skipper Bond. Shown here are Bond Moroch clients, local artist Lynda Benglis (top left- her sculpture, “The Wave”) and the Orpheum and Civic theaters, both relaunched with the firm.

Hunter, who also sits on the board of the New Orleans Film Society, believes the merger is a logical progression.

“It’s really about letting those who have built the companies and the relationships in the markets continue to do what they do, just providing the bit of backbone that makes their jobs easier or more efficient or broadens the opportunity to sell the scope in a broader way,” he says.

Hunter has watched Moroch grow into a company that boasts 31 offices (Bond had three) generating $500 million worth of billings. The key to a company’s smart growth? Not taking on debt, he replied.

“If you were to grow 31 offices, that’s a huge overhead growth, right? You don’t have the clients to sustain that, (so) you take on debt,” he explains. “Then you’re in a hole. I think the most important thing in our business is to understand that we sell ideas. We sell creative product … so maintaining financial disciplines in our business, to make sure that the client’s getting the best end result for the most efficient price is the core of … our business.”

As the team reflects on what Skipper Bond calls the company’s “inflection point,” they remember that they’re literally not far from the Magazine Street coffee shop that served as their first home.

“At the core, we’re always New Orleans,” Jennifer Bond insists. “As we grow nationally, we will not forget about this city. This is our home.”

Some of Bond Moroch’s past and present clients include

• George Rodrigue Foundation of the Arts