Backing Those Who Back Business in Jefferson Parish

Over the years, the Jefferson Chamber Political Action Committee has endorsed local and state candidates that share a pro-business vision for the region.

Since its inception 25 years ago, the Jefferson Parish Chamber of Commerce has advocated for pro-business policies that promote and protect free enterprise.

And while that idealistic mission is shared amongst all Chamber members, actually passing and implementing those pro-business policies is nearly impossible if the people in power—namely local and state politicians—are not like-minded and don’t hold those same beliefs and ambitions.

Knowing that, the Chamber established the Jefferson Chamber Political Action Committee (Jefferson Chamber PAC), an independent, not-for-profit enterprise that endorses and supports parish and state political candidates who will parallel or complement the mission of the Chamber once elected into office. That includes school board races, parish council races, judicial races and state legislative races.

“Our PAC has been very diligent and very mature in the way it endorses,” said PAC board of directors member Todd Murphy of Raymond James Financial Services. “We aren’t endorsing just based on the fact that you’re an incumbent or that early polling hints that you’ll win the race. Of course, we want to win the race, but if we have an incumbent that’s not really working with us (and of course, we aren’t going to agree all the time) then we won’t hesitate to back the other side.”

Murphy continued, “Second, our parish is obviously divided by a river­—which isn’t ideal for a community because you have the natural ‘that’ side versus ‘this’ side issues. And we’ve been very good at not looking whether a candidate comes from the Eastbank or Westbank but rather what they plan to do for the entire parish.” 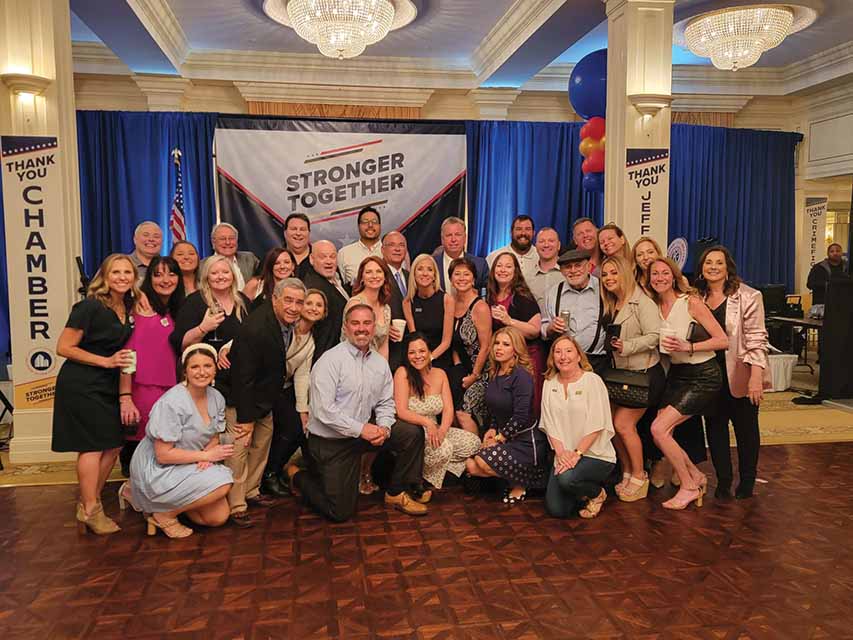 Traditionally, incumbents seeking re-election or challengers beginning their campaigns will give a presentation or just speak in front of the PAC’s board of directors, explaining why the organization should endorse their candidacy.

With that said, the Chamber will occasionally take a proactive approach and solicit local business leaders to run for office. Oftentimes, those candidates have a pre-existing relationship with the Chamber—many come from the organization’s Leadership or Young Professionals Programs.

“One hundred percent of the PAC’s endorsed candidates in the City of Kenner and City of Harahan municipal elections, as well as the Jefferson Parish School Board, were elected to their respective posts,” Jefferson Chamber President Ruth Lawson said. “The PAC experienced tremendous success and witnessed its influence expand to greater heights in 2022.”

“Some of the issues that we’ve worked on in the past have been things like lower car insurance, a cost that affects employees and employers,” Murphy said. “When we examined the issue, we saw that some of these antiquated laws that were still on the books and unique to Louisiana were the culprit. So changing those things, which made the system more conducive to equitable rates, was an issue that the Chamber ID’d as pro-business.”

Murphy also said that transportation was another issue the Chamber has championed. “A couple years ago, we didn’t have Uber and Lyft in Jefferson Parish as a means for people to earn income and use that service to get to and from work, if needed,” Murphy said. “We worked to bring that in where it could be regulated fairly, and regulated fairly statewide.”

Candidates who earn an endorsement from the Jefferson Chamber PAC are able to use the organization’s logo and branding on websites and social media. The PAC will often times also air radio or TV spots, directing listeners and viewers to go to the PAC’s website to see a list of endorsed candidates.

“You know, in Jefferson it seems like there’s a race every six months or so,” Murphy said. “So it really depends on the specific race on what the level of involvement of the PAC will be. But whatever that involvement is, whether it’s campaigning on media outlets, or polling, or mailings, that’s not something we expect the candidate to pay for. That’s money we raise and we put back on the street to help these folks get elected.”