Back to the City

New Orleans is part of a national wave of residents opting for urban life. 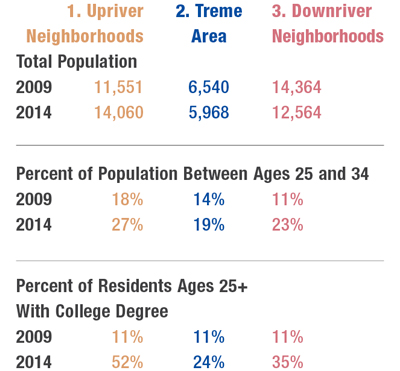 In 1925 Ernest Burgess, an urban sociologist from the University of Chicago, published a seminal theory of the development of American cities. His premise was that cities consisted essentially of concentric zones: first a downtown loop, then a more industrial area, then areas predominantly composed of working-class housing, and finally the suburbs inhabited by wealthier residents.

Over time as a city’s population grew, these zones would essentially “invade” each other and progressively push the city’s footprint—and its most “desirable” areas—further and further outward.

Although highly oversimplified, Burgess’ insights were largely validated in the 20th-century American urban landscape and its familiar lexicon: suburban sprawl, auto-centricity, “white flight” and the like.

The past 20 years, however, have confounded some long-standing conventions about American cities, since in almost every metropolitan area, neighborhoods in or near urban cores are experiencing conspicuous revivals. These revivals have not supplanted suburban growth by any means, but they have directed a great deal of investment and cachet into areas long regarded as past their prime.

Neighborhoods near downtowns in many cities, which for decades had been sleepy or seedy after business hours, are now increasingly among their regions’ most desired, especially for younger residents.  Study after study has observed this trend with empirical and emphatic data.

This “back to the city” movement has several explanations—including consumer preferences, federal housing policy, largely decreasing crime rates, the effects of the great recession and others—that scholars of economics and urban development continue to examine. In New Orleans, these dynamics are further complicated by the disruptive effects of Hurricane Katrina. But some of our inner-city neighborhoods provide dramatic examples of these recent national trends.

The most obvious changes have been in the Central Business and Warehouse districts downtown. In 2000, the population of these neighborhoods was 2,626. By 2010, they were home to 3,460 residents, and the most recent estimates indicate that their combined population in 2015 was 6,337. In other words, the population has nearly tripled in 15 years and has grown by over 80 percent in the past five years alone. Scores of new apartments and condominiums have come online, and many more are in the pipeline.

Even without significant population growth, however, many of New Orleans’ historic neighborhoods have experienced a significant transition in recent years. I examined data from the U.S. Census Bureau to explore these changes in three popular areas of the city: the “sliver by the river” upriver from the CBD (neighborhoods like the Irish Channel, and East and West Riverside), Treme and its surroundings, and the neighborhoods downriver from the French Quarter (including Bywater, St. Claude and Holy Cross). The results were instructive and unmistakable: Younger, generally well-educated residents with disposable income have chosen to take root in these transitional neighborhoods at far greater rates than before.

Although the population of these areas in 2009 and 2014 were nearly identical, the composition of their residents had changed dramatically. For example, in 2009, only 14 percent of residents were between ages 25 and 34. By 2014 residents in this age group comprised 24 percent of the population. In 2009, 30 percent of households earned $50,000 or more. By 2014 this percentage had risen to 38 percent, and the poverty rates fell from 32 percent to 26 percent. And most dramatically, the percentage of residents over the age of 25 in these neighborhoods who had earned a bachelor’s degree or higher rose from 11 percent to 40 percent.

This analysis is, of course, a mere snapshot from a diverse and complex set of demographic and economic changes in our region. But it is important for local and regional leaders to understand that trends like these represent a very real and likely very important shift in the urban landscape, one in which certain residents are attracted to life in the urban center in much greater proportions than had been conventional for nearly a century.

Next month, we will take a closer look at some potential opportunities and challenges associated with this shift, both nationally and regionally.