Creates His Own Bow Ties

Austin Glass has a collection with a twist. The handsome former Coast Guard officer is known for his bow ties, yet you would never guess that he makes each one. Yes, that means he finds the material he likes, cuts out the pattern and sits down at the family sewing machine to stitch up each bow tie.

While this is not something you may expect from a graduate of Florida State University and the Officers Candidate School at the United States Coast Guard Academy in New London, Connecticut, he is quick to point out that it was his wife, Jessica, who pushed his style away from the flip-flops, cargo shorts and Hawaiian shirts – his usual dress growing up in Tallahassee, Florida – to the fashionable suits, dress shirts and bow ties he often wears today. He also credits “a few male influences in my life with a keen fashion sense” for helping to shape his style and draw him out of his comfort zone.

“I only stepped into the realm of wearing bow ties within the past couple of years; I never considered wearing them before moving to New Orleans and getting connected with great friends who became like family to me,” Glass says. “The late interior desi

gner Chet Pourciau opened my eyes to the versatility of bow ties.”

Glass came to New Orleans as a Coast Guard officer. “I was stationed at the Eighth Coast Guard District Headquarters assigned to the Waterways Management Division in the Hale Boggs Federal Building off Poydras Street,” he says. 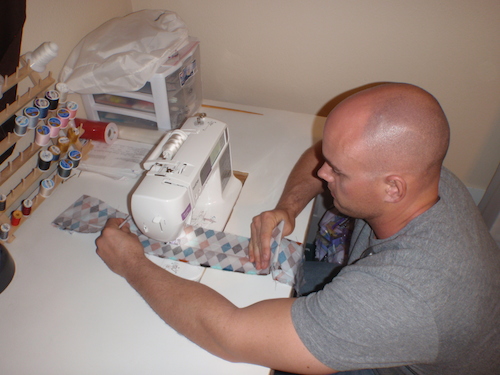 “After two years there, I was assigned to Morgan City in the Outer Continental Shelf Division doing offshore inspections in the oilfield. While living in New Orleans we fell in love with the city, so when I decided to leave the Coast Guard, we decided to move back closer to the city. Today we live in Luling and my wife teaches math at Destrehan High School.”

ying top-dollar for bow ties,” he says. “It really came down to knowing I could make them for a fraction of what they cost in the stores.” His mother taught him basic sewing techniques when he was growing up. “I've always enjoyed making things myself, so I set 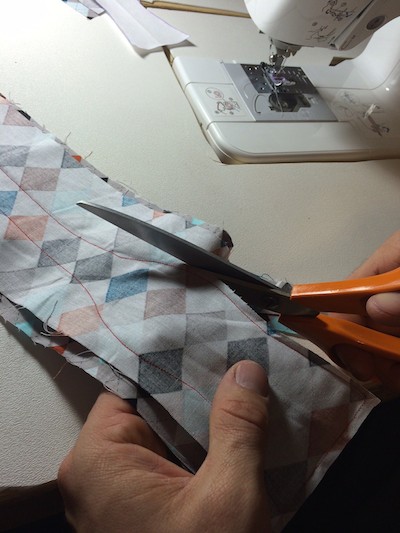 out to learn how to make my own bow ties.”

Glass had a little help from the magic of YouTube. “My wife says I learn most of the things I do from YouTube, but I also know my family laid a lot of the foundations for what I know today,” he says. “My dad and grandfather taught me a lot of mechanical knowledge, including how to work on cars and machinery, carpentry, electrical, etc. My mother rounded off my artistic side with arts and crafts, cooking, sewing and many other activities. I'm very thankful that they always gave me the opportunity to learn and never pushed me in a specific direction.”

Does he find the process of making a bow tie complicated? “No, it is relatively easy,” he says. “However, I could see how it could be daunting if I didn't have any experience with a sewing machine,” Then he smiles and adds, “I had to teach my wife how to use the machine when we first bought it.”

Glass explains that he will generally only use cotton or some kind of cotton blend for his bow ties. “The fabric is easy to work with and the finished product ties well,” he says. “I can get a few bow ties out of a half yard of fabric. I typically buy my fabric from the big craft stores. There are a few specialty fabric shops around town that I have shopped at as well.” Glass’ signature style is to have some of his bow ties monogrammed. “It adds a personalized touch that you don’t find everywhere,” he says with pride. 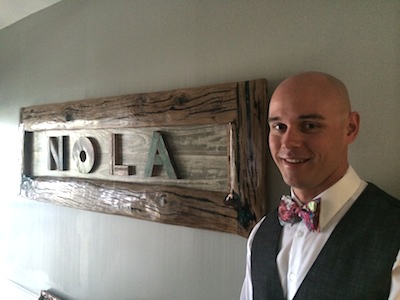 Now a marine surveyor with Rivers and Gulf Marine Surveyors in Harvey, Glass conducts safety surveys and financial evaluations of large oilfield vessels and barges for banks and insurance companies. “Obviously, I don’t dress up for work,” he says. “Most days I am covered in grease and oil, crawling around an engine room or throughout a barge in either coveralls or jeans and a t-shirt, so I enjoy dressing up on occasion and adding my signature bow ties as my final touch for my personal style.”