At Hogs for the Cause, Cash Isn’t King. Here’s Why.

NEW ORLEANS – For the second year in a row, Hogs for the Cause will be a cashless event. Guests can quickly pay for food and drinks with the simple tap of a wristband that acts as both a ticket into the sprawling BBQ festival, and a digital wallet of sorts.

“In the past, we had been using a wooden token system, and it was great for what it was, but that can be only used in limited capacity,” said Becker Hall, the CEO of Hogs for the Cause. “Because of the growth of the festival, we had to find a cash management system that would allow more efficient processing and a better experience for our consumers and our teams.”

Here’s how it works: You can either purchase your ticket/wristband onsite and load it with funds at one of several top-off stations throughout the festival grounds; purchase it online and add funds at that point; or stop by Swap Night, exchange your ticket for a wristband, and skip the lines at the box office.

Swap Night, which happens tomorrow, Wednesday, March 27, at 4 p.m. at Urban South Brewery (1645 Tchoupitoulas St.), kicks off the Hogs for the Cause festivities.

Although the wristbands have proven to be a success, Hall was nervous that they wouldn’t appeal to guests who are hesitant about trying new technology. But he received a vote of confidence from an unexpected source – his 80-year-old father.

“Last year my father, who’s a very late adopter to any technology, came up to me and said, ‘These are wonderful. These are the best things I've ever used’,” Hall explained. “And I said, ‘We're going to be okay if (he) can handle the wristbands.’ And it turned out to be a simple and smooth experience.”

The wristbands didn’t necessarily lead to an increase in profits, but they helped the organizers keep track of the funds raised during the event.

“Once any transaction is made, it goes straight into the system. We could see everything, the second that it happens,” said Hall. "Whereas in the past, when you were trading change, dollars or credit cards for Hoggy Dollars, we wouldn't have a clue until maybe even days later … With RFID technology, you can diagnose any problems almost immediately.”

The wristband technology has also enabled the organizers to examine the festgoers’ “purchase patterns” and bring back some of the popular food and beverage options from last year.

“We have nearly one hundred teams out there, and they're serving anywhere from one to 20 dishes,” said Hall. “You can see what kinds of foods are selling in what denominations. And what price point the patrons like to pay.”

Event organizers can then let the teams know what the customers want, which is a win-win for everyone.

“That’s monumental when you're trying to grow. Having that data in our back pocket has been a massive gain for us,” said Hall.

Hogs for the Cause operates as the premier funding source for pediatric brain cancer outreach services in the United States. They’ve given grants to over 750 families in need, and have made financial contributions to children's hospitals in New Orleans, South Carolina and Atlanta – including $2.1 million to Children’s Hospital New Orleans for their Hogs House. 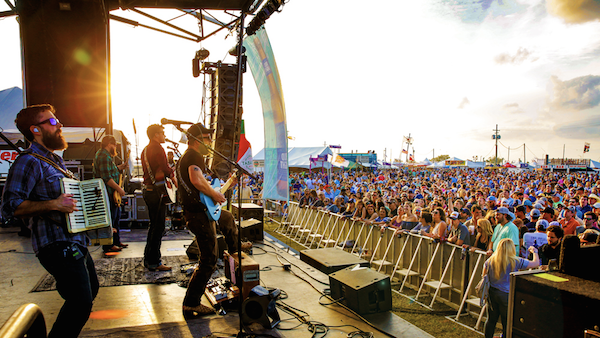 Implementing the wristbands has come with challenges, however.

Since Hall orders the inventory six months in advance, he has to predict how many wristbands he’ll need. If he overshoots, he’s left with “expensive inventory that can’t be used year after year.”

In 2018, the festival sold out of tickets on both Friday and Saturday.

“People were wondering, “How does a festival at a 20-acre lot sell out?’ It was due to the fact that we forecasted 30% to 50% growth and we achieved it. We didn't think we were going to hit those numbers. So we upped the inventory (for this year’s event) substantially,” he said.

“There is still the threat of selling out, because we reach a point where we can only feed so many people and give them the experience that we want to give our customers,” he added. “'Unlimited' is not a great thing when it comes to your experience. We want to make sure that everybody can get in, have a wonderful full time, and not feel crammed. And we want to make sure there's enough food and drink for everybody.”

For additional Hogs for the Cause time and ticket details, visit: https://hogsforthecause.org/tickets/