NEW ORLEANS — During a speech at the Dec. 14 New Orleans Chamber annual meeting, Lt. Gov. Billy Nungesser — who leads the state’s Department of Culture, Recreation & Tourism — talked about the tourism industry’s recovery from the pandemic and highlighted innovative promotions that he said have sped up the process. Nungesser was a last-minute replacement at the event for Gov. John Bel Edwards, who had to change plans because of the extreme weather throughout the state.

“Prior to COVID, we had five record-breaking years in tourism,” Nungesser told the crowd of local business leaders. “In 2019, over 53 million people visited Louisiana. They left behind $1.9 billion in taxes. That’s over $1,100 per Louisiana family that you and I didn’t have to pay. Now COVID set this way back, but the innovative people around the state in tourism didn’t just wait around. They did things like mailing a Sazerac to every tour operator in Canada — and then we taught them how to fix that drink.” 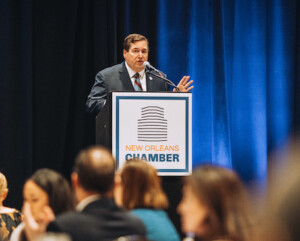 During a Dec. 14 speech, Lt. Gov. Billy Nungesser talked about the tourism industry’s recovery from the pandemic. (Photo: Anthony LaMothe)

Nungesser said efforts like that helped bring the 2021 numbers back up to 41 million visitors — and he thinks the state will break records again soon. One marketing campaign he’s particularly proud of involves building Louisiana floats for the Macy’s Thanksgiving Day parade and the Rose Bowl parade. The state struck a $1.4 million, three-year deal with the department store, and each Rose Parade float will cost about $350,000 to build, but Nungesser said the earned advertising from both endeavors far exceeds those expenses.

“I went to the Macy’s parade last year, and I remember standing in Times Square during the week leading up to the event and watching this giant alligator eye [on the big screen],” he said. “Everybody stopped and started pointing up. And after it zoomed out, everybody read, ‘Get ready New York; Louisiana’s coming.’ It was incredible exposure; I think we got $75 million exposure for a $1.3 million investment over three years. And we’ve still got a year left to go.”

The success of that partnership inspired Nungesser to pitch the organizers of the Rose Parade as well. He and his team flew to Pasadena to do it in person.

“I said that Louisiana has been hit with two hurricanes two years in a row on top of COVID and we could really use a shot in the arm — no pun intended,” he said. 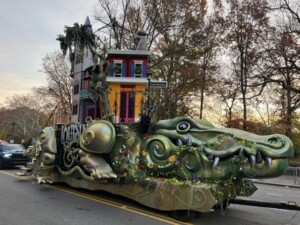 Louisiana’s 60-foot-long ‘Celebration Gator’ is the longest float in the Macy’s Thanksgiving Day parade. (Photo courtesy of the Department of Culture, Recreation & Tourism)

He said his team’s passion for Louisiana led to the debut of the “Feed Your Soul” float at that event in January 2022. It won awards for floral design and entertainment. Now, the float for the 2023 Rose Parade is under construction.

“If you want to make a trip of a lifetime, we got over 100 Louisianians signed up to come out and help us decorate it,” said Nungesser. “In three days, we put over 34,000 roses on the float, and it’s not too late to sign up for this year.”

Nungesser said some of the parades’ potent promotional power can be attributed to good luck.

“In all of these parades we make sure we have a great Louisiana ambassador,” he said. “And last year, when we put John Batiste [on the Macy’s float], people said, ‘Well, he’s not well known.’ Six weeks later he’s nominated and wins all these Grammys. This year, when booked Lainey Wilson for the Rose Parade, they said the same thing. Then she wins female vocalist of the year [and several other awards] at the CMAs. She’s stealing in the show and she’s gonna be out there entertaining.”

In other business at the meeting, Mindy Nuñez Airhart closed the book on her tenure as the chamber’s executive committee chairwoman. Todd Matherne, CEO of Renaissance Publishing (owner of Biz New Orleans), is assuming the leadership role for 2023.

Air Travel Across US Thrown into Chaos After Computer Outage