For local families with a child battling a life-threatening disease, Angels’ Place is there to provide help in any way possible.

The organization also helps with a family’s last-minute or miscellaneous needs, which can include things like WalMart cards, gas cards and even Visa cards to cover an insurance copayment. Seen on the right is Executive Director Mark Firmin.

On four ordinary dry-erase boards hung on the walls of a basic conference room at Angels’ Place are listed the names of 83 children. All have life-threating diseases: cancer, leukemia, brain tumors, heart defects or neurological conditions. But in this uninspiring Metairie office building, inspiring miracles seem to happen on an almost daily basis.

Angels’ Place’s ongoing mission is children’s respite service. The fight to preserve a child’s life is a tough one, so the organization’s volunteers are there to lend a hand. Staff and trained respite volunteers watch over Angels’ Place children at the hospital and provide household aid to families — all free of charge.

“When a child is diagnosed, it turns the lives of the entire family upside down and we try to help them deal with that situation,” says Mark Firmin, executive director of Angels’ Place. “We support children and their families with their journey and help cover some simple things so that they don’t have to worry about them. That way the family can focus on the care of their sick child.”

The organization works with children admitted to Children’s Hospital New Orleans or Ochsner Health System and it offers services to any child in Louisiana or Southern Mississippi.

“They come to New Orleans because they don’t have critical care in the Biloxi/Gulfport area,” says Firmin. “We couldn’t turn them down. I mean, how could we?”

Angels’ Place was founded in 1997 by Anita Gilford. While her own son was in treatment for cancer, Gilford found that there were few places her family could turn to for help. Having personal experience with this lack of support, she promised to dedicate her life to helping seriously ill children and their families. Her son won his fight against cancer and is now living a normal life. Gilford fulfilled her promise by creating Angels’Place. Upon retiring in 2015, Gilford passed control of the organization to Mark Firmin.

“At times, caregivers, rather than talking to a doctor or nurse, just want to talk to someone else,” says Firmin. “One of my first cases was a young girl from Mississippi, who had all kinds of things wrong with her. One evening I just sat down with this child’s mother and talked with her for four hours. Sometimes, just having a shoulder to lean on can make a difference.”

The organization also helps with a family’s last-minute or miscellaneous needs, which can include things like WalMart cards, gas cards and even Visa cards to cover an insurance copayment. Angels’ Place assesses each family’s needs and resourcefully goes about fulfilling them.

One such family is the Oko family from Nigeria. Philip Oko, the second of five children, was diagnosed with leukemia on September 9, 2015. He was given a 1 in 9 chance of surviving.

“It was my darkest day,” says his mother, Veronica Oko. “It was a big blow below the belt. He was always so healthy. We had just sent him to boarding school, which in Nigeria is a joyous time to celebrate a child’s independence. He returned home after his first midterm break and began fainting.”

When they received the diagnosis, the family knew big changes to life had to happen; Nigeria simply did not have the medicine, medical facilities or doctors to handle Philip’s cancer. While some of the family had to stay home, Veronica, Philip and his 1-year-old sister traveled to America for the care Philip needed.

After spending $7,500 on airfare, Oko spent another $20,000 traveling to seven different treatments centers, and she says she was turned down by all, including St. Jude Children’s Research Hospital and Anderson Cancer Center. Finally, blind and given just hours to live, Philip was accepted into a program at Children’s Hospital New Orleans.

“I had spent so many sleepless nights and stressful days,” says Oko. “And on one of our first nights [at Children’s Hospital New Orleans], the people from Angels’ Place came and said, ‘We will watch over Philip, and we will watch over your daughter. Go take a walk. Have a fresh breath of air. Get some rest.’ They instantly alleviated a bit of my suffering and I was so thankful.”

Angels’ Place also found a way to get Oko a used van.

“At one time during her struggles, she was walking every day from her residence in New Orleans East to Children’s with her son on her back,” says Firmin.

Philip is now cancer-free but under close supervision. In another year, the doctors will take out the ports in his brain and heart, which can provide medication when and if needed.

“If a family is accepted as a client family, they have access to our respite service and other types of support at no charge,” says Mary Kantlehner, Angels’ Place children’s program director. “Respite service volunteers generally visit children in the hospital to help make sure they get the attention they need. Families may also benefit from our charity drives and receive help from our staff in applying for other assistance programs.”

Additionally, Angels’ Place provides support to families throughout the year by hosting events such as the Spring Fling, Art for Angels and Halloween Booville.

The largest of these events is Angels’ Place’s annual Christmas gift drive for all of the children of client families. With the help of hundreds of volunteers and donors, they give Santa a hand in making sure every Angels’ Place family gets a little Christmas cheer, especially if one of the kids will have to spend the holidays in the hospital.

Meredith Long-Dieth is the director of performing arts at St. Martin’s Episcopal School and volunteers with Angels’ Place.

“I volunteer my face-painting skills when they need it for special events,” she says. “It is so rewarding to get a smile on a child’s face. Sometimes I get my theater students to volunteer at the events too. My niece is in remission from a rare brain cancer. I can’t tell you how much programs like these helped her and her family. From meals to family events, Angels’ Place gives so much respite to families.”

Oko says the organization’s name says it all.

“There are angels walking without wings here,” she says. “It’s a heavenly experience, with so many people acting selflessly as they synchronize care and love. Cancer was happening and I was ignoring my other kids, they were forgotten. It’s not that I didn’t love them, it was just, ‘How do I juggle it all?’ I know they felt slighted. They were saying, ‘Maybe if I had cancer you would pay attention to me, too. It broke my heart. So, spreading the attention and gifts to Philip’s siblings helped each one of my children to feel cared for and special.”

“Mark Firmin and his team work tirelessly to help sick children and their families find some semblance of normalcy during an extraordinarily difficult time,” says Lisa Oretu, an Angels’ Place board member. “Whether hosting a trick-or-treat party for immune-compromised children or coordinating respite care for an exhausted caregiver, Angels’ Place strives to create memorable moments for families and their chronically ill children so that they can keep up the fight to beat cancer, beat lupus, or whatever chronic illness they are fighting.” Louisiana Department of Education holds standardized testing and classrooms with children who aren’t testing are required to be silent. The result is that many seek field trip options. During this time, Gray says the organization conducts multiple tours and see as many as 100 students a day.

Mission
The mission of Angels’ Place is to provide ongoing respite care and support services to a child with a life-threatening disease and their family in a loving caring manner.

Major Fundraising Event
Angels’ Place 3rd Annual Party with the Angels will be held on Friday, September 27 at Magnolia Plantation in Jefferson from 7 p.m. to 11 p.m. Tickets are $60. The event will feature a patron party, several raffles and auctions. 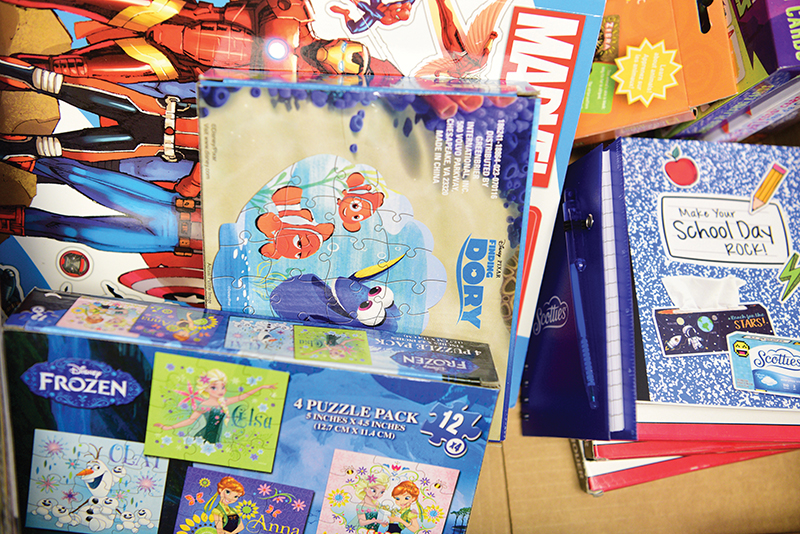 The Success of Services

85
clients are currently being served

1,200
service hours per year are offered by volunteers

Hundreds
of tickets to the Saints, Pelicans, local theater productions, and Jazz Fest are annually distributed

A Good Match
FOR COMPANIES WHO CAN…
Donate gift cards or make in-kind donations, host events that raise awareness of Angels’ Place’s mission and special events, adopt a family for Christmas, adopt a family for a month, a year, or until the child is cured and/or volunteer time