Andrew Gerber was getting a new haircut. “This is how I want it to look,” he told Chris at Driigh Revival Salon on Erato Street in the Lower Garden District,” showing him a photo of a hairstyle he found online. The sleek haircut with a part on the side and neatly combed back was indeed different from the somewhat casual ‘shake-and-go’ hairstyle he had been wearing. But then, Andrew is a 13-year-old who knows his mind. He is fashion conscious and very careful to look his best whether he is playing his trumpet, skateboarding and making videos of being a middle-school pupil.

An eighth grade student at the International School of Louisiana, where he studies in French immersion, Andrew hopes to attend the New Orleans Center for Creative Arts (NOCCA) next year for Media Arts, even though he excels at the trumpet and has been taking lessons since he was seven years old from well-known trumpeter Shamarr Allen, whom he first met at “Silence is Violence,” a program that sponsors music lessons for kids.

Andrew has already observed that some musicians have a definite fashion style, and he doesn’t intend to be a slouch. Having performed at several Jazz Fests, the Mahalia Jackson Theater and French Quarter Fest, he currently takes private piano lessons with Dr. Hristo Birbochukov, who teaches at NOCCA, and he recently started attending the Heritage School of Music.

Born in Covington, he has lived with Cheryl Gerber and Mark McGrain, his aunt and uncle, since he was three years old. “The great thing about my life is I really have the best of both worlds,” he says. “I live in a city with so many festivals and things to do, and places to walk to from our home in the Marigny. Then I visit my mom on the Northshore on the weekends, where I get to ride dirt bikes and four-wheelers, fish and enjoy the country.”

Andrew has been immersed in music since he came to live with Cheryl and Mark. It was a natural happening since Mark is a trombonist and composer, who taught music theory and notation, and wrote a textbook that is still used on the subject at Berkley College of Music, before moving to New Orleans.

“I call him ‘Uncle Pop’ and there is always music around here since he teaches trombone, makes his own CDs, plays with some of the best musicians in the city, and often jams at home,” he adds. “He never gave me lessons but he does love to share his musical knowledge and give me advice.”

It may be too early to peg Andrew as a lifetime performer since one of his great loves is making videos and he has become quite proficient at his hobby.

“I have been making videos for about as long as I’ve been able to hold a camera,” he says with a smile. “I started making Lego stop action videos, then mini spy movies, and now I love making action videos featuring me with my friends showing our moves and acrobatics on our skateboards.” 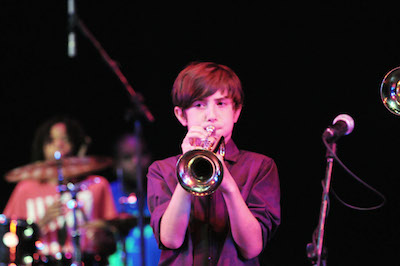 Andrew has also taken two photography workshops, and had three photos hanging at the Ogden for White Linen Night recently, and has participated in three Media Arts workshops at NOCCA.

New Orleans is certainly the place to expand your expertise with making videos, performing as a musician, or knowing how to speak French.

“I’m not sure where skateboarding comes in,” he continues. “I don’t have much time for the sport during school, but it’s my favorite past-time when school is out. I love to skateboard around the Marigny near Washington Square with friends. I also love to video friends who skateboard at the new Crescent Park, but my all-out favorite place to skateboard is at Parisite, the skateboard park on Paris Roads under I-610.”

Andrew’s choice of fashion while skateboarding is a cap turned backwards, a casual shirt, cargo pants, and bright socks. “My socks are fun,” he says. “I like to wear special socks to help show off my moves.”

“Kid Gerber,” as he is fondly called by Aunt Cheryl, is fully taking in living in New Orleans, where he has already learned that it is fun to have your own style. “And it was fun to do something a bit different by showing my barber exactly how I wanted my latest haircut to look,” he says. Yes, you can indeed have your own style in America’s most interesting city when you are just 13 years old.