An Industry In Reform

With drilling about to restart five years after the Deepwater Horizon spill, how have things changed?

The Deepwater Horizon was 41 miles off the coast of Louisiana, at a drilling site called the Macondo Prospect, when the first explosion happened. It was close to 9 p.m. CDT in April 2010. High-pressure methane gas rocketed from an improperly closed exploratory well into the semi-submersible rig. Of the 126 crew members on board, 11 were never recovered, despite a subsequent search effort. Two days later, on the morning of April 22, the Deepwater Horizon sank into the Gulf.

First evidenced by a telltale slick on the water’s surface, the leak of oil issuing from the seafloor continued for the next 87 days, finally capped on July 15, 2010. On Sept. 19, the well was declared officially sealed. The U.S. Department of Interior estimates a total of 4.9 million barrels of oil discharged from the damaged well into the Gulf of Mexico during that period of time.

The oil spill had far-reaching effects, with marine and wildlife habitats along the Gulf Coast suffering extensive damage both from the oil itself and the ensuing cleanup efforts. According to the National Wildlife Federation, in the six months following the disaster, over 8,000 sea turtles, birds, and marine mammals were found dead along the Gulf Coast.

Five years have passed since the catastrophe, which ranks as the largest accidental marine oil spill in the petroleum industry’s history. The high-profile spill – along with a consolidated civil suit against BP, who held a controlling share of the oil well, and other parties involved in the manufacturing and operations of the Deepwater Horizon — has set industry practices and regulations into sharp relief for a concerned public. Now, with drilling at Macondo Field set to begin again, how have the oil and gas companies sought to assuage fears of another fiasco?

The environmental disaster hardly went unnoticed by the general public, who were brought to outcry by grim news reports and viral images of oil-coated creatures washing ashore.

Over the summer of 2010, as oil continued to gush from the seafloor and drift toward the Gulf Coast, cleanup crews and rescue efforts assembled to do their part in stemming the flow of casualties. Oil needed to be contained and dispersed; animal populations throughout the region found their champions. On its company website, BP, deemed the responsible party by the federal government, estimates its own involvement in the response efforts at “approximately 48,000 people, the coordination of approximately 6,500 vessels and the deployment of approximately 2,500 miles (13.5 million feet) of boom to contain or absorb the oil” during that summer. 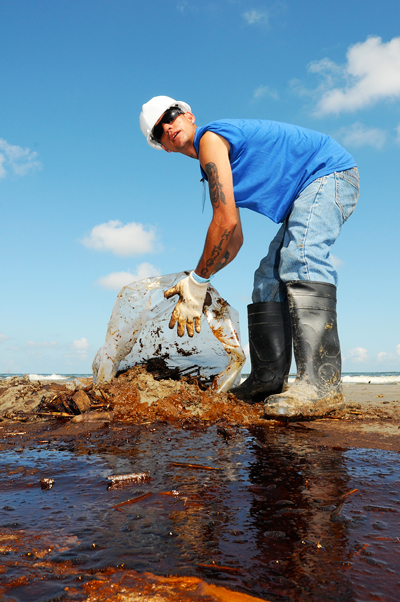 A worker cleans up oily waste on Elmer’s Island, just west of Grand Isle, Louisiana, May 21, 2010.

The vigilant media coverage kept public awareness and outrage well fueled. For some, the only adequate response was an eye-for-an-eye retribution for the parties involved in the spill. Others simply wanted to know, How did this happen?

On April 30, 2010, just over a week after the Horizon sank, President Obama put a hold on new offshore drilling leases while the spill was under review.

The defenses and safety measures of the rig, built by Transocean, were thoroughly investigated as commissions and experts searched for a weak link.

While it was not the only protective barrier to fail, the vessel’s blowout preventer underwent particular scrutiny.

The final report released by the National Commission on BP Deepwater Horizon Oil Spill and Offshore Drilling also cited a failure of the operation to closely adhere to safety protocol, instead prioritizing costs and deadlines over potential risk.

The report noted that the thrifty but reckless measures went unnoticed because the Department of Interior had “failed to create and apply a program of regulatory oversight that would have properly minimized the risk of deepwater drilling.”

The disastrous environmental impact of the oil spill, and the stern response from the federal government and other concerned parties, called into question the continuation of the industry’s brawny role in Louisiana.

The loss would be significant, to put it lightly. According to “Energy Sector: A Giant Economic Engine for the Louisiana Economy,” a 2007 report by economist Dr. Loren C. Scott for the Louisiana Mid-Continent Oil and Gas Association, the industry was having an average annual impact of $70 billion on the state’s economy. The American Petroleum Institute reported that the industry generated 330,000 jobs in 2007 alone.

In the years since the spill, the Obama Administration has placed more aggressive standards on companies in the oil and gas trade. On April 13, 2015, Secretary of the Interior Sally Jewell announced new regulations proposed as a result of recommendations given by representatives from academia, environmental groups, equipment manufacturers, federal agencies, and the oil and gas industry.

Following the advice of these experts, the Bureau of Safety and Environmental Enforcement has established baseline requirements for design, manufacture, repair and maintenance of the blowout preventers.

“Both industry and government have taken important strides to better protect human lives and the environment from oil spills, and these proposed measures are designed to further build on critical lessons learned from the Deepwater Horizon tragedy and to ensure that offshore operations are safe,” said Secretary Jewell at the April 13 press conference announcing the proposed regulations.

The 2010 Drilling Safety Rule, instituted by BSEE in October 2010, has also raised the standards for well design, casing, and cementing; all applications for drilling permits must meet these now more stringent requirements.

With 129 engineers on staff (as opposed to 106 in 2011), and more specialized inspectors who have received further training in their area of scrutiny, the BSEE can more ably review and regulate various offshore projects.

Offshore Technical Compliance, an inspection company based out of Covington, acts as an ally to oil and gas companies as they work to meet new industry standards.

CEO Michael Bethea notes a change in the oil and gas industry’s relationship to the Safety and Environmental Management System rule (SEMS), which places performance-based standards on companies and allows crew members to participate in safety management decisions.

“It’s gone from a voluntary program to a mandatory one,” says Bethea. “I don’t think it’s something they didn’t want to do before. But now the regulations are changing fast.”

AN APP FOR THAT

The now-mandated inspections keep drilling sites up-to-date and accountable, but collecting data from the site can be tedious, inefficient and even dangerous when performed with pen and paper.

In early May 2015, Envoc, a custom software company, released a mobile inspection app designed to streamline the inspection process. Dubbed “Spotter,” users load the app onto an intrinsically safe tablet — Android, Apple, and Windows all offer heavy-duty casings for this purpose — and gather pictures, details on potential problems, and other inspection information that is then transmitted to the company’s own database for a custom report.

Keying in data from an inspection on the app, which Envoc customizes for each particular company, can be as basic as tapping a “yes/no” field or typing in the answer to a question.

“Our app is easy to use, especially for people who aren’t familiar with technology or who don’t want to use it,” Lasseigne says. 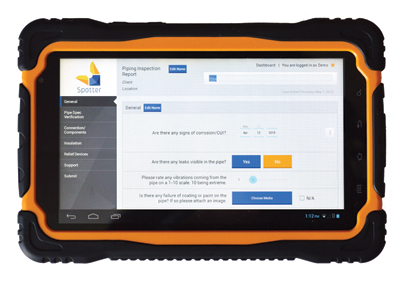 “[We offer] an in-the-field, classroom-style, practical assessment of their knowledge when it comes to well control,” says Bethea.

BSEE inspectors are now required to be on-site for the testing of blowout preventers. Before receiving permission for a deepwater drilling project, the operator must be able to prove to BSEE its capability to contain a potential subsea blowout. 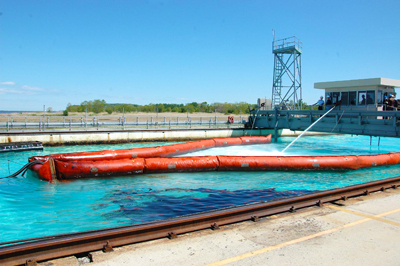 Testing oil spill containment equipment is a critical part of the Bureau of Safety and Environmental Enforcement’s mission of protecting safety and the environment on the Outer Continental Shelf. Some testing is done at Ohmsett National Oil Spill Response Research Facility in BSEE’s 2.6 million-gallon salt water tank for simulating ocean conditions.
Photo courtesy of Bureau of Safety and Environmental Enforcement

The investigation into the Deepwater Horizon disaster revealed a weakness in the rig’s blowout preventer. The well had failed to seal properly due to portions of pipe buckling between shearing blocks.

The proposed well control rule from BSEE includes a requirement “that shear rams be designed to include a technology that allows the drill pipe to be centered during shearing operations” as well as the mandated use of double shear rams, designed to bolster chances that the drill pipe could be cut in the event of a leaking well.

While rising to meet new operational mandates from the federal government, the oil and gas companies have launched safety- and environmental-minded initiatives of their own.

In the midst of mending its reputation, BP has continued to innovate away from hazardous practices and insufficient equipment. The company has developed a blowout preventer monitor, increased the quality of cement used on its wells, and offered to share with the rest of the industry its own updated technology for deepwater well caps and tooling. Their message to the public: Safety is key.

WILL IT HAPPEN AGAIN?

“It was a perfect storm, what happened at Macondo,” says Bethea. “It could have happened 100 times … 99 times out of 100, we wouldn’t have had that accident.”

But that one small chance is more than enough to keep the industry on its toes.

Spotter — a mobile inspection app designed by Envoc — can be found at spotterinspectionapp.com
Find the Bureau of Safety and Environmental Enforcement, along with its proposed rules and recommendations to the industry, at bsee.gov.