The aging population; what it means on a local level.

Andy Rooney once summarized the dilemma of aging by quipping that “the idea of living a long life appeals to everyone, but the idea of getting old doesn’t appeal to anyone.”
Appealing or not, our demographic patterns reveal that more people are living longer than ever — with potentially profound implications for our country and our region. We live in an unequivocally aging population, defined by demographers as one in which older residents constitute an increasing proportion of the total populace.

The general reasons for these trends are well understood. For one, the generation approaching and surpassing the 65-year threshold is historically large, products of the post-World War II surge in births. Secondly, advances in medicine and long-term care have extended life expectancy and lowered mortality rates. And finally, birth rates have, on the whole, declined consistently over the past 30 years, from just under 17 births per 1,000 residents in the early 1990s to 12.5 in 2014. 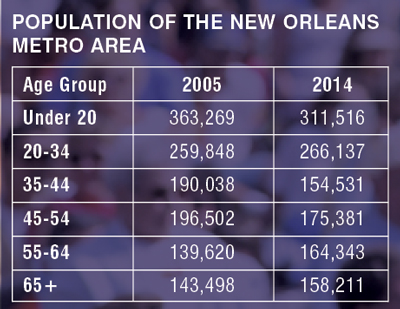 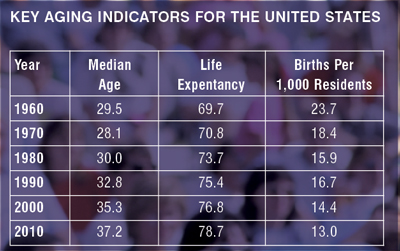 Statewide and locally, our recent population shifts have been complicated by Hurricane Katrina, but we still mirror the national landscape. Between 2000 and 2010, Louisiana’s population increased by 1 percent, whereas the population ages 65 and over grew by 8 percent and the population 85 and up rose by 12 percent. Conversely, the number of residents between the ages of 35 and 55 declined by 5 percent, and the under 20 population declined by 8 percent.

In the New Orleans metro area, we have nearly 15,000 more residents ages 65 and older than prior to Katrina, an increase of 10 percent. Meanwhile, the number of residents in nearly every age grouping under 55 has decreased significantly, the exception being the fact that we have 16,000 (10 percent) more residents between the ages of 25 and 34 than before the storm.

What do these trends mean for our country and our region? First, it is important to realize that nearly every country in the developed world has similar demographic trajectories, and that the United States actually fares better than many nations. The reason is that despite the fact that our birth rates are not robust enough to avoid overall population decline, our immigration rates provide valuable and meaningful replenishment of our working-age and younger populations. It is imperative that we maintain policies and employment opportunities, both nationally and regionally, which accommodate constructive numbers of new Americans.

Secondly, political and business leaders must engage with one another to foster economic and workforce policies that account for these undeniable demographic circumstances. Many economists and think tanks have proposed thoughtful and diverse solutions—from phased retirement programs to trade policy adjustments to ensuring the viability of entitlement programs for the elderly—that merit consideration and implementation. Even as we address the economic and political problems that are often more immediate and more conspicuous, this longer-term and less obvious demographic reality requires exigent attention.