With AMPware’s CrankCase, the power is, quite literally, in your hands.

While Hurricane Katrina left behind a wide path of destruction and devastation, for some, like Mark Gabriel and Erik Durr, it was a motivating force.

Gabriel and Durr are the founders of AMPware, a Baton Rouge-based charging technology company whose products — CrankCase and CrankBox — are both seemingly simple but revolutionary tools for today’s technological world.

Billed as the “world’s first power-generating case for smartphones,” CrankCase is a protective smartphone case with a built-in generator. Just unfold the handle and crank to charge the phone.

It’s simple. Well, sort of. AMPware has engineered a rare-earth magnet, dynamo generator that produces 23 times more power than solar technology and works any time of day — or night. For the user, 1 minute of simple “cranking” will generate up to 30 minutes of music playback or 5 minutes of talk time.

Gabriel and Durr’s other product, CrankBox, is a charger for USB-charged mobile devices. The USB port is conveniently placed under the handle; just provide a cable. The mechanism is similar to the CrankCase and charge times are the same. With Crank Box, you can essentially charge any USB-powered device like a smartphone, Bluetooth headset or Fitbit — anywhere and anytime.

“Our technology is similar to your car’s alternator, but the challenge here was to make it slim and small,” he says.

Both AMPware items are still in production and will be available in October.

Gabriel, a native New Orleanian, was in his first semester at LSU when Hurricane Katrina hit. He evacuated, forgot his cellphone charger, and had no way of reaching friends and certain family members to check in after the battery died on his phone.

“You hear different stories and see that people didn’t have communication; I knew it was a problem, but I didn’t know what to do,” he says. “There was no way to charge a phone, even though you could crank power a radio.”

Gabriel later finished his degree at LSU and worked on a few startups before the idea of how to make a self-powered phone came to him from a flashlight.  “A little while after the storm, I literally took apart a crank flashlight and stared at the guts like a deer in the headlights. I knew there was a way to make this all work; I just didn’t know how at the time,” he says.

After working for a startup beverage company and managing production at a Fortune 500 spice company, his business savvy started to improve. Later on, he says “things started to click.”

While the impetus for CrankCase came from disaster, Gabriel says both products are invaluable to everyday life.

“For the most part, you’re going to use your home charger overnight, but there’s a gap at the end of the workday and you want to meet friends for drinks, and you’re at 1 percent charge and just want to text them,” he says. “If you have this case, it’s never a concern.”

Gabriel’s philosophy is that products should be of the very best quality, and he wants his company to use the most durable and reliable materials possible. This could mean that they’ll be spending a bit more on screws or using tough materials like polycarbonate for the case.
“We know as a startup, we’re depending on good reviews and we need to give the consumer the best possible version of this technology,” he says.

For CrankCase, this means making sure the case is slim, pocket-size and lightweight. Currently designed for iPhone 5/5s and 6, the CrankCase handle doubles as a kickstand so that users can watch movies, too. When not in use, the crank tucks neatly away and the entire device resembles a Mophie or other battery-charging cases that are popular. The main difference is that those cases charge only for a short time, while this case is meant to make power forever. The device is also intended to be water resistant.

CrankCase and CrankBox will be offered in more color choices in the future, but for now, Gabriel jokes, “It’s available in any color your want—as long as it’s black.

“We’re working with a world-class design firm to help improve the look and feel of our products,”he continues. “We just need to find the right partners to help us take this to the next level.” 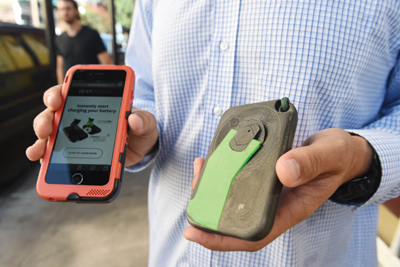 Advanced orders for the CrankCase and CrankBox are being accepted now on AMPware’s Indiegogo site. Both products will be available in October. (Prototypes seen here.)

It’s important for Gabriel and Durr to keep the price of their products within reach of the average consumer. They’ve calculated that $129 for the CrankCase will help them grow sustainably “without being greedy.” The CrankBox is less expensive at $69, and according to Gabriel, “still ranks as one of the best investments that you could make.” At the very least, you’ll never find yourself at the gas station buying a charger because you left yours at home.

Gabriel doesn’t hesitate to admit that there’s competition in the crank-charging market, but he and Durr are convinced of their product’s quality.

“What sets us apart [from the competition] is that we come in slimmer and more lightweight; but we’re still the most powerful charger that works the best … If the product is heavy and needs its own bag or sling, then people won’t buy it,” he says. “I’m confident that on a product-to-product basis, we’re the best out there.”

Initially, Gabriel and Durr envisioned a younger crowd buying CrankCase – one that would immediately grasp the utility. But after the developmental stages, they learned that CrankBox and CrankCase appeal to a wide customer base. For younger people, active on social media or constantly on their phone—it’s a tool to keep their device charged nonstop. For business owners, it’s a way to keep employees “plugged-in” at all times. He adds that CrankBox, especially, can serve as a peace-of-mind purchase for parents to put in the glove compartment or in a kid’s backpack just in case of car troubles or other emergency situations.

In a crowd-funding campaign on Indiegogo, AMPware raised over $60,000 for its initial product. Gabriel is matching those funds, plus more. He adds that the company is also looking to work with local investors to grow CrankBox and CrankCase to its full inception. Both products are sold only on Indiegogo.

“We don’t have sales outside of Indiegogo at this point because we want to make sure our customers are satisfied with the product, and what they are getting should be working to the fullest potential,” he says.

At this time, the company is focused on finishing product development on schedule and adding new team members. Right now, Gabriel and Durr oversee the production. In fact, the two-member team oversees everything. This helps to keep costs low in the initial phases of the startup. Later, they plan to bring on a full marketing and PR team. 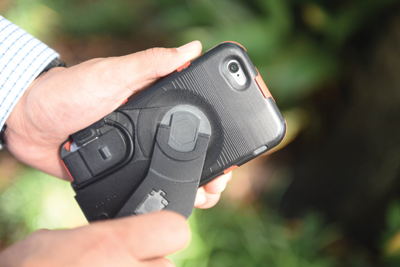 Inspired by a crank flashlight, one minute of “cranking” with a CrankCase equals approximately five minutes of talk time.

Gabriel and Durr aren’t strangers to startups. The duo met at the LSU Biological & Agricultural Engineering machine shop, and soon found they had a knack for science and entrepreneurship. Their impressive list of inventions includes a machine that can remove oil from protective marsh swamps without destroying the environment. They’ve also invented a revolutionary gun safety.

“These inventions have been pretty noble, but my crowning achievement would be to make the never-ending power supply — even Isaac Newton said it couldn’t be done,” Gabriel says, adding that at the increasing rate we’re using our mobile devices, the charts they’ve seen show a huge growth for this industry in the foreseeable future.

Durr recently moved to California to help the company gain access to more tech resources. As for Gabriel, he says, “Louisiana is my home, and I intend to stay here. We really want to grow organically, focusing on the place that really needs this technology.”

He believes that if more people would have had access to AMPware products, that perhaps there could have been fewer casualties from Katrina. “Just being aware in a crisis situation is huge—being able to call or text out for help could really make a difference.” He and Durr want to hit the market with something people will be able to use every day, but also when they need it, so that it can literally be a lifesaver.

Currently, AMPware is focused on finishing development for these two products, but plans to grow the company into a well-known brand. Customers can still order their products on Indiegogo before the campaign is closed. They expect to officially launch their products by the end of 2015, but may make some special edition items available locally before the official launch.

For Gabriel and Durr, AMPware is about much more than just charging phones; it’s about empowering people.

“If people had these phone cases during Katrina, then maybe more people could have kept up with the news or have been able to call out for help,” he says. “It seems everyone is looking for green, renewable power and zero emissions; as an engineer I’ve always been told that was the goal. To literally bring power to the people, in a practical and eco-friendly way, is a dream come true.”