All That Glitters Is Gold At Jefferson Variety

All year long, Schneider works to create the most coveted specialty throw of the Krewe of Muses Mardi Gras parade, the decorative shoe. A member of the all female krewe for 6 years, Schneider has transformed a workroom attached to her New Orleans home into a gallery of glitter, a studio of sequins, an art house of appliques and a sparkly shrine for her embellished high heel shoes.

“I go because they have the best selection and the largest amount of extraordinary objects and trim,” she said. “It’s uniquely New Orleans, and they cater to everyone so you can make a great costume no matter your price point.”

Schneider said she frequents Jefferson Variety more than 20 times a year, and spends anywhere from $20 – $80 a trip.

“You could buy less, but I don’t have that kind of self restraint because their items are so irresistible,” she said.

She believes no other store in New Orleans sells the kind of florid fabrics that Jefferson Variety does, and she especially appreciates the fact they let her buy materials in small amounts. That way, she can only buy 6 inches of a specialty fringe to adorn her shoes, and not be forced to buy a minimum yardage.

“They really perform a public service to New Orleans and for Mardi Gras,” she said, “because nobody else has the patience or selection to allow you to buy small quantities of a large variety of things.”

“We know the Mardi Gras business,” Rusty Tracy, owner of Jefferson Variety Stores, Inc., said. “And it’s a 12-month a year business. As soon as it’s over you start working on the next one, the next bead and the next costume. We’ve been working here all our lives, and we sell all the stuff Mardi Gras is made of.”

From Tracy’s 8,000-square foot Jefferson, LA, showroom, and 8 additional warehouses, he sells more than 400,000 units of Mardi Gras beads (a combination of dozen and gross), 5,000 pounds of glitter and countless feathers, sequins, appliques and bolts of costume fabric, a year.

“The biggest challenge is keeping up with the times,” Tracy said of the family owned and operated business. “Back in the 1980s we sold 20-40 varieties of Mardi Gras pearl beads. Now, there are so many choices, about 200 different kinds, and customers are always looking for bigger, better and brighter.” 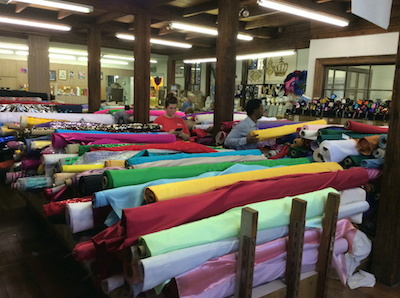 Tracy’s grandfather, father and uncle bought a “Five and Ten” store in Harahan, LA, in 1957, and started selling a variety of goods from the start. Soon after, popular Mardi Gras paraphernalia started filling up the Jefferson Variety shelves. Tracy said when his cousins closed their expansive fabric store in Metairie in the early 2000s, his vibrant vendibles made Jefferson Variety, and its current Iris Street location, the premier custom costume fabric supplier in town.

Tracy, 57, has been working at Jefferson Variety since he was 15, and is in charge of creating, ordering and transporting up to 36, 40-foot shipping containers of Mardi Gras beads a year. His wife Lisa is in charge of ordering the store’s fabric and decorative materials and tracking the trends.

With 10 employees, mostly family members, and additional seasonal help from January 2 through Carnival, Jefferson Variety can host hundreds of customers a day who are all looking for the unusual, the unrivaled and the unparalleled in costume design.

“In January and February, it’s like Toys ‘R’ Us at Christmas,” he said.

Dean Gagé spends about $100 every time he shops at the store. A bow tie designer for his New Orleans company, Gagé Ahmenuel, Gagé said he uses flashy fabrics to make ties for his clients who are mostly Mardi Gas Indians and members of the Zulu Social Aid and Pleasure Club.

“I come back to Jefferson Variety again and again,” Gagé said. “This is the place I like to go for special feathers and trims. You get a real customer service feeling here. They take care of their customers.” 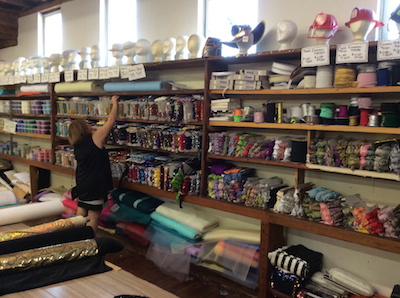 On biennial trips to China, where he’s been doing business with the same people for 35 years, Jefferson Variety creates and ships beads for up to 7 parading groups a year in New Orleans, Metairie, Houma, LA, Shreveport, LA, and Galveston, TX.

When he visits the factories, showrooms and suppliers, Tracy is armed with a long list and lots of original designs for his store and his clients. Samples are made, followed by approvals, orders and shipments. He said the whole process could take up to 14 weeks, depending on how the beads are shipped.

“Last year, shipping was held up by labor disputes in California which meant some of our competitors’ customers didn’t get their beads until after Mardi Gras.” He said. “We prefer to ship everything through the Port of New Orleans, not the West Coast.”

Tracy said he orders 6 shipping containers of Mardi Gras beads for the store by Easter. For the krewes, he orders by August 1, and starts to receive shipments in November, and the latest by Christmas.

“You have to be on top of everything,” Tracy said. “You have to know your cost, freight, duty and packaging before setting your price. Not many people know Mardi Gras rhinestone crowns, tiaras and scepters have an 11% duty tax.”

Tracy said his favorite bead he ever created was their crawfish boil bead in which a crawfish polystone medallion dangles in the middle and little corns on cob, garlic, potatoes and mushrooms separate the necklace’s red beads.

“We know the season has been a success when we sell out of all our merchandise,” he said. “And some of our high end beads sell at $40 a dozen.”

Walking further into Jefferson Variety is like tumbling into a kaleidoscope of color.

Bolts of brilliant chiffons and charmuese, sassy silks and satins and variegated reflective, iridescent and metallic textiles are heaped on tables in a splashy display. How many yards of this costume commodity do they sell? “No clue,” Tracey laughs, saying his wife Lisa is the purveyor of all things textile.

Unlike the Mardi Gras beads, Jefferson Variety’s fabrics and feathers come from New York. Tracey said the laws and regulations for importing these items from overseas are too volatile, and they let their northern suppliers deal with the drama.

“Our supply changes all the time,” he said. “What may be in style one year won’t be in style the next. The last few years the hot fabric was velvet; now its embellished brocades, fancy fabrics with appliques already sewn in that can cost up to $200 a yard. Salesmen come from all over to show us the latest. But that’s our specialty, costume supply.”

Tracy said they sell fabrics to fully costume at least 20 krewes a year, sell 100 pounds of glitter to individual customers at a time, sell large plumed ostrich feathers for up to $450 a pound and countless yards of sequins and original appliques, many of which they design themselves and manufacture in China.

While Jefferson Variety has a website, Tracy said there are few internet sales. “You can’t see the colors and feel the fabric on the internet,” he said. “Sometime we cut a swatch and send it out to our customers, but most of our business takes place in-store. You have to understand, there are so many colors. Silver and gold are no problem, but when you get into color in material and color of feathers, there are so many different shades. If you don’t buy it all at the same time, the next batch could be different.”

To keep track of the idiosyncratic inventory, you’d think Jefferson Variety would need a state of the art computer system, but they don’t. They do much of their business by handwritten invoices.

“We do have computers in the office, but we have too many fabrics to barcode,” he said. “It’s so much easier and more accurate to hand write personal invoices.”

Tracy wouldn’t quantify how large Jefferson Variety’s multi-million dollar business is except for saying, “We bring in more than $1 million and less than $10 million a year.” But no matter how large they get, he said their focus is individual customer service.

“Everything here has to be customer assisted,” he said. “We just have so much merchandise, customers need help. When we hire staff in the summer, they usually figure out where everything is by fall.”

Julia Stefanski has been shopping at Jefferson Variety for 5 years. An active member of 2 New Orleans dance troupes, 1 marching group and Krewe de Vieux, Stefanski is also a leather mask and costume designer for her own business, Ne'er-Do-Well Designs.

Most recently, she was at Jefferson Variety buying fabric for her Tap Dat dance troupe costume.

“I need a yard and a half of gold stretch material for the lining of a jacket, coat and tails,” she told a craft consultant at Jefferson Variety.

“I have piles of fabric at home,” she said, “and this is the best place for costume fabric. Other places in town sell boring fabrics, bridesmaid dress fabric; they’re not as dynamic as what you can find here. I like coming in and finding something fabulous that will work. This store is inspirational.”

Stefanski said she spends anywhere from $50 – $200 every time she comes to Jefferson Variety. She said the store really came through last year when she was working on a Cheshire Cat costume. “I couldn’t find purple fur anywhere,” she lamented. “But I found a purple eyelash fabric here that turned out to be perfect.”

“You get a lot of personal attention,” she said. “They’re helpful. About 80% of the materials for each costume I make comes from here. One day, I hope they’ll let me sneak into their feather storeroom.”