All Male No More

Nurse. Teacher. Secretary. Homemaker. When it comes to societally-approved career choices, women were pretty limited in the United States until well into the 20th century. ¶ Then came that famed, bandana-clad powerhouse, Rosie the Riveter. During World War II, with so many men fighting overseas, desperation through traditionally male-dominated industries wide open to women for the first time. Between 1940 and 1944, approximately 6 million women joined the workforce. ¶ When the war ended, women were largely pushed out, and they’ve been fighting to break back in ever since. While giant strides have been made in workplace equality, some fields have fared better than others. Here, Biz New Orleans takes a look at three still heavily male-dominated industries and the local women who refuse to be intimidated from making their mark.

Top of the Top
There are 164 professionals that have earned the title of master sommelier since the Court of Master Sommeliers, Americas inception; 138 are men and 26 are women.
The prestigious Master Sommelier title began to be offered in the United States in 1969. The first woman to earn the designation was Madeline Triffon in 1987.

The Women of Wine

Brennan’s wine program is a rare offering in the male-dominated wine industry.

Brennan’s restaurant has become notable for a lot of things since opening in 1946 — including Breakfast at Brennan’s, bananas Foster, tableside dining and of course, the turtles. Adding one more item to the list, the restaurant is now the only one in the city whose wine program is run completely by women.

Charged with a wine cellar boasting more than 13,000 bottles, including approximately 4,000 different selections, Braithe Tidwell has been Brennan’s wine director since the end of 2017. Joining her in the cellars— which once served as a carriage house with stables — is sommelier Sarah Arceneaux. The duo can typically be found working the room of the restaurant, assisting diners with wine choices, making sure the wine is being served correctly and constantly managing the cellar, assisted by an automated tracking system.

“We’re kind of like librarians,” says Arceneaux. “A majority of our job is in the cellar — which is kept at 57 degrees, so it’s great in the summer — we do a full inventory every 28 days.”

“It’s a very competitive process,” says Tidwell, “and it’s definitely male-dominated, which comes I think in part from the fact that the original wine stewards in Europe were always men.”

The final level exam to become a master sommelier has only about an 8% pass rate. Of the 164 professionals in the United States that have earned the title, 138 are men (82 %) and 26 are women.

“More women are sticking their necks out there and going for it,” says Tidwell, who notes that women are particularly well suited for careers in wine, which require two main things: strong organizational skills and a well-defined palate. “It’s a fact that women actually have more taste buds then men.”

They also have a better sense of smell — women have an average of 43% more cells and almost 50% more neurons in the olfactory centers of their brains.

Arceneaux says her love for wine stems from her love of history and helping people make memories.

“Wine is history, culture and art,” she says. “Wine is the capturing of a moment in time and I think of us as storytellers. We get to be part of the fun times of people’s lives and that’s just really special.”

That special storyteller role is one she says she’s excited to see more women take on.

“You’re seeing more women in control in this industry,” says Arceneaux. “The face of wine really is changing, and I feel happy to be a part of that.”

The Origins of the Sommelier
In the late 1600s, sommeliers were employed in the households of lords to choose the wines and be in charge of table settings and desserts. The sommelier would commonly use a small silver saucer on a chain, called a tastevin, to check his lord’s wine for poison. 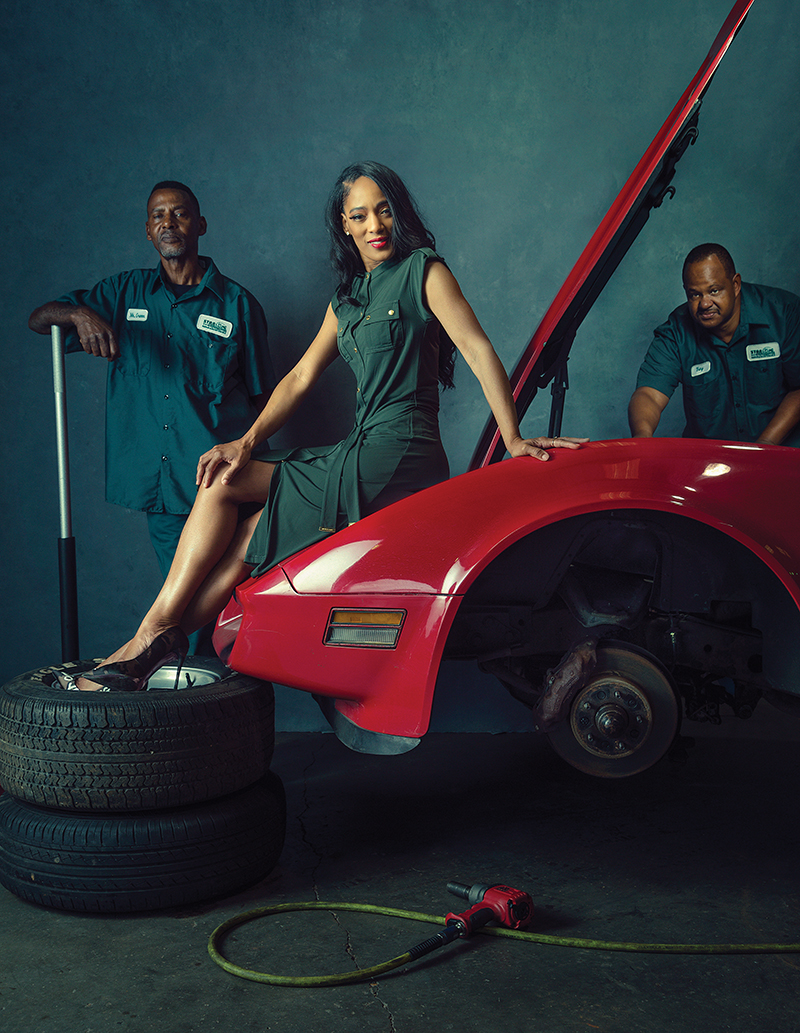 Star Automotive owners Shawntele Green and her husband Gary (left) are shown here with one of the company’s technicians, Troy Declouette.

A Different Kind of Green Initiative

Shawntele Green is bringing a woman’s touch to the automotive industry.

This month, Shawntele and Gary Green celebrate their first year in the new home of Star Automotive — a 5,500-square-foot building in Belle Chasse that includes seven offices and two conference rooms. It’s a long way from how the couple started their business as a mobile mechanic called Gary’s Auto Service 20 years ago.

“My husband is incredible with cars and I enjoyed working in the background — doing the planning, the taxes, the organizing for the business while serving as a stay-at-home mom to our five kids,” says Shawntele Green.

Now that their children have grown, Shawntele has stepped into the foreground and is using her passion for helping people to help the company create a new program aimed at training Louisiana’s incarcerated and recently released of any gender in automotive repair.

“The vision is now coming off the paper,” says Green. “We have been closed for a few months to get ready and when we reopen between June and July we’ll have at least eight employees in the program, which will focus on not just education, but motivation and momentum and will also have a strong spiritual component. This is important because we want to encourage people not just to earn a living, but to go out and grow their own business and when they leave us we want them to have something to hold onto.”

Green says Star Automotive frequently helps female customers, who turn to the Greens for help with buying cars, getting a second opinion on repairs and especially with diagnostics.

“It can be intimidating for women and I’m happy they feel they can come to us,” she says. “We’ve been offering free diagnostics for 11 years now. This business is all about building relationships.”

In addition to educating and creating jobs for former inmates, Green says she envisions a new concept for her industry that caters more to women.

“I want to create an automotive repair bar,” she says. “A place where you can come and get your car worked on, and while you wait you can get your nails done and there’s a place to get something to eat and a play area for the kids. Doesn’t that sound great?”

By the Numbers
Automotive Industry Disparity
8% of executives in the top 20 motor vehicles and parts companies in the Fortune Global 500 are women.
9.6% of automotive repair and maintenance workers are women
21.8% of automobile dealers are women
26.7% of motor vehicles and equipment manufacturing jobs are held by women.
56% of C-suite leaders in the automotive industry worldwide point to women as a critical pool of underutilized talent
Source: Catalyst.org – stats from 2017 and 2018 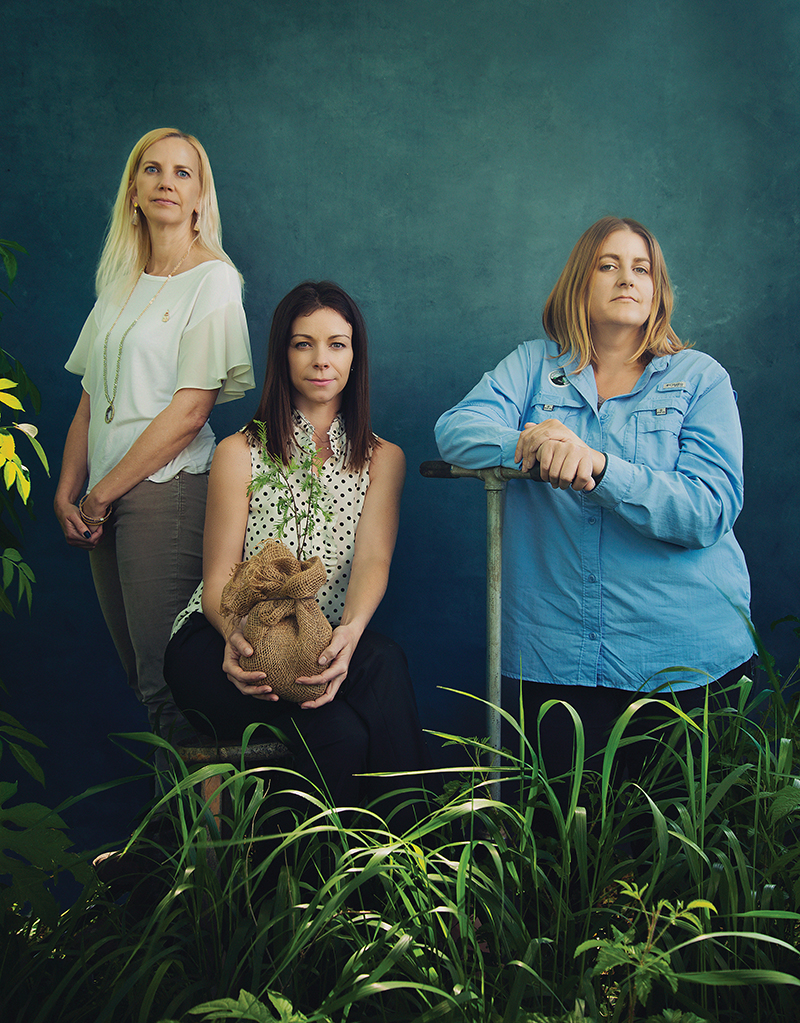 Restore the Mississippi River Delta Coalition includes a team of female scientists and engineers fighting to save our state.

Every 100 minutes, Louisiana loses a football field of land into the Gulf of Mexico. Over the years, the construction of levees, dams, shipping channels and canals, and oil and gas infrastructure, paired with hurricanes and sea level rise have placed the region in crisis level.

An extensive problem necessitates an equally extensive solution, which is why the Mississippi River Delta Coalition has partnered with the state of Louisiana and the U.S. Army Corps of Engineers. Scientists from a range of organizations, including the Lake Pontchartrain Basin Foundation, National Audubon Society, Coalition to Restore Coastal Louisiana, Environmental Defense Fund and the National Wildlife Federation, conduct and synthesize research to help educate policymakers and guide effective solutions.

Given that many science and engineering fields remain male dominated, the coalition is also unique in that the staff is majority female. Twenty-six of the 42 members of the coalition are women.

“I do feel like we have a strong balance of women,” says New Orleans native Kristi Trail, executive director of the Lake Pontchartrain Basin Foundation, who noted that when she graduated with her undergraduate degree in engineering in the mid-’90s only about 10% of her class were women. A self-described “lifelong environmentalist,” Trail says being a part of a strong group of women leaders has been “a different world.”

“I have a daughter and I want her to see that there are women out there solving Louisiana’s problems. Not just one, but teams. We have a ways to go, but we’ve come a long way since when I was starting out.”

For Alisha Renfro, coastal scientist with the National Wildlife Federation, the chance to be part of the coalition was too good to pass up.

“I fell in love with the wetlands early on in my life, and the situation here, the tremendous scale of the loss and the presence of so many competing factors — I was just drawn to the challenge,” she says. “I figure if you can work out how to do this in Louisiana, everywhere else will be easy.”

A sedimentologist, Renfro says one of the priority projects is the Mid-Barataria Sediment Diversion. After more than 30 years of scientific study, the project will create gated levees that can be opened to allow much-needed sediment and fresh water into degrading wetlands in the Barataria Basin. The project is currently in the permitting process, which is set to end in November 2020.

On the policy side of the team is Cathleen Berthelot, senior policy manager with the Coalition and Environmental Defense Fund. A native of Washington D.C., Berthelot spent six years working on Capitol Hill before moving to New Orleans to work with Senator Mary Landrieu for two years as her regional representative for transportation policy in the state.

“Mary actually introduced me to the issues with the wetlands and her passion for the cause definitely brushed off on me,” says Berthelot. “Now my job is to work with policymakers, like our state senators, to keep them abreast of what’s going on, with the end goal being to get the priority projects in our master plan implemented as quickly as possible. I’m proud of what we do. It’s such a good example of how an issue can be very bipartisan or nonpartisan. It’s all about keeping our coastline around for generations to come.”

Women in Engineering
13% of engineers are women (Society of Women Engineers) ¶ Among science and engineering graduates, men are employed in a STEM occupation at twice the rate of women. (Association for Women in Science) ¶ Only 30% of women who earn a bachelor’s degree in engineering are still working in the field 20 years later — 30% of which have cited “organizational climate” as the reason they left.

By the Numbers
Louisiana’s Disappearing Coastline
2,000+ square miles of land Louisiana has lost since the 1930s, an area roughly the size of Delaware.
2,250 additional square miles the state is projected to lose over the next 50 years if no action is taken.
100 million tons of sediment passes through Louisiana every second. Much of it is lost to the deep waters of the Gulf.

Women Remain Underrepresented in Science, Technology, Engineering and Math Fields
Women are 47% of the workforce but make up 26% of the STEM workforce. (Association for Women in Science) ¶ Less than 30% of the world’s researchers are women. (Unesco Institute for Statistics)