All His Ducks In a Row

Robert Merrick, CEO of Latter & Blum Companies, showcases his private hobbies and collections in his own bit of real estate.

Robert Merrick’s office has all the characteristics of a handsome man cave – comfy leather furniture, shelves filled with hand-carved duck decoys, favorite photos of him catching big fish and a TV. His is a quiet space outside of the normal traffic pattern of the busy headquarters of Latter & Blum Companies on Notre Dame Street in the Warehouse District.

“I like the quietness of my office tucked in the back corner of the building we renovated after our previous headquarters was damaged in Hurricane Katrina,” says the CEO of the largest full-service real estate brokerage in the Gulf South.

While it has a laid back air, Merrick says his den-like office, and the adjoining conference table in the next room, have been the scene of some large deals. “This office is conducive to getting the job done,” says the New Orleans native who recently celebrated his 70th birthday. “There is an intimate feeling here that makes for a pleasant business atmosphere.”
Looking around, you will see printed signs of the companies that make up Latter & Blum today. 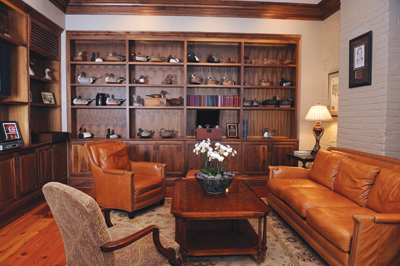 The sitting room in Merrick’s office is a quiet space in a corner of the first floor that lies out of the normal traffic pattern of the busy headquarters of Latter & Blum Companies. It features shelves showcasing Merrick’s collection of hand-carved duck decoys made by Louisiana craftsmen.

“We are the leader in Baton Rouge, Lafayette, Lake Charles, and Central Louisiana,” he says, calling out all the names of the company’s affiliates. Latter & Blum Companies employs approximately 2,000 workers – 60 percent of which, Merrick says, have been with the company 10 years or longer.

When pressed further to talk about a great deal that was consummated in his office, Merrick pulls his chair closer and tells how he created a multi-million-dollar windfall without investing a dime of his own money through a once-in-a-lifetime land swap. When pushed to provide details, he smiles and says, “It’s a secret.”

Merrick sits at his desk, stacked with pending business deals, then turns around and points to the table behind him, to his gallery of family photos. “I have four daughters and 10 grandchildren and there are photographs of all of them somewhere in my photo collection,” he says. 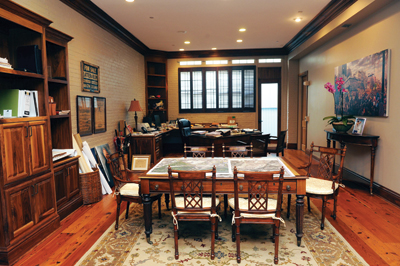 Merrick’s spacious office features a large table for viewing plans and maps, with corner tables behind his desk.

Not a neat-nick by any stretch of the imagination, the wall along the floor of one side of the room is stacked with photos that haven’t yet made it to the gallery, such as his portrait by noted New Orleans artist Newt Reynolds, a gift from his sister Patricia Brinson, next to framed awards for philanthropic donations.

Merrick seems to have a special affinity for a chair the University of New Orleans (UNO) gave him after he endowed the Robert W. Merrick/Latter & Blum, Inc./Realtors Endowed Chair in Real Estate to the University 10 years ago.

“It’s a pretty classy chair,” he says, standing behind the chair with a gold emblem on the front and a plaque denoting his endowment on the back. “It isn’t anything fancy, but it is a nice thank you reminder of my gift.” 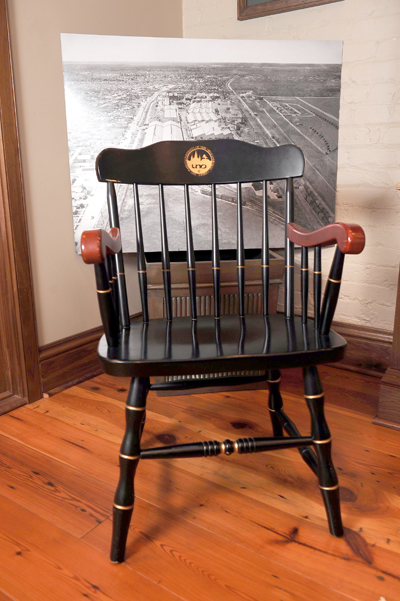 The chair given to Merrick by the University of New Orleans after he endowed the Robert W. Merrick/Latter & Blum, Inc/Realtors Endowed Chair in Real Estate to the University.

It isn’t surprising that UNO awarded Merrick an honorary doctorate last year, not only in honor of his financial contributions, but also for his service for chairing the business school‘s advisory board and the university’s board of trustees.

With a little prodding, Merrick offers up a quick list of charities that have benefited from his generosity – Junior Achievement, United Way for the Greater New Orleans Area, the American Red Cross, Boy Scouts of America, and St. Martin’s School and Tulane University, where he was educated. Certificates of appreciation and other awards for giving are spread throughout his office.

But there is one honor of which he is particularly proud.

Merrick doesn’t want to leave the subject of his charitable giving before mentioning one aspect of his giving that is near and dear to his heart. “There is nothing I am more proud of than our commitment to the higher education of the children of our employees and associates,” he says. “We have granted 330 scholarships, valued at almost a half a million dollars since 1991.”

It is easy to see why a busy executive such as Merrick needs a quiet place to work.

“I love everything about this office,” he says. “Coming to work here is a pleasure and I am usually in my office by 7:30 a.m. each day.” Then he lowers his voice like he is sharing a secret as he adds, “But I do slip away on Friday afternoons during hunting season.”

One of Merrick’s favorite sports is hunting wild turkeys near his farm in Poplaville, Mississippi. He also prides himself in being quite the fly-fisherman, pointing to several framed photos taken with his prize catches around the office.

“I credit Charles Frank with introducing me to the joys of collecting duck decoys,” Merrick says. “He was an authority on the carving and painting of the decoys and he passed along his passion for collecting to me.” The shelves in the sitting room of Merrick’s office were designed especially to display his impressive collection of hand-carved decoys, and he is quick to tell you that he is a member of the Louisiana Wildfowl Carvers and Collectors Guild. When asked to single out his favorite duck decoy, he answers simply, “I like all of them.” 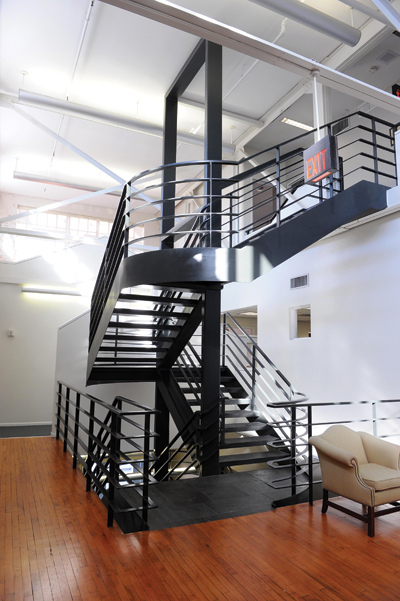 The new stairway in the headquarters of Latter & Blum Companies demonstrates the building’s contemporary flair. 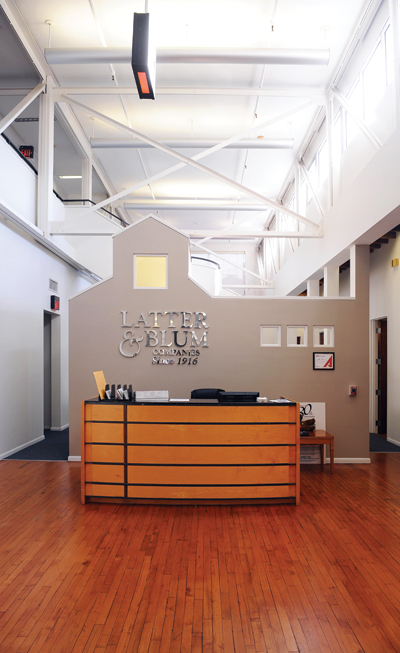 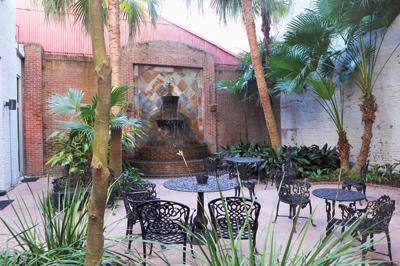