Fulton Street's success comes down to one thing: teamwork.

What was once a relatively abandoned and forgotten few blocks — passed over for the busy Poydras Street and Convention Center Boulevard — is becoming one of New Orleans’ main dining and entertainment destinations. Fulton Street, located in the city’s Warehouse District, has evolved quite a bit over the past 10 years.

A Bit of History

To understand Fulton Street as it is in 2017, it helps to take a look back about 20 years to when New Orleans hosted the 1984 World’s Fair.

The fair stretched across 84 acres along the Mississippi River ­— from today’s French Market down to the Convention Center. The 1984 Louisiana World Exposition had a price tag of $350 million, and the unfortunate distinction of going bankrupt. Attendance was low, contractors were laid off and vendors lost money.

The Fulton Street Mall, as reported by The New York Times (June 18, 1984), was “planned as a small version of Bourbon Street with a lively mix of late-night bistros, shops and fast-food restaurants.”

But merchants at the mall complained about a lack of business, saying fairgoers couldn’t find them.

Fulton Street as we know it today came into its own in 2006, after Hurricane Katrina, with the construction of the Harrah’s Hotel — a 450-room luxury hotel and anchor property that revitalized the street. Manning Architects designed the building, integrating the new structure into the existing historic urban warehouse architecture. The firm also designed the brick pedestrian mall, entrance portal facing the casino, casino tunnel, landscaping and the bandstand. A key design element is space for sidewalk dining for restaurants on both sides of the street.

The World’s Fair-era comparison to Bourbon Street is clear to Richard Campanella, Tulane University geography professor and author of Bourbon Street: A History.

“I view Fulton Street as an attempt to keep some of the cache of Bourbon Street and the temptation of people staying in hotels in the Warehouse District and Central Business District, to give them a Bourbon Street replicate along Poydras, close to the casino, and spend money in that area,” he says. “To replicate what works about Bourbon Street without replicating what doesn’t work.”

Which is to say you won’t find anyone selling “Big Ass Beers” on Fulton Street. What you will find is a mix of restaurants offering a variety of entertainment and dining options with a wide range of price points.

The entertainment district and pedestrian mall of Fulton Street comprise the block from Poydras crossing over Lafayette. Harrah’s owns all of the buildings and land on the first block up to Lafayette Street.

Ownership and management of the businesses on Fulton Street is mixed. Aprés Lounge and Ernst Café are independently owned and operated. Harrah’s owns and operates Manning’s sports bar, as well as the hotel conference and meeting space. The casino leases property on the street to other businesses, including Ruth’s Chris Steakhouse, Gordon Biersch, Grand Isle and Fulton Alley.

Chris Biehl is the director of food and beverage at Harrah’s New Orleans. “Several of those restaurants are listed in the top 10 percent on Trip Advisor for best restaurants in the city,” Biehl says. “In addition to that you have a 450-room hotel that sits at over 90-percent occupancy, with almost 10,000 square feet of meeting space, and events going on in the courtyard. You have all these different things happening simultaneously and it really becomes a bustling corridor.”

As Fulton Street has grown, the upscale bowling alley, Fulton Alley, has seen its business grow tremendously, according to General Manager Scott Hellmers. “When [owner] Kyle Brechtel opened Fulton Alley, he didn’t know exactly what to expect — though he strongly suspected that it was going to be successful and an exciting option for people,” Hellmers says. “Our big takeaway over the last two years is people love the area, people love to have events down here, both events open to the public, as well as events that are private to the different concepts.”

Ray Sutherlin is the spokesman for Aprés Lounge and Ernst Café, the two independently owned and operated businesses on Fulton.

“Fulton Street is very unique in New Orleans,” Sutherlin says. “This is a walking main street feel where you have several dining and entertainment options. Have a drink here, an appetizer there, go bowling, go gambling or see a show at Harrah’s if you want to.”

Weekends Are Dominated by Locals

“What you find are a variety of offerings so it’s not just one demographic that’s walking down the street looking for the same thing,” Biehl says. “The diversification of these outlets really speaks to the fact that we attract both locals and tourists, and I think they play off of each other very well.”

Chancie Sibley is the group sales manager at Gordon Biersch. She says development of Fulton Street has brought increased foot traffic — and increased visitors — to the restaurant. “Hotels, restaurants and attractions have been built around us since our inception in 2004,” she says, “making our location a hot spot for tourists and locals.”

The street is also walking distance from downtown hotels and several residences in the booming condominium market of the Warehouse District. “Between the businesses and the residences, and of course the tourists, it’s kind of an ideal location,” Sutherlin says. “But weekends, without question, are dominated by locals.”

Sutherlin also points to safety and accessibility as a big draw for Fulton Street. “A misconception about most of downtown New Orleans is that parking is a pain,” he says. “We’re right under several hundred parking spots, the Riverwalk parking lot, parking lots on South Peters. Then on top of all that, at night it’s well lit. The safety of Fulton Street is a calling card.” 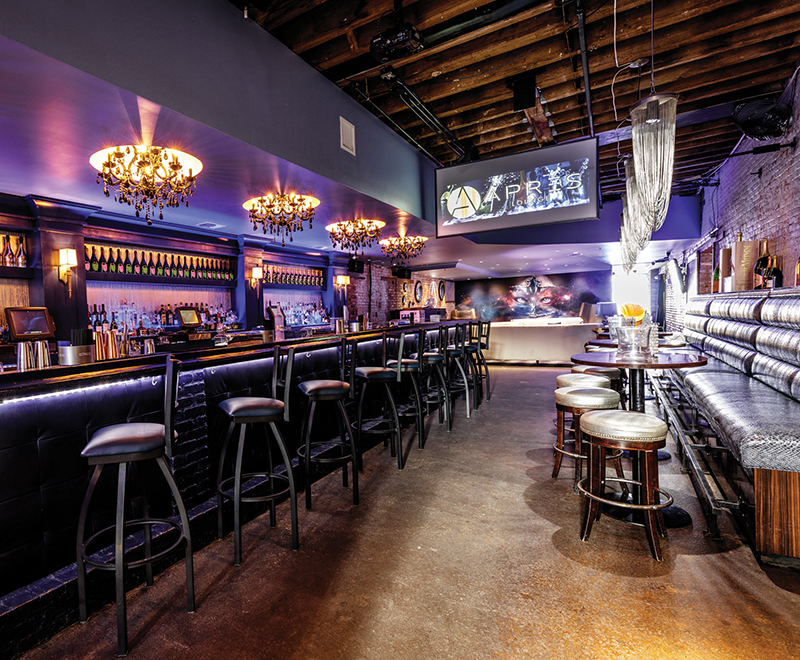 Aside from its restaurants and Harrah’s Hotel, Fulton Street is known for utilizing its outdoor space for unique events.

Ray Sutherlin oversees Derby on Fulton— the third year of which was held on May 6. Derby on Fulton celebrates the Kentucky Derby, with patrons turning out in their best seersucker suits and derby hats. Organizers turf the brick pedestrian boulevard and the event features live music and live horses, courtesy of their charity partner, the New Orleans Police Department Mounted Division — which is breeding their own horses at City Park. Sutherlin says attendance has grown at a rate of 20 to 25 percent each year, attracting between 700 and 1,200 people.

The other marquee event for Fulton Street is Miracle on Fulton, which is managed by Casey Biehl and Harrah’s. The event, which began in 2007, attracts thousands of visitors from December 1 through Christmas Day each year. Miracle on Fulton features photos with Santa and live local music every weekend. The Harrah’s bakery and pastry team also constructs a gingerbread display, housed inside the hotel lobby.

The main attraction, though, is a rare sighting in New Orleans: a daily snowfall.

“Miracle on Fulton has made a major economic impact on all of us,” says Sibley of Gordon Biersch. “People come from all over to witness the decorations, lively music and the amazing atmosphere. It also helps us out in the long run, as it brings awareness to Fulton Street and its many businesses.”

All of the parties involved believe that Fulton Street as a whole is greater than the sum of its parts.

Sutherlin says the collaboration between businesses on Fulton Street is unique. “Everybody agrees some of these events will benefit some businesses more than others, and some might not benefit at all,” Sutherlin says. “But it’s a partnership, and the goal is to grow Fulton Street as a whole. To everybody’s credit, everyone believes in that mission.”

Sutherlin agrees. “It’s formed quite the team. We have fun doing it, and as far as I can tell, it’s unique. It’s not looked at as competition — everybody wants to succeed, and we want everybody to succeed. That teamwork is powerful.”

Biehl adds that many opportunities still exist for Fulton Street.

“I do not think that the street is even tapped. I think partnerships with guys like Ray Sutherlin and all these good partners that we have, I think there’s a lot of opportunity.”