A critical force in New Orleans’ economy, the hospitality industry remains one of the top employers in the city, but it’s also one where a large portion of the jobs are low wage/low skill. In a city with a poverty rate of 27 percent (almost twice the national average of 15) multiple ventures are now starting to focus on the well-paying careers that do exist in hospitality and move more people up the ladder.

Known for food and culture that’s unlike any other in the world, along with the largest Mardi Gras celebration in the country, New Orleans has long been a favorite with tourists and transplants who flock to the city for its acclaimed Southern hospitality.

With tourism numbers in New Orleans continuing to break records — reaching 17.74 million visitors and $8.7 billion in visitor spending in 2017, a 5.7 percent increase in visitors over 2016 — employment opportunities in the industry are also on the rise. According to a November 2018 study funded by the Conrad N. Hilton Foundation, the accommodation and food service industry in Greater New Orleans is expected to increase by 11 percent regionally and 16 percent within the city itself by 2027, resulting in 8,400 new jobs in the region, including 6,400 in New Orleans.

According to the same study, however, 85 percent of the jobs in this industry are considered low wage/low skill, with three-fourths requiring less than a month of on-the-job training and 74 percent not even requiring a high school diploma.

The top six most popular jobs in the industry (together accounting for just over 50 percent of all hospitality jobs) are waiters and waitresses, cooks, food preparation, bartenders, maids and hosts and hostesses. Among these professions, median wages in 2017 ranged from $8.81 to $10.42 per hour according to the Hilton study — well below what is considered to be a living wage.

Mavis Early, the executive director of the Greater New Orleans Hospitality and Lodging Association (GNOHLA), acknowledges the abundance of low wage/low skill jobs, noting that hospitality is one of the few industries with a very low barrier to entry, but also one in which advancement is “probably faster than most industries.”

“There’s a high demand for talented people that is far greater than supply,” she says. “If you want to work your way up, there are so many directions to do so, no matter your skill set or education level.”

In an effort to increase awareness of these opportunities, GNOHLA launched an online and interactive campaign last year called “Faces of Hospitality.”

“The website, FacesofHospitality.org, includes 10, 60-second-or-less videos where various professionals share their success stories and reasons why they love working in hospitality,” Early says.

“The nice thing about working in hospitality is that you don’t have to do the same thing forever,” says Brian McCallan, an engineering analyst with the Sheraton New Orleans Hotel, during his interview. “You can change your job every six months to a year and continue to grow and understand different aspects of the hotel industry as you move up in the company.”

The website also links back to an area of the GNOHLA’s site, which highlights the range of career opportunities in hospitality.

“It’s so much more than what people typically realize,” Early says. “Human resources, property management, group sales, IT, financial management, convention and meeting services, all of those opportunities are there.”

In addition to offering a wide array of career options and opportunities to advance relatively quickly, Early says benefits offered by hospitality providers are good.

“Hotels offer health insurance at good rates, and dental, and some tack on life insurance,” she says. “There can be opportunities to travel at an amazing discount, and most hotels offer meals.”

With so many jobs available in the industry, Early says GNOHLA has made recruitment a major priority, especially with young people.

“My goal this year is to continue to work on workforce development,” says Early. “Right now, we work with Delgado on a program called YOST (Youth Occupational Skills Training) that’s designed for 18-to-24-year-olds, where young people can get industry-based certified trainings in hospitality and tourism.” Trainings for the YOST program are free to qualified applicants and include job placement assistance, job-readiness seminars and supportive services like gas cards or bus passes. “My goal is to get involved with four other outlets this year that are working with opportunity youth. We want to create a pipeline into the industry for our young people.”

“Right now, we are working with Ride NOLA,” she says. “They are surveying our hospitality employees to determine where better transportation is needed. Then we’ll work with RTA. A lot of our workers have been pushed to Marrero due to high housing costs and it currently takes three transfers to get into Downtown. We want to get that changed.”

In a December 2018 study entitled “Benchmarking New Orleans’ Tourism Economy: Hotel and Full-Service Restaurant Jobs,” The Data Center noted that 17 percent of total jobs in the tourism and hospitality cluster in the region are “good jobs,” which pay a living wage or provide pathways to jobs in other occupations that pay a living wage, noting that because the sector is relatively large, the number of “good jobs” is also large.

The question then becomes: How do you get more people into them?

In January —  the same month as the opening of the New Orleans Culinary and Hospitality Insitute (NOCHI) — Tulane University’s A.B. Freeman School of Business launched a program inside its new Stewart Center CBD — co-located with NOCHI — called Entrepreneurial Hospitality.

“We began with a one-week intensive, a deep dive into the hospitality industry, specifically aimed at having undergraduate and graduate students plan and present new hospitality concepts to industry professionals,” says John F. Clarke, Freeman’s associate dean of graduate programs, who is overseeing the new venture. “This program is different because it focuses on the entrepreneurial side of things and in understanding hospitality and really the customer experience. To that end, it’s relevant to people in any industry; everybody has customers, and everybody has employees, which are internal customers.”

This venture is Tulane’s first real step into hospitality.

“We’ve had some courses in the past, but this is actually a concentration that can be used toward an MBA or a one-year master’s in management program,” Clarke says. “It’s actually such a perfect fit because New Orleans has a long history of innovation in hospitality and we have alums in every aspect of it that we can partner with.”

Many of these alums, Clarke says, are fairly recent graduates, including serial hospitality entrepreneur and now faculty member A.J. Brooks, whose ventures include Simone’s Market and the Catahoula Hotel.

“The Catahoula Hotel was actually one of A.J.’s final projects in his MBA program with us,” says Clarke.

After six years spent talking to stakeholders both inside and outside the hospitality industry, Clarke says he’s excited to see classes start this summer.

“We are excited to create a differentiated experience for our students,” he says, “and strengthen our ties to this critically important industry.” 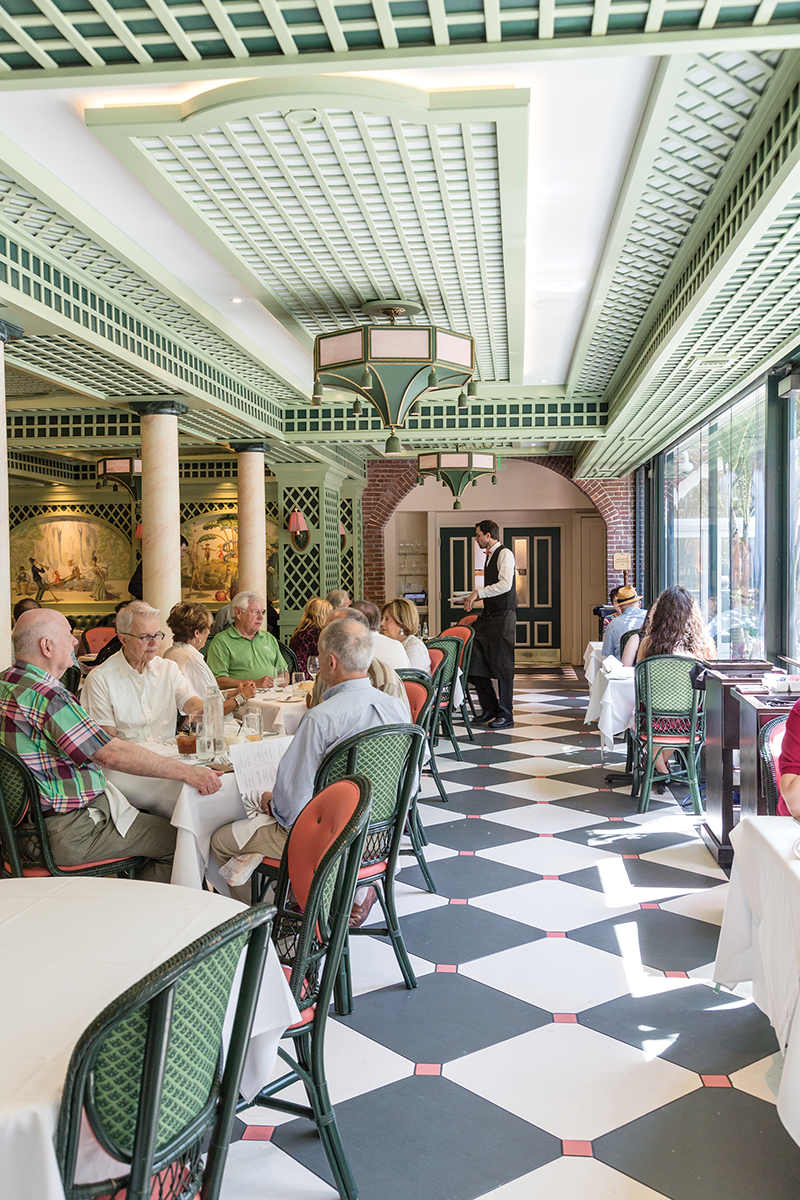 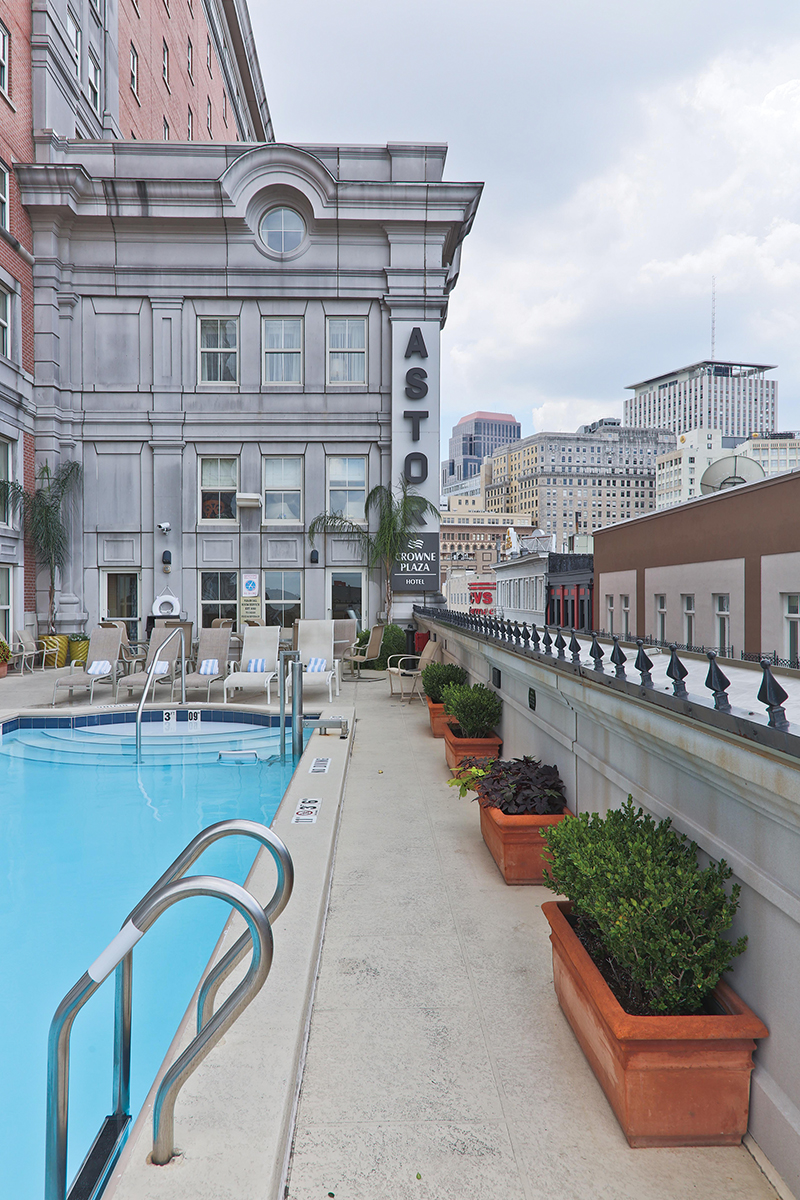 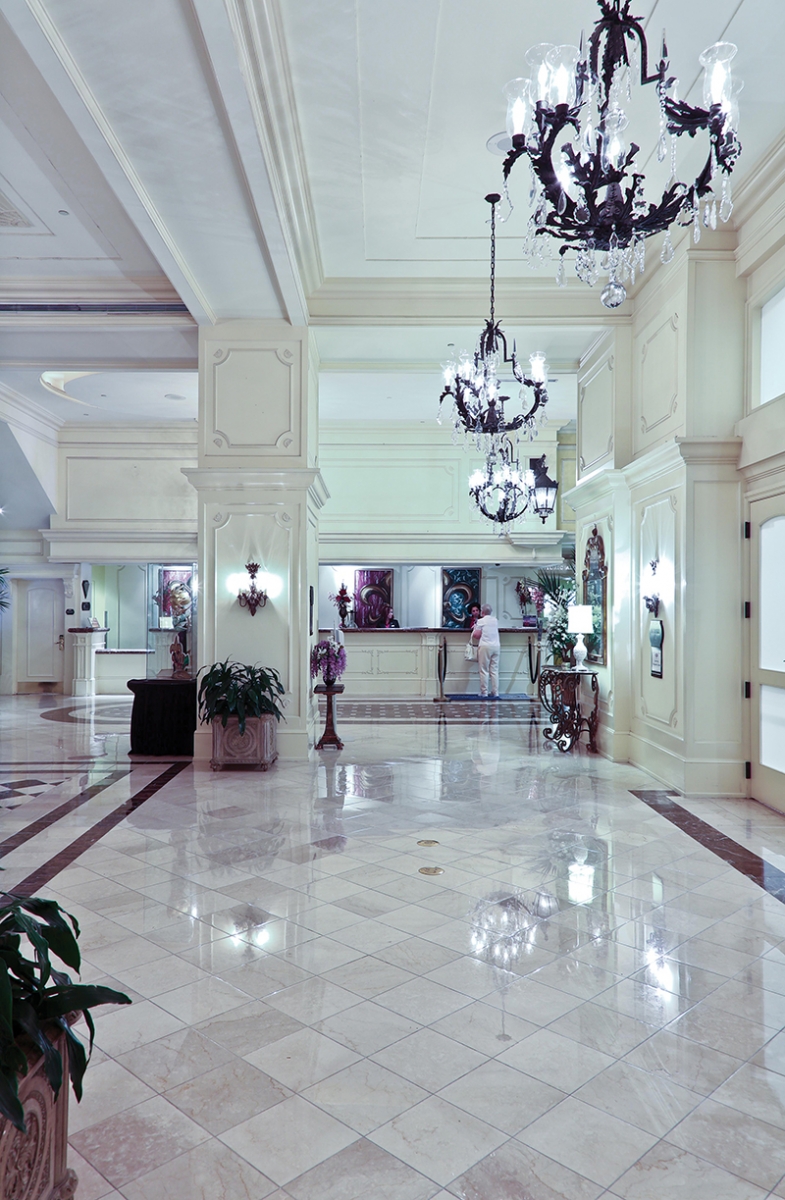 More than 80 percent of jobs in the hospitality and tourism industry in the New Orleans region require no previous work experience, and 74 percent have no formal education requirements.

Source: “Hospitality and Tourism in the New Orleans Region: A Labor Market Snapshot” by JFF

New Orleans Restaurants by the Numbers

5,720 are waiters and waitresses working in full-service restaurants. 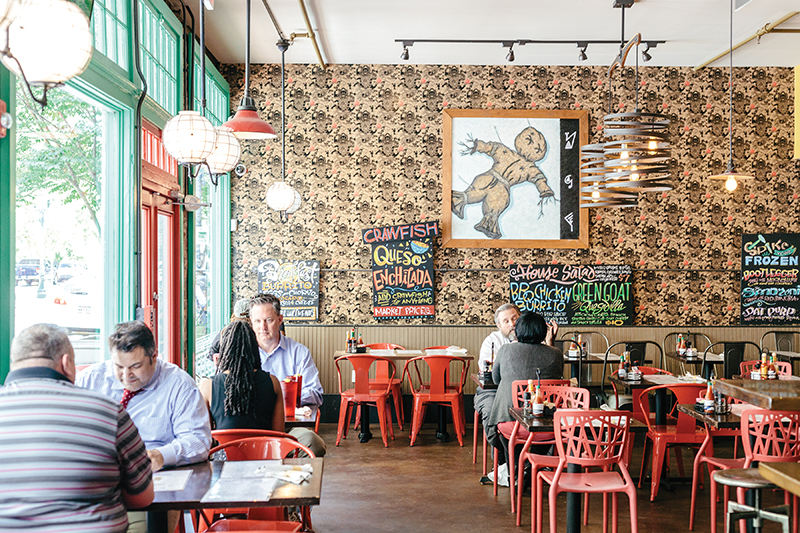 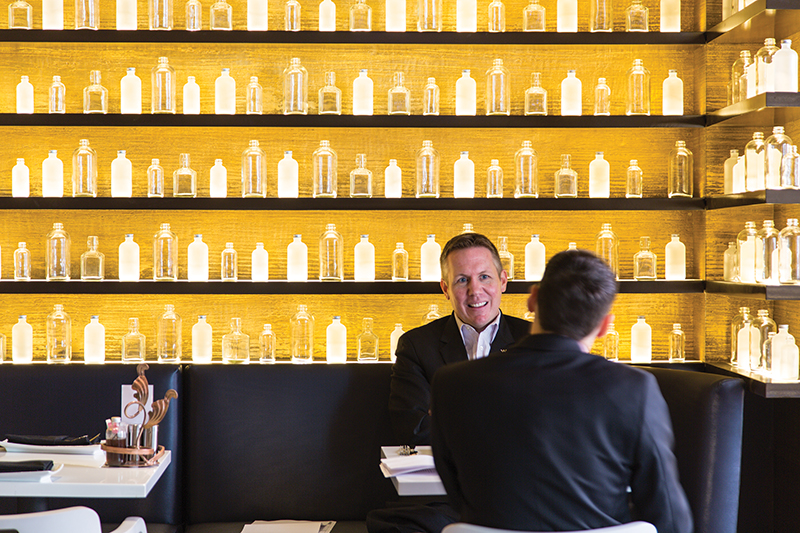 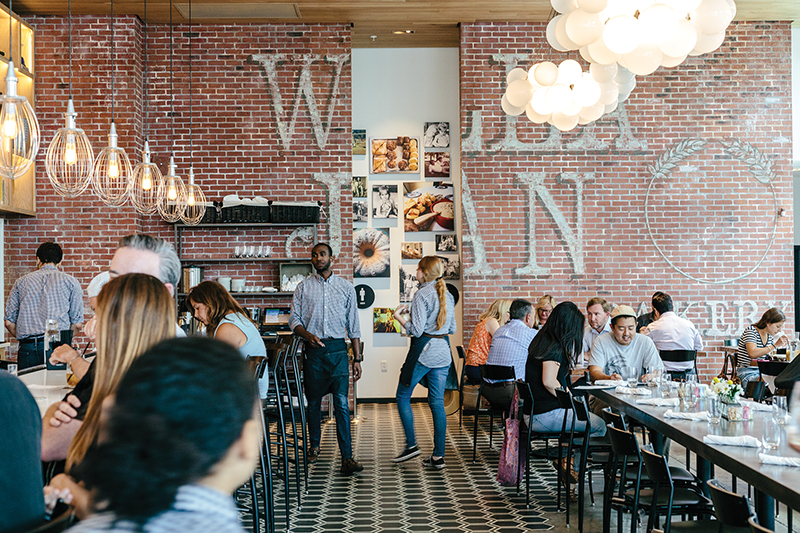 Nearly 8,400 new hospitality and tourism jobs are projected for the region, including 6,400 in the city of New Orleans by 2027.

Source: “Hospitality and Tourism in the New Orleans Region: A Labor Market Snapshot” by JFF

New Orleans Hotels by the Numbers 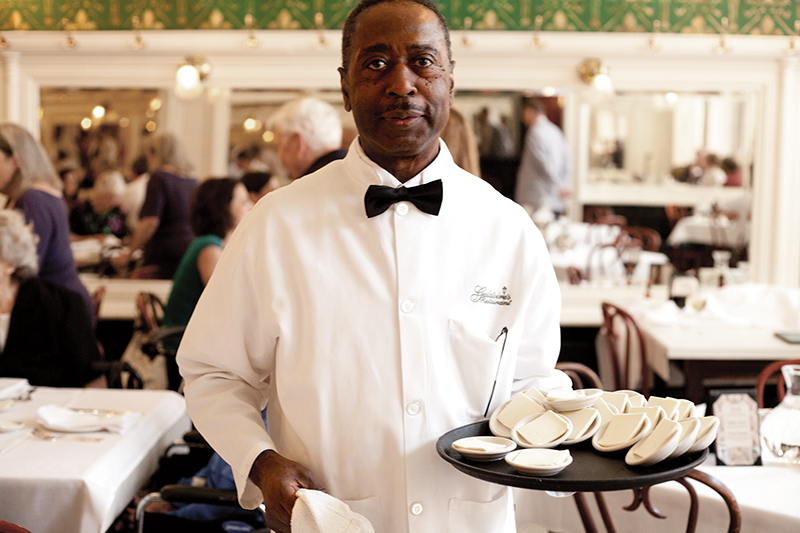 A new national catering conference called CaterUp!, designed to help restaurant leaders grow their share of the $61.5 billion U.S. catering market, will take place April 29 to May 1 at the Roosevelt Hotel in New Orleans.

Participants will learn the latest industry data, along with new strategies to drive revenue growth and operational efficiency through panels and guest speakers from brands like Corner Bakery, P.F. Chang’s and Red Robin. Session topics include the state of the catering industry, using technology to streamline business, staffing, building a catering brand, acquiring new customers and driving demand.

The conference is being run by ezCater, the largest online marketplace for business catering in the world. More than 60,000 restaurants and caterers use the company’s tools to grow and manage their catering ventures.

“Catering makes up 5 to 6 percent of restaurant sales volume, and that number is growing,” says Jim Rand, catering practice leader at ezCater, who led content development for the conference. Rand says consumer shift to delivery and takeout driven by technology means restaurants have the potential to grow revenue in a way that is “typically more marginally profitable than in-restaurant transactions.”

“There’s no one restaurant or segment that owns the catering industry right now,” he says. “It’s wide open.