A note from Evan Loukadakis, government relations manager for the HBAGNO, on the high cost of housing in the United States.

I’m beginning my second year at the HBAGNO, and I still get puzzled looks when I tell people what my job title is. People usually ask, “What do you do in government relations?”

Essentially, on a day-to-day basis, I plug into what our elected officials and regulators are doing—or proposing to do—at the local, state and federal level. The government relations team as a whole evaluates proposals that would affect the home building industry. Moreover, our team works with elected officials to craft legislation to improve the home construction industry.

On the flip side, if legislation is creating hurdles that we believe will negatively impact the industry, we work to educate government officials on the consequences a proposed action could bring. In nutshell, that’s what we do on a day-to-day basis, and if you ever have questions related to home building legislation, we’re always happy to discuss it with our members.

One of the most gripping issues facing the greater New Orleans area (and quite frankly, a majority of the United States), is housing affordability. According to a nationwide survey, nearly three out of every four American households believe that the nation is suffering a housing affordability crisis, and most respondents reported this is a problem at their local and state level (nahb.com).

The easy, four-word explanation to this crisis is that demand is outpacing supply; however, you can’t understand much about a problem with just four words. You want to know what’s gumming up the home-building machine. If you ask an expert, like our senior vice president and chief economist in Washington D.C., Robert Dietz, the biggest impediments to home building can be categorized as the “5 Ls” – lumber, labor, laws, land and lending.

Now, the three areas we impacted the most in 2018 were lumber, labor and laws. Day in and day out, our members work tenaciously to build safe, quality homes to millions of Americans. When they go up against these impediments, we’re there as reinforcements to help push them forward.

Lumber prices were brutal during 2018, which hiked prices up as high as $639 per thousand board feet (Chicago Mercantile Exchange), and pushed the price of a single-family home up by $9,000. For an average, multifamily unit, prices increased by $3,000 (NAHB). Our builders expressed deep concern over the skyrocketing cost of lumber, which ultimately led to a spike in the final price tag of a newly finished home.
When an alarming issue like this rises, we work quickly and strategically to find a solution. As the Home Builders Association, we carry influential clout on Capitol Hill; when we speak on an issue, legislators listen. The prominent magazine The Hill has even recognized us for our influence in Washington. That’s why one of the first moves we took was to work with our friends on Capitol Hill to bring attention to this burning issue. As we met with representatives in the halls of Congress, we rallied 171 signatures requesting that the Trump Administration work with Canada to renegotiate the softwood lumber agreement.

Shortly after our letter went public, we met with the Secretary of Commerce Wilbur Ross to discuss the influence certain groups may be exerting to manipulate the price of lumber. And after an almost year-long awareness campaign, lumber prices have fallen to $329 per thousand board feet (CME), which have prices to where they were at the beginning of 2017. This is a victory we can be proud of, but I must point out, that we can’t take all the credit — other factors contributed to the fall, but we helped bring an end to the price manipulation, which shot up prices.

Compounding the housing affordability problem, builders and contractors across the United States are hard pressed to find skilled individuals to build homes. To put that in perspective for you, there was an average of over 225,000 construction jobs left unfilled, month-to-month, during 2018 (US News & World Report). This labor gap inevitably leads to projects missing their deadlines, which means that the final price tag will be higher for home buyers.

Before I jump into what the HBA does to solve this problem, I’d like to point out that as a society, we’ve left our children with the notion that it’s a college degree or nothing. Fact: the top 25% in construction trades earn at least $60,000 per year (NAHB).

Lucrative careers exist in the construction trades and through our education arm — Home Builders Institute — we train veterans, at-risk youth, and underserved populations with the skills and experience they need for successful careers in the home building industry. We give them the tools to literally build their own lives. And over the summer, NAHB Chairman Randy Noel made a pledge to President Trump that HBI and NAHB will educate and train 50,000 new workers over the next five years to help meet the demand for skilled workers.

To round out our 3Ls, lastly and most importantly are laws. On average, government regulations account for a whopping 24.3 percent of the final price of a new single-family home, which equates to around $85,000 (Housing Policy and Economics Group). In the home building industry, we have a heaping amount of regulations and restrictions that are enforced at the local, state and federal level. Builders must be aware of and abide by the local municipality or parish government in which they are building.

One policy proposal that we have been fending off for a few years in New Orleans is mandatory inclusionary zoning (IZ). In its broadest sense, IZ generally requires housing developers to sell or rent a proportion, or percentage, of their units below market rate — which means part of your property is now worth less than it should be. IZ has been used across the country for decades, and the empirical data illustrates its lackluster results; Harvard University’s Ed Glaser has even described IZ policies as a tax on middle-income earners.

As defenders and advocates for the home building industry, we couldn’t let this regressive policy move forward. During the 2018 regular session, we worked with Senator Danny Martiny to shepherd a bill (SB 462) through the legislature that would create a scenario where builders and developers could work with a local government to build affordable housing through voluntary economic incentives — not through a mandate. SB 462 passed both chambers in the legislature by a wide margin and made it to the Governor’s desk. Unfortunately, Governor John Bel Edwards vetoed the bill, due to political pressure and misleading information. The veto may be seen as a defeat, but the conversation SB 462 sparked for using incentives to drive affordable housing is a win for us.

I don’t think it would be a stretch to say that we, as an association, stood tall after the many battles we went up against in 2018. We helped cool down lumber prices, pledged to train and educate the future home building work force, and fought backwards policy proposals.
Protecting and serving this industry is one of the noblest causes a person can enlist themselves in — at the end of the day, we build shelter for our neighbors. 2018 was an eventful year, and we look forward to the challenges and opportunities 2019 presents. 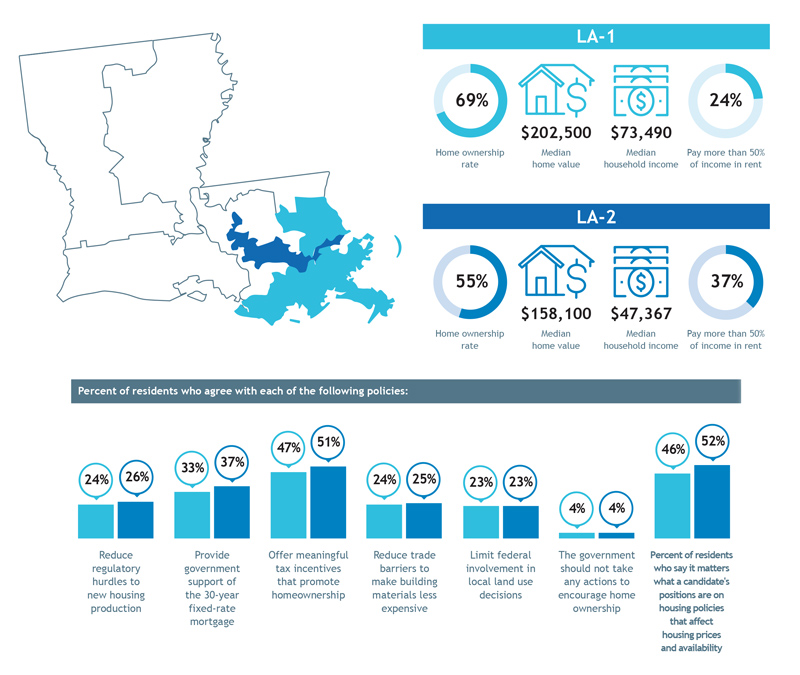