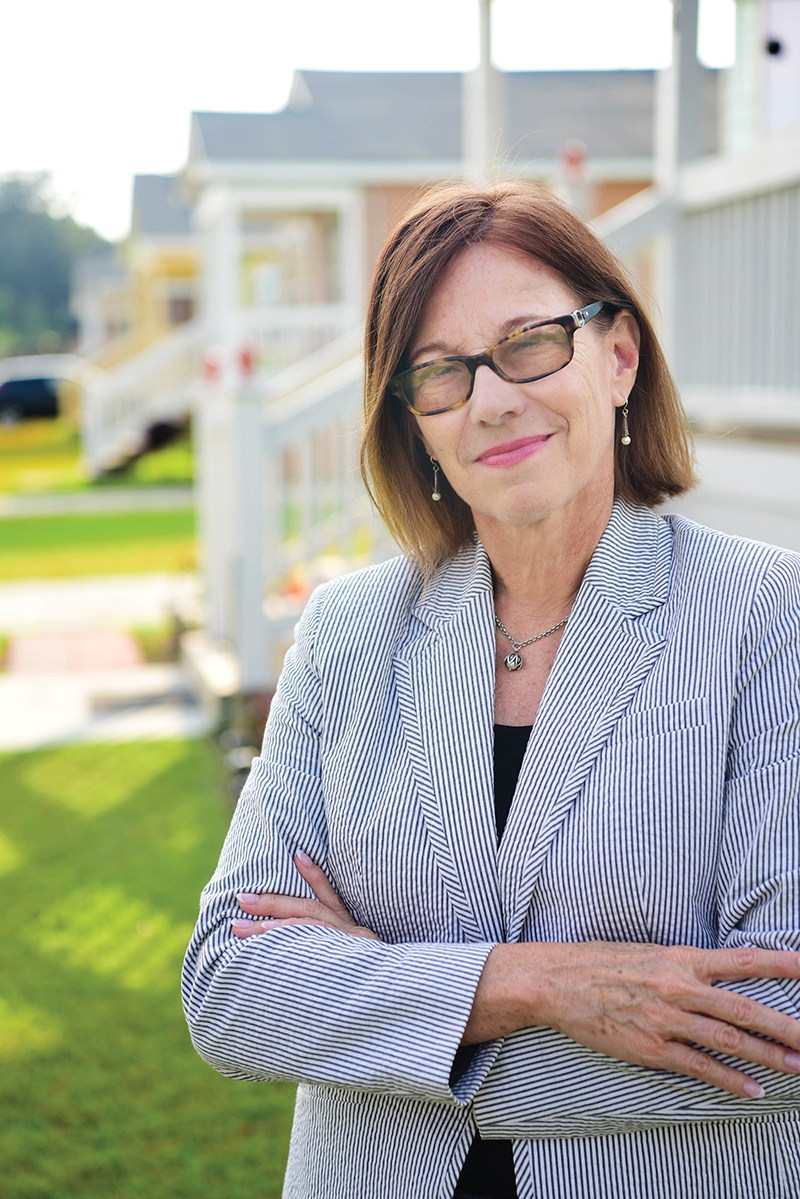 This January, singer-songwriter and WWOZ DJ Cole Williams closed on her 1,250-square-foot camelback in Central City. She and Snoopi, her tiger-striped cat, are now quite contentedly settled into their cozy home with its $846.10 per month mortgage.

Williams’ home is yet another product of New Orleans Area Habitat for Humanity (NOAHH), a nonprofit committed to making substandard housing a thing of the past. Actively fighting the city’s affordable housing crisis, NOAHH believes no family should have to pay more than half of their paycheck to cover the cost of a home.

“Habitat for Humanity is one of the first organizations that embraced me when I moved here in 2015,” said Williams, a NOAHH family partner. “They worked with me to rebuild my credit and helped me to become a first-time homeowner. I cherish this opportunity and I am so mindful of what it means to own my own home. I just keep pinching myself. None of it would have been possible without Habitat.”

Habitat’s primary program makes homeownership possible for families who are unable to qualify for traditional home loans but have a stable job and are willing to contribute 350 hours of their own time, which the organization calls “sweat equity,” to the building of other Habitat homes.

Williams personally put in 270 hours of sweat equity, with her additional 80 hours provided by the help of her friends.

“Because my house was a camelback, something they had not done a lot, it was subcontracted out,” Williams said. “So, I did most of my work on other houses. The hardest part for me was lifting all that heavy lumber.”

NOAHH is an independent affiliate of Habitat for Humanity International, founded in 1976 in Americus, Georgia, by Millard and Linda Fuller. Thanks to the personal involvement of former President Jimmy Carter and his wife Rosalynn, the awareness of this program has steadily grown to operations in all 50 states and more than 70 countries, resulting in more than 22 million people achieving strength, stability and independence through safe, affordable shelter.

Since its inception in 1983, NOAHH has built more than 630 homes for low-income families. The organization also operates The Habitat ReStore, which offers new and gently used building materials and home furnishings. Two locations serve the community at 2900 Elysian Fields and 2425 Williams Blvd. in Kenner, with all proceeds benefiting NOAHH.

In addition to constructing new homes, in 2012 NOAHH began “A Brush With Kindness,” a home repair service for area homeowners. Typical projects include wheelchair ramps, siding and roof repair, door replacement and landscaping.

NOAHH also runs Habitat Urban Gardens, a program in which the organization partners with 12 local nonprofits and businesses to use Habitat lots to grow produce, cultivate fruit trees and more, which are made available to local communities and restaurants.

NOAHH has 30 full-time employees. The organization’s longtime director, Jim Pate, recently retired to spend more time on social justice issues. The role is now being filled by Marguerite Oestreicher, who was formerly in charge of NOAHH’s development efforts.

“Homeownership is not just good for neighborhoods, it’s good for business,” says Oestreicher. “Research shows that higher rates of homeownership go hand in hand with job stability. When someone buys a home, they are deeply vested in their work and their community.”

Construction volunteers comprise the foundation of the NOAHH homeownership program, often working alongside NOAHH partner families to build homes from the ground up.

Local businesses provide much of the volunteer labor. With guidance from NOAHH, companies can customize their build days, which could include a special speaker and a catered lunch. All build days include teamwork experiences and ample opportunities to give back to the community. This kind of volunteering not only helps NOAHH but also benefits the business owners and their employees.

“Businesses that volunteer with Habitat learn that it can be the ultimate team-building experience,” says Oestreicher. “On the construction site, cooperation and communication are the keys to success. Owners might discover some of their employees have construction skills, so the office manager could become the boss over the CEO for the day.”

Jim Oliver, general manager of The Ritz-Carlton, New Orleans, whose employees often participate in build days, believes his employees’ efforts reflect the values Ritz-Carlton holds as a property and company.

“Habitat is a fantastic organization that has helped many in our community, specifically hospitality workers, which are the heart and soul of the New Orleans economy,” he says. “Assisting with Habitat builds is a wonderful way to help take care of those that take of our guests throughout the city each and every day.”

It costs about $95,000 per house to build a Habitat house. This includes the land, building supplies, professional services (foundation, electrical, plumbing, etc.) and management of the volunteer work.

Families apply for homeownership with their local Habitat for Humanity. Each local Habitat’s family-selection committee selects homeowners based on three criteria: the applicant’s level of need, their willingness to partner with Habitat and their ability to repay a mortgage through an affordable payment plan. Along the way, future homeowners are also required to take classes in financial education.

“At Fidelity, we’re always looking for opportunities to support the communities we serve,” says Chris Ferris, CEO of Fidelity Bank. “We are owned by our account holders, which means we need to make a real impact. Habitat allows us to do so because affordable homeownership is both meaningful and sustainable. Helping people buy and own their own home creates better and stronger communities for everyone.”

When Williams was growing up, she thinks she was a bit lazy and fairly nonchalant about her parents’ home.

“I didn’t put the care into my home the way my mother always did,” she says. “But now I understand. I don’t want to scratch my floors or put marks on the walls. I’m respectful of my house and I only want to invite good people into it, those who will respect the blessing that I am so grateful to have.”

10 to 12 homes built a year prior to Hurricane Katrina

25 to 30 homes currently built a year 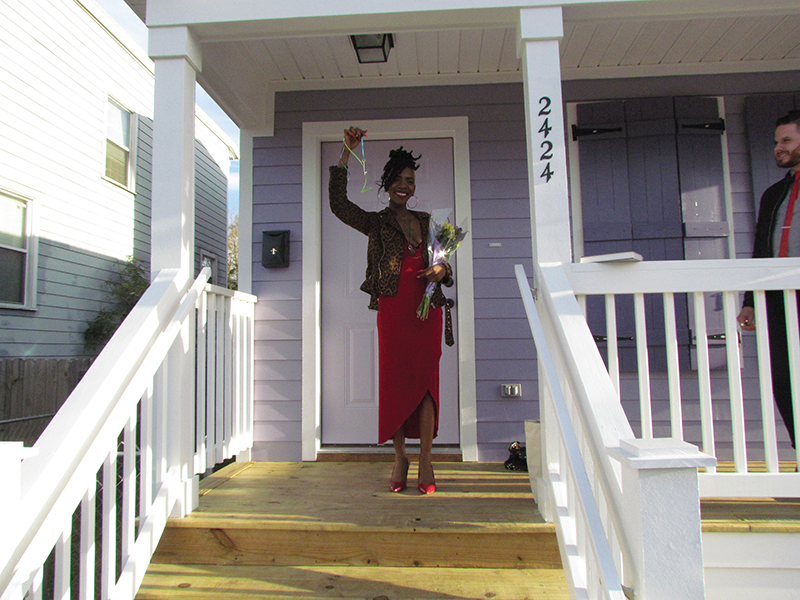 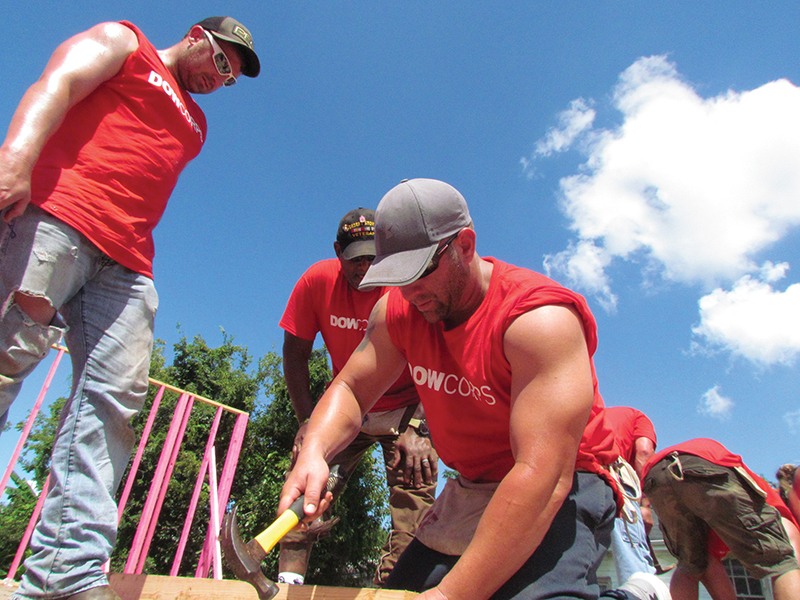 To build homes in partnership with sponsors, volunteers, communities and homeowner families, whereby families are empowered to transform their own lives, and to eliminate substandard housing in the New Orleans area while serving as a catalyst to make decent shelter a matter of conscience and action.

Current Needs
Volunteers to work at building sites and in the ReStore.

All volunteers must be at least 16 years old. For those under 18, an adult must be present with them while volunteering.

Companies can schedule a build day for employees. Corporate groups interested in partnership should contact Jim Dempsey at (504) 861-4121.

Shop at the Habitat for Humanity ReStore and/or donate new and used building materials, furniture and appliances.

In late 2005, Harry Connick Jr., Branford Marsalis and NOAHH created the concept of Musicians’ Village, a neighborhood designed to preserve the musical heritage of New Orleans. Today, it sits on an 8.2-acre tract of land and consists of 72 single-family homes, five elder-friendly duplexes, a toddler-friendly pocket park and the Ellis Marsalis Center for Music.