NEW ORLEANS – On Tuesday, May 10, 2016, The Baker Ellis Spirit Award was presented to alumna and Life Trustee Adelaide Wisdom Benjamin, Class of 1950, and to McGehee parents, grandparents and Trustees Fran and George Villere.

The Baker Ellis Spirit Award was created in 2005, when a McGehee alumna wished to honor members of the McGehee family who give ceaselessly of their time and talents in the service of the school. The Award was named for its first recipients, Gary Gillis Baker ’52 and T. C. W. Ellis, III.

The Baker Ellis Award is McGehee School’s highest honor to give. It recognizes exceptional service in dedication to the continued growth and excellence of the premier independent girls’ school in the city of New Orleans.

McGehee reps said in recognition of their decades of service, leadership and support, Benjamin and the Villeres were deserving winners of this accolade. Between them, they have served in every capacity at the school, from room parent to Life Trustee, as well as lending their names to buildings (Benjamin Hall and Mathilde Villere Young Hall) and endowing faculty continuing education scholarships. 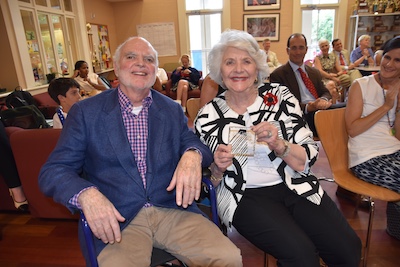