Chandeliers, candelabras, crazy outfits, big hats, fireworks, even the odd marriage proposal: “You have to see it to believe it,” says Ronald Evangelista, the director of operations for the Spears Group, which has managed Diner en Blanc since its arrival here in 2012.

When it comes to partying, New Orleanians consider themselves innovators, not imitators. So the phenomenal success of Diner en Blanc, an annual pop-up picnic event that originated 27 years ago in Paris and now takes place in 70 cities worldwide — including New Orleans — may be a bit surprising.

But to the organizers of Diner en Blanc New Orleans, the enthusiastic reception makes perfect sense in a city that prides itself on entertaining: “New Orleans is a very foodie city,” says Evangelista. “People use Diner en Blanc as a showcase for their own personal culinary skills. They prepare four-tiered cakes, lobsters, gourmet salads… It’s a good way for them to express themselves through their food, outfits and table decorations.”

The concept is as follows: Participants pay $45 to attend the event. Guests who attended the previous year are automatically welcome to return. New guests who wish to participate must either be invited by a member or sign up on the official waiting list, which is first-come, first-serve. Attendees must wear all white and bring their own tables, chairs, food, and table settings, which are often quite elaborate. Guests are taken to the event site, which is not announced until the last minute, by chartered vehicles, then proceed to set up the open-air dinner spectacle themselves under the guidance of their experienced group and table leaders.

The concept has certainly caught on in New Orleans — last year’s event drew 2,000 attendees to Spanish Plaza and a waiting list of 11,000. As local interest in the event continues to grow, so too do the ambitions of the organizers — Evangelista, Spears Group President and CEO, Cleveland Spears, III, and Director of Public Relations and Community Engagement, Malana Joseph Mitchell, along with a team of colleagues and dedicated volunteers. They consider last year a “breakthrough” and look forward to building on that success with this year’s event, scheduled for May 28.

Diner en Blanc’s Parisian roots stem from a group of friends who were meeting for dinner and agreed to wear white so that they could locate one another easily. That gathering evolved into an annual tradition, leading the Montreal-based grandson of one of the founders to create the Diner en Blanc organization, which has spread the concept to every continent except Antarctica. “If you name a city, Diner en Blanc is probably there,” says Evangelista.

In 2012, one of the present-day group leaders of Diner en Blanc New Orleans attended the event in New York City and loved it so much that she wanted to bring it home. She contacted Cleveland Spears, who did some research and hosted the first event in New Orleans in 2013 — at the Port of New Orleans beneath the Crescent City Connection. There were 900 people in attendance.

Not only has the event grown to attract large numbers, it also makes sure those numbers leave happy. The Spears Group surveys attendees, and last year’s approval rating was over 90 percent. “That’s phenomenal guest satisfaction — the results were through the roof,” says Evangelista. Those results didn’t escape the notice of the international organization, which awarded Diner en Blanc New Orleans a three-year contract extension (the standard is one year). As a nod to their success with the event in New Orleans, the Spears Group is now hosting Diner en Blanc in Houston and Atlanta as well.

In a city with no shortage of entertainment options, what makes Diner en Blanc so enticing? The unique venues, for starters. “Part of the allure of the event worldwide is having dinner in an outdoor space where you normally can’t — Rodeo Drive, the Eiffel Tower, Sydney Opera House,” says Evangelista. “Not many people can say they had dinner at Spanish Plaza by riverboats, or under the Crescent City Connection.”

There is also a sense of community that sets Diner en Blanc apart from other festivals or gatherings. “You can walk around, and people offer you food and drinks — people you’ve never met before,” says Evangelista. 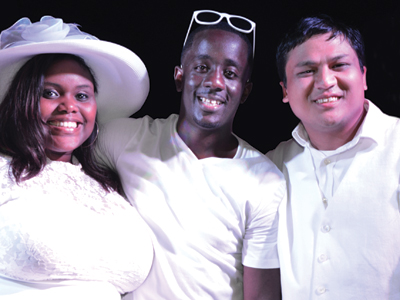 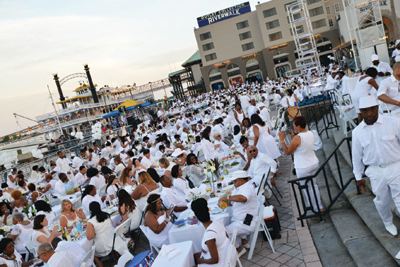 The organizers also take pride in the diversity of the participant group. “A big piece is bringing together a cross-section of people from different walks of life — younger, older, different ethnicities,” says Mitchell. “It’s a way to pull people together v there’s just something so special about the event, especially in a city like New Orleans where we have a unique melting pot of people.”

Given the lengthy waiting list, the demand is clearly present for a larger event. But growth is something that the organizers of Diner en Blanc New Orleans eye with caution. “The first priority is to make sure the event is enjoyable to all guests,” says Evangelista. “We never want to make it so big that we lose the enjoyment factor, or have people crammed into a small space.” Based on last year’s success with a group of 2,000 participants, the Spears Group believes they could increase the size to 2,500 or 3,000 without compromising quality.

Diner en Blanc also strives to make the event accessible at a low price point to ensure a diverse group of participants. According to the organizers, the $45 registration fee is divided among expenses such as the rental of charter buses, a payment to the international group, a charitable gift and the remainder as profit.

One of the main factors in the event’s rapid growth is its presence on social media. “Last week, we put up our first post in about six months, and it had a reach of 45,000 people,” says Evangelista. “People are really excited about this event. And that’s not just related to what we post. We are most proud of our response from guests — they post as many pictures and videos as we do.”

“You know how we pencil in Jazzfest and French Quarter Fest?” says Joseph Mitchell. “For a lot of people, Diner en Blanc is their ‘must-do’ thing in May, and we have a lot of people who have continued to come since the beginning.”

While the basic concepts of the event — the white palette, the setup — are consistent in every city, the organizers of Diner en Blanc New Orleans know that people here appreciate certain local touches.

“What separates us from other cities is that genuine sense of fun,” says Evangelista. “The event is a little more high-end in other cities, but we do inject things that are characteristic of our city. We have had performances from the Brass-A-Holics, Big Sam, Mia Borders, Tanya and Dorise — the violinist and guitarist who play on Royal Street, the drum line from an elementary school, fireworks over the river. These are iconic New Orleans touches.”

The organizers also think people in New Orleans are accustomed to doing a bit of legwork for festivals. “I don’t know if any other city has festivals where they are used to lugging chairs and tables around,” says Evangelista. “We are set up for success on that end.”

“And even though people bring a table and chairs, it’s a card table,” adds Joseph Mitchell. “It’s not like bringing a 6-foot table to the event. The fun part is that once you start going to Diner en Blanc every year, you have your Diner en Blanc section of stuff you like to take with you.” There are even catering options for the convenience of guests who don’t want to cook.

The event is put on by the Spears Group and approximately 60 volunteers who help manage the guest experience — many of whom have been involved since the first year. According to the organizers, these volunteers are the secret to the event’s success.

“We get a lot of comments from guests about our strong leaders who are very enthusiastic and will do anything to make sure their guests have a good time,” says Evangelista. “They are the ones who communicate with guests, making sure they know what they’re doing and that they have fun. They will greet guests with a present to help get the ball rolling, and once we get to the secret location, they will help people set up. They are there to make sure everything goes smoothly.”

New Orleans kicks off the U.S. Diner en Blanc season each year, and will do so again on May 10 in an undisclosed location. The Spears Group isn’t giving away any secrets, but they are certainly feeling optimistic. “It’s going to be bigger and better,” promises Evangelista. “Last year was our breakthrough year, and we have a lot of plans to top what we did in 2015.”

And for those who might be put off by the rules and structure — a rarity in our laissez les bons temps rouler culture — Joseph Mitchell encourages them to give it a try. “Yes, there are a lot of rules — that’s the mindset most people have the first time coming,” she says. “But once they go and experience everything, everyone says the same thing: It’s all worth it.”

Helping Investors Succeed is Music to Their Ears