A Touch of Savile Row on Magazine

If James Bond were to fall out of the sky and into New Orleans today — likely beating up bad guys the whole way down — a strong bet would be he would land himself strategically at the door of 2049 Magazine St.

There, 007 would be greeted with his favorite cocktail (we can all recite that one as easily as our own) and a finely dressed team would gather around, attending to his every need — maybe sliding back a set of shelves to allow him to watch the big screen while they measure him for his new suit, or inviting him to enjoy a game of billiards while they fit him for a pair of custom, monogrammed shoes.

Since 2013, Luca Falcone Custom Clothiers has been offering everyone from celebrities to college graduates the chance to bring a little Bond into their life through a custom experience unlike anything they’d find outside of Europe.

From custom tuxedos to suits, shirts, blazers, polos, jeans, belts, ties, cufflinks and pocket squares, Luca Falcone does it all — ensuring men can turn to them to create an entire wardrobe capable of carrying them from casual day at the office to black tie galas.

While the focus is clearly on upscale elegance, Luca Falcone is determined to be accessible, which means you don’t have to be a captain of industry, or a British spy, to afford this Old World sartorial experience. The company offers three tiers for suits; a made-to-measure option averaging around $800; custom suits for around $1,200 that are created in New York and Spain; and the company’s highest level, the bespoke suit created by an in-house tailor that averages around $5,000.

Luca Falcone is filling a niche in a way that has resulted in a steady 25 percent growth in revenue each year since its inception. Currently, the custom clothier creates 80 to 85 custom suits every month.

The Man Behind the Bespoke

Northshore native Joe Rotolo comes from a family with a strong knowledge of business. His father, also Joe Rotolo, runs RCI, a landscaping maintenance and construction company out of Slidell that consistently ranks in the top half of the largest 100 landscaping firms in the country in terms of revenue, with RCI reaching $36 million in 2015.

The young Rotolo, however, knew early on that he wanted to forge his own path. “In college I took an internship in hospitality management as basically an excuse to travel, and then spent the next three years living and working in Germany in medical sales,” he says. “While there, I found myself surrounded by well-dressed people. There was this large Italian influence and I was determined not to be the sloppy American so, in addition to learning the language, I started wearing well-tailored clothing and I got my first custom suit made. That changed everything.”

With his father’s head for business and his mother’s love of beauty and style, Rotolo says he was driven to bring his new love stateside.

“I wanted to bring this home but I really thought, ‘Is New Orleans the right place for this?’” he says. “I came to the conclusion that it’s not about whether New Orleans is a suit wearing city, it’s about creating a feeling, a lifestyle. It’s about empowering men and showing them how they could dress.”

So why not Joe Rotolo Custom Clothier?

“Luca was actually my nickname growing up,” says Rotolo. “And Falcone is my grandmother’s maiden name. I tried out a lot of different name ideas and that one just seemed to stick. It felt masculine, and sexy, and it allows me to still pay homage to my family. Plus, Rotolo has a strong association with pizza.”

Luca Falcone is a true Italian clothier — all suits are created from fine Italian fabrics sourced by Rotolo on his travels to the country twice a year. “I deal directly with fabric mills and tailors which allows me to keep my prices down,” he says. Rotolo stocks everything from the most conservative fabrics to patterned velvet. “We have over 60 different seersuckers and hundreds of linens. Basically, if you see something anywhere or you can dream something up, we can create it. There are no limits.” 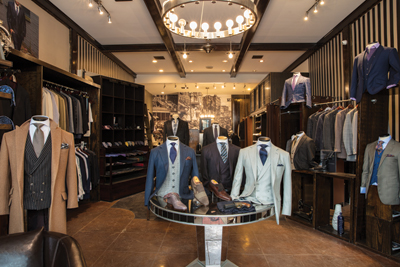 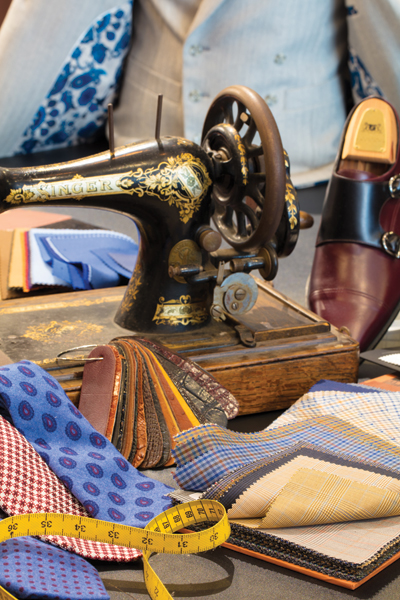 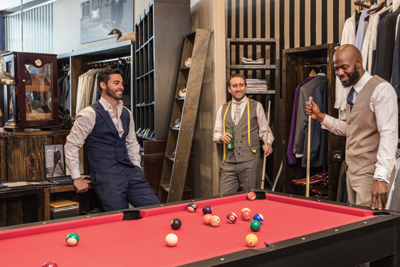 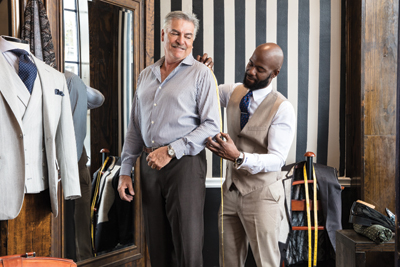 TOP LEFT: There’s no buying off the rack at Luca Falcone, everything is custom — from jeans and polos to tuxedos. TOP RIGHT: From leather to linen, Luca Falcone is stocked with samples to help customers create their own suits and shoes. BOTTOM LEFT: Rotolo says he’s created the perfect team with General Manager Rye Cooper and Custom Clothier Vashon Craft. BOTTOM RIGHT: “We take over 30 measurements and use devices to measure slope and posture,” says Rotolo of the extensive fitting process.

A year and a half ago Luca Falcone starting creating custom shoes handmade in Spain. “We use only the finest leather and suede from French and Italian houses, one of which is owned by Hermes,” says Rotolo. “We manufacture for over 65 brands worldwide and then we have our own brand, Falcone Shoes. Ninety-five percent of what we do is private label.”

With its shoes, as with its suits, the sky is the limit. “You can choose the material — even alligator or crocodile — the color, the heel, the laces, the buckles, everything,” Rotolo says. “We can even monogram.” Customers are invited to work with an in-house designer or use the store’s custom shoe designing software from the comfort of home. The turnaround time for shoes is four to six weeks. Prices range from $550 to $700.

Rotolo is quick to point out that his store caters to every man, whether they love to shop or not. “We really make it easy,” he says. “Once we have someone’s measurements and preferences on file they can just call and ask us for anything and we’ll take over.”

Capitalizing on the rise of Hollywood South, Luca Falcone has seen its fair share of celebrity clientele, including Gerard Butler and Stephen Dorff, along with a wide array of business professionals from near and far including Mark Sussman, president of CBS, and Frank Bombaci, co-founder of Vitamin Water. “We get a lot of people that come in for travel or for conventions that look us up,” Rotolo says.

And then there are the athletes. “We’ve worked with football players like Zack Strief, Malcolm Jenkins and Stephone Anthony,” he says. “Baseball players, however, I can’t name. They’re extremely secretive about where they get their clothes. It’s all about exclusivity.”

Rotolo says his goal for the year is to increase revenue by 35 to 40 percent. “We’ve been looking to bring our services to people’s homes and offices for a while now, but you have to have the right person to do that,” Rotolo says. “We have that person now.”

Rotolo says he’s currently looking at expanding the store’s footprint and possible adding another showroom location in the future. “There’s a lot of room for expansion on the distribution aspect of our B2B. With the shoes, I’d like to go from supplying to 65 brands to 100 in the next six months.”

The ultimate goal, Rotolo says, is to increase the company’s presence both locally and worldwide. “The biggest complement I ever receive is when people ask, ‘Is this a European brand?’ Not only are we unique for this region, we’re holding our own on the international level. I’m really proud of that.”

“You can never be overdressed or overeducated.” – Oscar Wilde

“Putting on a beautifully designed suit elevates my spirit, extols my sense of self, and helps define me as a man to whom details matter.” – Gay Talese

“Dressing well is a form of good manners.” – Tom Ford

“Well dressed men know that nothing worthwhile is ever outmoded, that a superb tailor’s work is ageless.” – Finis Farr

“It is totally impossible to be well dressed in cheap shoes.” – Hardy Amies

“Clothes make the man. Naked people have little to no influence on society.” – Mark Twain

The 1973 Bond feature, “Live and Let Die,” was partially filmed on location in New Orleans. It was the first Bond feature to star Roger Moore.